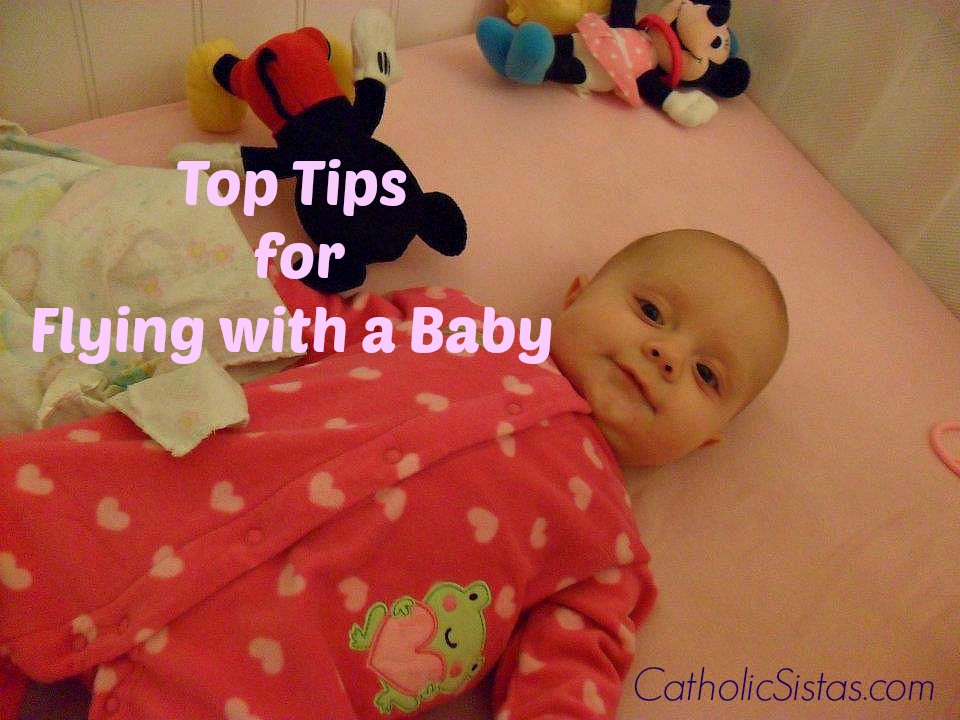 It wasn’t very long ago that I was a first time mom living in Colorado, with all our family in Michigan. Traveling was a plane flight, but at our first flight, I 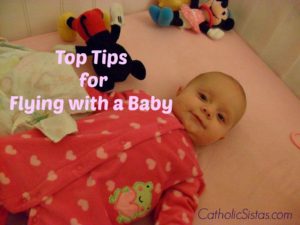 was scared- fearful of forgetting something, fearful of not being able to carry everything, and desperately hoping I would figure out how I was to bring all the gear I needed while flying alone (my husband was traveling for business, so I had decided to pass the time of the separation by taking the opportunity to visit family).

I ended up flying with baby Elizabeth a total of, I think, 9 flights between the time she was 2 months and 8 months old. During those flights, I figured out useful hints and tricks to make the flight smoother, more organized, and way less stressful. Preplanning, as with most things, seemed to be key, as well as knowing TSA and airport rules and procedures.  These hints are mainly geared towards babies, though some surely could apply to toddlers and small children (but since I have not flown since Elizabeth was 8 months old, I don’t have personally developed tips for beyond that age).

Timing:
“They” usually recommend people with infants arrive at the airport about two hours before a flight. I usually follow that, because it’s so much easier to wait around for a flight than to freak out and stress about going through security. Checking in and going through security can take a little longer with a baby, and you don’t have the ability really to run to your gate.

Luggage:
– Baby gear items such as carseats, strollers, and bassinet/pack n’ plays can usually be checked for free and not count against any baggage allotment that your ticket has.
-If you are planning to use a breastpump, I highly recommend putting it in your luggage and checking it; it’s a toss of the dice as to whether you will encounter problems trying to take it through security, and the last thing you want is to have to ship or toss a $200 piece of equipment that you really need to use.
-If you formula feed, I recommend putting your formula containers and extra bottles in your luggage to check.
-Pack a thermometer and infant fever reducing meds, as well as any teething or other infant meds/supplies. Murphy’s law says that your kid will get sick while on a trip when you don’t have access to a thermometer or fever reducer. And this isn’t even taking into account the increased likelihood of illness due to horrendous airport and airplane germs. 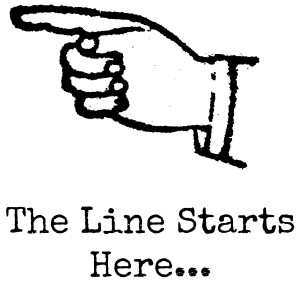 Security:
-I recommend either wearing baby or taking baby in an umbrella stroller that is easy to collapse with one hand (or hand and foot). It makes life easier, and you don’t have to put baby down. I’d only recommend using a travel system (stroller+carseat) if you are using the carseat on the plane–baby having his own seat.
– If you wear baby, you will need to have your hands swabbed by security to be tested for explosives residue (standard practice since they can’t see if you have something between you and baby). One caveat: An acquaintance once shared how she was detained and searched when the explosives residue test was positive. She had just come from the bathroom where she had changed her baby’s diaper. Apparently some baby wipes can trigger the test or have a similar/same compound, so it’s a thought to change your baby before going to the airport and then refrain from changing them again until you have passed through security just to be safe.
-Wear slip on shoes that you do not even need to touch to put on, such as flip flops or clogs.
-If you formula feed, I recommend using ready-to-feed bottles and just bringing along the ring and nipple. The ready to feed bottles are sealed, easy for airport personnel to recognize, and they will spin it in a machine and be done, rather than questioning powders and whatnot. The last thing I wanted was a strip search and anal probe over wanting to take an open container of Similac powder on a plane.

-I used a backpack and made it very organized from the start, putting toys and bottles (if formula feeding) in the most accessible pockets.
-Pack one extra outfit for you, and one extra for baby. Chances are you won’t change baby on the plane because, quite frankly, there’s no good place to do it, but it’s nice to have the option when getting off the plane, especially if your kid is like mine and does a giant spitup in the first fifteen minutes of the flight while flying solo with them while the person sitting next to you is seemingly annoyed that children even exist.
-2-5 diapers or wipes, depending on baby’s age and frequency of wetting, as well as how long your flight and possible layovers are.
-One or two burp cloths can save your clothes and baby’s from spitup.
-A blanket–seems obvious, but at 5 months or so, Elizabeth became SO stinkin’ curious about the world, that she really did not want to nap even when tired if there was much going on around her. So the blanket to overwarm her, and drape over her head to reduce stimuli was SO helpful.
-Two or three small toys that are not things she had seen in a while and were attached to links…when Jason flew with her, he attached them to his shirt. Stretched the heck out of his shirt, but the toys stayed off the floor and provided extra fascination.

On the plane:
-Immediately upon getting in your seat, situate your things. If you brought something to read, put it in the seat pocket. Also stuff into the seat pocket the toys, the burp cloth, and any bottles to use during the trip if formula feeding (along with the nipple(s)) or your nursing cover if you use one. I suggest this because of how difficult it is to access things with a baby on your lap when you have to stuff the backpack/ diaper bag under the seat in front of you, and most of the time the person in front likes to recline their seat, reducing the room a little more.
-Feed a bottle or nurse on the way up and the way down to reduce ear popping issues. If you are at the point of snacks like cheerios or whatever (at 5 mos we weren’t quite there yet at that point I don’t think), save those for the middle of the flight to abate any fussiness.
-Get the can for the free drink (you have to request it as a can when you are asked what you want to drink) and ask for an empty cup. The empty cup is a decent toy to preoccupy, and getting the drink in the can rather than those little cups reduces the likelihood of spillage if your baby lunges for it or otherwise bumps your hand 🙂

-Afterthought: the advice regarding formula in the security section is for the formula needed for on the plane. I also recommend, when bottlefeeding whether it’s breastmilk or formula, bringing extra just in case your flight is delayed or you are waiting a while. You want to bring enough for your flight and just a little more in your carry on and pack the rest that you will use during the trip in your checked luggage.

The general idea behind these tips is to help you to tailor what you bring to balance what you need and what you can actually carry, as well as making life a little easier while on the plane. Remember: generally, less is more, even with babies!

What are your tricks to keeping your baby happy while traveling by plane?