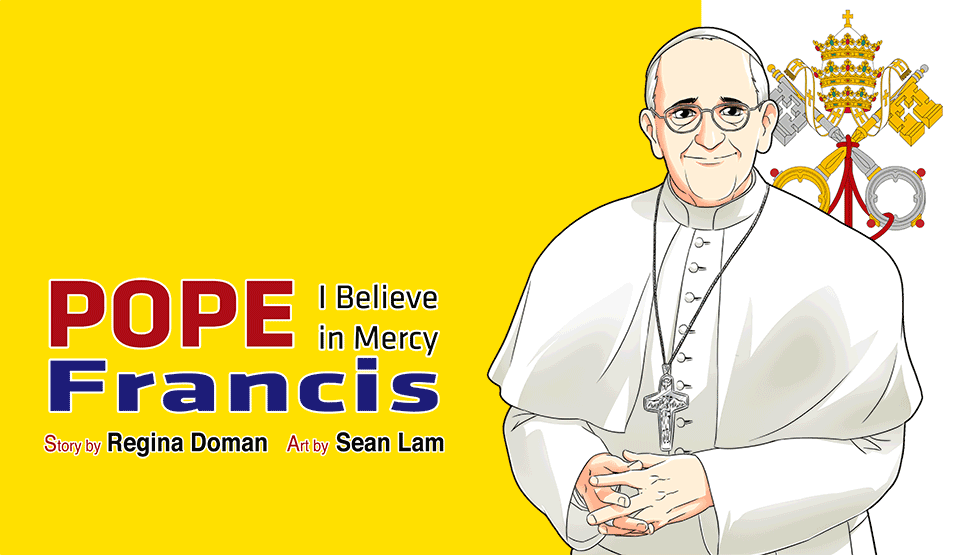 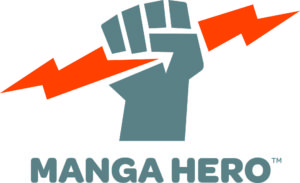 For Christmas this past year, St. Nicholas brought two of my kiddos new books I had not seen before. Intrigued, I opened the book…from the BACK…and read BACKWARDS.* The kids – ages 13 and 9 – were completely taken by them and read them cover to cover almost as fast as they tore the wrapping paper off. Manga books, I was told by the 13 year old boy. They are supposed to be read backwards, Mom – don’t you know anything?!

My son quickly asked if I could contact Manga Hero and see if they had other books. And now you know how this post came to be, friends.

In the short time since Christmas, I have bought three more books and Manga was generous enough to send a copy of the Pope Francis book for me to look over in preparation for this interview. The artwork is stunning. Designed to mimic traditional comic artwork, it has a certain Japanese flair to it. It’s certainly different. And engaging. Did I mention my 13 year old son was jazzed about this? You are now thinking about Easter gifts for your favorite sons, godsons, nephews, right? Though there are six books, they are flying off the shelves and Manga Hero currently has only two available for purchase, which can be found on the store page. 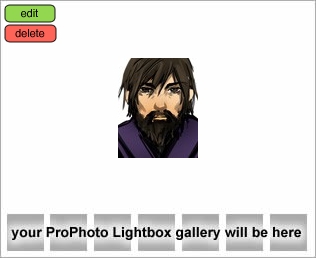 If you’re wondering what Manga Hero and graphic novels are all about, visit their about page to learn more. And now, an interview with the creator of Manga Hero, Jonathan Lin, as well as special feature interviews with author and illustrator of Pope Francis: I Believe in Mercy, Regina Doman and Sean Lam.

When and how did Manga Hero get its start?

I was talking to my mom and dad about starting a business, and we were batting around different ideas. Then my dad asked how come there are no manga on the Bible or the saints? I was thinking, oh yeah, how come there aren’t any? That’s when the idea for these projects was born.

Also, I’ve always wanted to do something that positively impacts society. With media playing such an influential role in our culture, especially on our youths, I felt this was an area that I could make a difference.

What was your first book and how did you decide on that one?

Our first book was on St. Paul of Tarsus. I think the writer, Matt Salisbury, frames it quite well on why we decided to tell St. Paul’s story… “We believe in engaging readers, Christian and non-Christian alike, where they’re at. Our goal was to emulate Paul’s own mission of inclusion leading to truth. If the book sparks interest in Scripture or aspiration to live as Paul did, we’d have been very successful!” 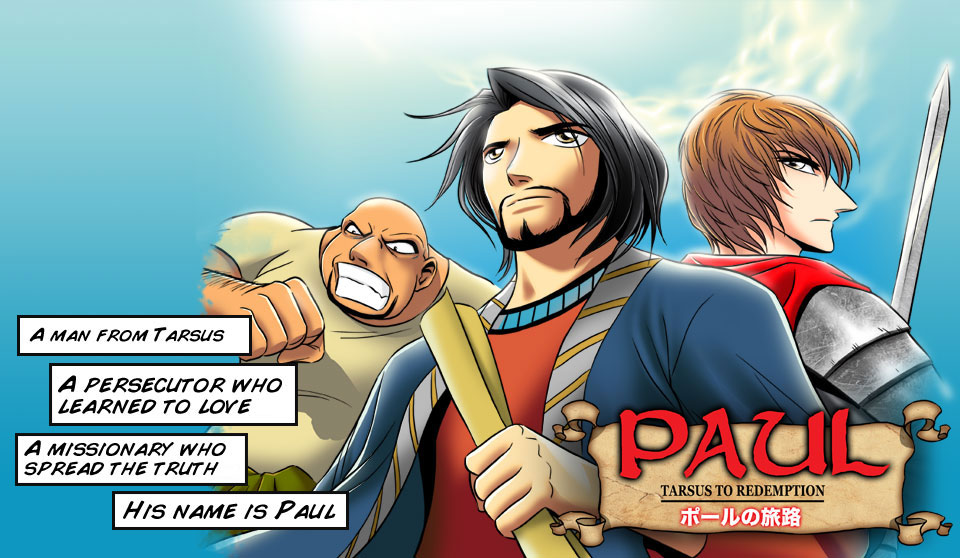 Who is your intended audience and why?

Our intended readers are tweens and teens, and any fans of all ages of graphic novels looking for something very unique. There is an opportunity to reach out to people with an attractive form factor like graphic novels to transform our culture and inspire interest in the faith, especially its message for young people.  Graphic novels are considered a cutting-edge form of entertainment and offers easy reading for all age groups.  Pope John Paul II called for the use of new and different forms of media to reach young people where they are in order to build a culture of love and dignity. This is one such medium.

Do you have plans to write more books and whose lives do you plan to write about next?

Yes, we are working on graphic novels about St Maximilian Kolbe, Esther, and Fr Vincent Capodanno.

How long does each book take to write and illustrate?

It takes almost a year to write, illustrate, and edit a book. We want to make sure the book not only grabs the reader, but also stays true to the subject matter and is consistent with our faith teachings.

On Pope Francis: I Believe in Mercy

Regina, how does writing for a Manga style book differ from traditional book writing? Were you able to transition seamlessly from one style to the next? How did the idea for the books about the popes come about?

Regina Doman, author: I was trained as a scriptwriter, so I actually drew on my script-writing background to write the manga comic. (We actually call the written outline for a manga book which is given to the artist a “screenplay.”)  But I did have to learn the format, but Jonathan (my publisher) and Sean (the extremely talented artist) did a lot to help me out. Manga is image-driven and dialogue driven, but people tell me that my books read like movies, so maybe that’s just how my imagination works! It was exciting to learn something new, but I found it came fairly easily to me. I would love to write more manga.
It was my publisher’s idea to do a book on Pope Benedict, and he had asked one of his writers to do it. But then she decided to enter the convent, so Jonathan asked me to take over the writing. I went on retreat and spent three days writing the 200-page book on Pope Benedict and had a marvelous time. For the Francis book, we didn’t have as much time, and it was shorter, so I sort of crammed it in between doing edits on my last novel, Rapunzel Let Down. But I loved doing the research on both men’s lives. They are so different! I discovered that Pope Benedict was a kind of quiet genius who liked asking “impudent questions” and thinking about things deeply. But Pope Francis was a natural leader, very comfortable with exercising authority, with a poetic and creative streak to him. It’s been so interesting to see how that was (and is!) reflected in their papal ministry!

Sean, how did you get your start in illustrating Manga?

Sean Lam, illustrator: In Singapore, we read a lot of graphic novels ranging from Marvel to DC Comics to Japanese manga. I started reading a lot of manga during my college days, and immediately developed a huge interest in the particular art style and have been enjoying exploring as well as developing my own manga style to date.

How do Manga illustrations differ from the traditional style of comic artwork?

Manga is another form of comic art style in story telling, but it is more stylized instead of realism. It emphasizes more on dramatic panels delivering some pretty strong melodrama, thus capable of caring vivid messages to readers, evoking a sense of reality in the story.

Manga is so stylized – how do you capture the unique personalities of the different characters you draw?

It is also the this particular stylized art style that enables me to play with more exaggerate forms and thus creating a wide range of distinctive unique looking individuals who can show their different personalities through their looks alone.

“It’s always exciting to see the lives of such holy and heroic people promoted and to see their stories being told. It’s particularly pleasing to see how the Manga Hero books are reaching out and delivering these stories to young people in a popular style they can relate to… Manga Hero books are fulfilling an essential role in the Church’s mission of bringing the fullness of the Gospel of Jesus Christ to the entire world.” – Tim Staples, Catholic Evangelist

“I can’t get enough of these great books, designed to both entertain and inform.”
– Lisa Hendey, founder of Catholicmom.com

“The books are excellent for tweens and teens (and adults, too) and should be spread around. Evangelization comes in many forms and this manga format may just be the answer to those who need to hear the Gospel message.” – Mater et Magistra Magazine

Hello family, I want to recommend these great comics about the life of Pope Francis and Pope Benedict XVI. I think they are a great way to have the children and young people interested in the lives and work of these two great Popes. God bless!

“At last – Catholic manga that’s as good as the popular stuff. I overheard my daughter’s friend say, ‘I always think of popes as always being popes. I never think of them growing up.’ This manga will give kids such good thoughts.”
– Mike Aquilina, Executive Vice President, St. Paul Center for Biblical Theology, Author, EWTN Host & Catholic dad.

Manga will be participating in our Easter giveaway, which will run in early March!

*While initial prints were written back to front, the books are currently being converted front to back – Western standard – based on feedback and with larger print, such as the Pope Francis book. Anticipated conversion of all books is set for late 2015.

2 Replies to “Manga Hero: A New Catholic Book Is in Town”