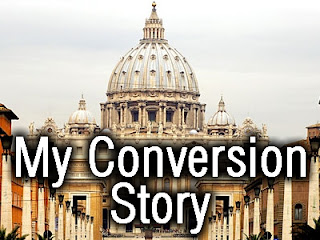 Catholic Sistas welcomes the second installment of seminarian Craig DeYoung’s beautiful conversion story. You can read the first part of Craig’s story here. Please check back soon for the next installment in this inspiring series.

In Part I of my conversion story, I emphasized how God’s presence in my life was hidden but active.  Last week,  I discovered how he was more active than I have even remembered.  My mother and I were able to revisit my early life from her point of view, something I have never had the courage to do before. God, it seems, was very present to our family though my mother.

Early in the life of my brother and I, my mother took us to Sunday school on a regular basis, taught us about God, and taught us to pray each day. We attended church regularly, though I remember none of it. However, she told me she didn’t believe in Christ, but in God, and was undecided about Christianity. Essentially, she was an agnostic theist, too, though she wouldn’t use the term. As it turns out, I was more like my mother than I’d ever known.

As you’ve seen,  God was tilling the soil and planting the seeds for conversion from the earliest moments of my life. By means of grace, he had begun his good work and was bringing it to completion, as he still is even now.  In Part I, I left off with a happier period in my life and to my memory, the best of my childhood.  It was the calm before the storm.

My family was a typical secular family and like many such families our ship wrecked upon the shoals of divorce. Up until this time, my family had already moved many times and one of the wounds of my heart was feeling like I didn’t have a home, a feeling which only became worse after the divorce.  It was while moving from Arlington, Texas to Georgetown, Texas that my parents began to have more serious marital problems, which ended bitterly with divorce.

I don’t condemn my parents for divorcing.  Right or wrong, it happened, just like so many other miseries in the world. It’s enough to say that their divorce is the single greatest wound I carry on my heart. At the age of twelve, my world fell apart.

At the time we were living in a duplex and I remember the anger in the house.  There was fighting, screaming, and yelling.  When the divorce happened, my father moved out while my mother, brother, sister, and I stayed in the duplex. As a family, we went from having some money to having practically none.  My brother and I started receiving free and reduced lunches at school.

The tension and the pain of all that happened was unbearable. Everyone found their escapes. My father escaped into work. My mother into alcohol and her boyfriends. My brother used drugs.  My sister, who was only three or four at the time, got the worst of it and I have no idea how she coped. I escaped into fantasy books, TV, video games, and acting out through vandalism and fighting.

My father struggled to make ends meet while paying lawyers and child support. My mother started dating and going to school to become a nurse. Her schooling was paid for by a full athletic scholarship she received for running. Schooling and running then became her primary focus and occupied most of her time. The rest of her time was occupied by surviving and taking care of us.

Among the children, my mother’s  time was mostly filled by caring for my sister Rebecca, who was still very young.  My mother was responsible for too much.  The consequence was that Doug and I were mostly left to ourselves and we became more and more self-sufficient. After a time, Doug began getting into trouble and using drugs.  Then came the fighting between him and my mother; screaming, yelling, and punching walls was common.  I cried a lot and retreated even further into myself. Any notion or thoughts of God had fled long since the divorce. I was too busy surviving to care, though had I known it God would have been a better refuge.

During all this, we were visiting my father every other weekend, attending school, and running wild. There were too many happenings to recount, but I was very unhappy during this time. It was then I decided to go live with my father. I think I might have done anything to get out of my living situation.  There was a court date and I had to tell the judge that I wanted to go live with my dad. It was finalized and I went.  I know this decision deeply wounded my mother and has had far-reaching consequences.

A year after the divorce, my father remarried and I moved to a new home in tiny Bruceville-Eddy, Texas with him, my stepmother,  my stepbrother Nik, and a new brother on the way. My father and stepmother went to work early and got home late and because he was older Nik was always off doing his own thing. I was even more on my own at my dad’s than I had been at my mother’s, but at least there was no fighting.

Did I have any faith during these lonely times?  I suppose I might have had some as a pure gift from God.  At one point, my dad gave me a Bible. He hadn’t given me any particular instruction along with it, but I tried to read it from cover to cover. I got through Genesis and quit reading. But prayer stuck with me and I remember at the darkest times praying to God.  In those moments God was a final refuge but when difficult situations became easier I soon forgot him.

Once, I went to a Baptist church with a friend from school.  There was an altar call and I went up.  Something in me longed for what God was giving.  I’d grown raw with emotion during the time of the divorce. In some ways, my heart was super sensitive but in other ways, I was numb from  feeling too much, too often.

During high school, we moved again. This time to Temple High School, a large school in central Texas. It was very different from little Bruceville-Eddy. My freshman class was something like 900 students. Most of the time, I felt like I was on the outside looking in.  I played sports but had few friends, nor did I really know how to have a friend. Outside of classes, I was absorbed in online video games.

The few friends I did have were agnostic or atheist. Sometimes other students would ask me what I believed and I’d say I was a Christian but not mean it. To me, “Christian” was just a word; I knew nothing about it. For example, I thought reincarnation was a belief held by Christians. I had no inkling that Christ was the Son of God come to save or any of the rest.  To me, God was still a stranger.

I certainly thought there was a God in a vague and general sort of way, but I didn’t think you could truly know him.  Frankly, I didn’t give it much thought, but when I did, my thinking sounded like, “Yeah, there’s probably a God, but who knows which one it is or what he’s like?”  God was an unknown so I didn’t worry about him much. Somehow, through the events of my life I had become an agnostic theist.

This was my thinking through high school and into the early part of college. It wasn’t a very happy life, but nor was it a horrible one.  Everything was simply blah. I’d been wounded by divorce. I felt very much on my own and longed for companionship. More than anything, I felt empty and was ready for something more. And in college, I was about to find it.

Coming next: the third chapter of my conversion story from agnostic theist to seminarian. Hope you stick around for Part 3!

7 Replies to “From Agnostic Theist to Seminarian: Part 2”