Confessions of The Original Online Junkie: One Does Not Simply Let Teens Play on the Internet

If you’ve been following Confessions of The Original Online Junkie series so far,

you know that today’s post was inevitable – teens and the internet. 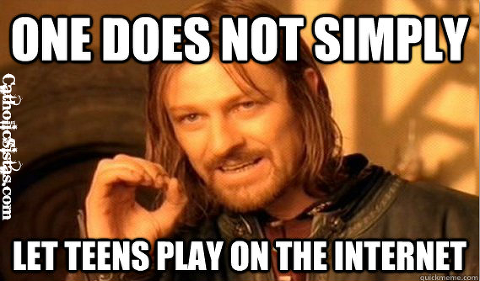 Oy, where to start?

Grab some Pepto, or some alcohol, maybe both – this is going to be rough.

As parents, we are not only the primary educators of our children,

we are the keeper of their hearts and protector of their souls.

This is the stuff we will stand before God and plead our case.

Did we do our job adequately or did we fail our children?

did we think it more important to be their friend, their equal?

Friends, this is what keeps me awake at night. I know full well that these children were gifted to me and my husband by God. They aren’t ours – they are on loan to us, to be rightfully returned to Him at the end of their lives. We want to be able to stand before Him and humbly say I did my best, Father. Have mercy on me, a sinner.

I have the odd and unique experience of having been the teenager on the internet in the mid-90’s and now being the current parent of a teenager {17 year old girl} and a tween {12 year old boy} with a gaggle in tow at 8G, 5B, 3G, 1B, I hope I can offer some perspective that will help aid you in some decisions concerning your teen, your family, yourself and/or your marriage and social media use.

Are you ready? Let’s rock this! 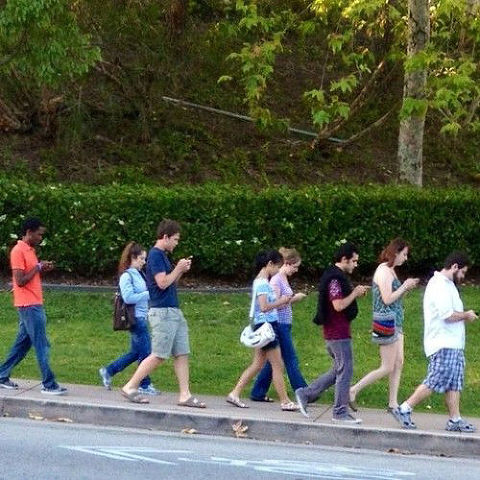 So, what’s a parent to do these days? In a world that is supersaturated with social media and screen time of one variety or another – not using your smartphone? Can I interest you in a game of MineCraft? Or some television? Netflix? Amazon Prime? Roku? Angry Birds on the iPad, perhaps? Aaaaand circle back to the smartphone.

A few months ago two things happened that prompted me to take a closer look at the issue of teens and social media. One was an article put out by a fellow Catholic momma and Austin Catholic New Media blogger, Kathryn, in which she beautifully addressed tips for parents on teens and social media. I want to expand on this great resource with the hope that more Catholic bloggers of teens will write about their experiences and what worked for them.

Here is a handout I put together on this very topic and with it, some great resources to further your research.

« Channeling Jesus on Aisle 5Come Holy Spirit, Give Us Fidelity »