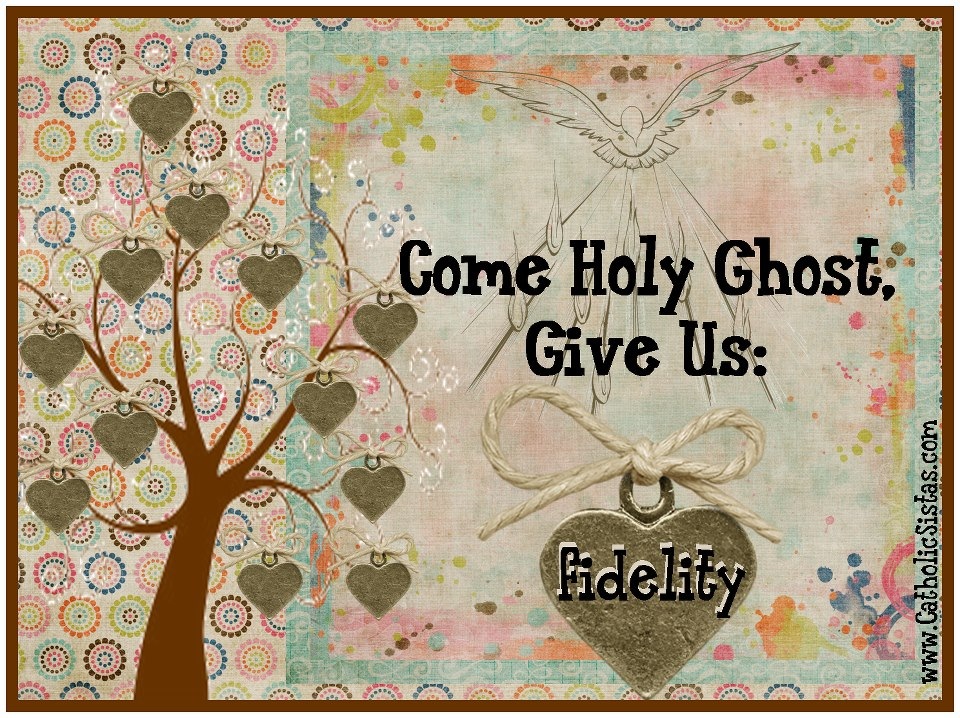 This is the ninth of a 12-part, once-a-month series on the Fruits of the Holy Spirit. This month’s fruit is FIDELITY. Be sure to see previous posts beginning with CHARITY and check back next month as another contributor explores the fruit of MODESTY.

The tax collectors and sinners were all drawing near to listen to him, but the Pharisees and scribes began to complain, saying, “This man welcomes sinners and eats with them.”

So to them He addressed this parable.

“What man among you having a hundred sheep and losing one of them would not leave the ninety-nine in the desert and go after the lost one until he finds it?

And when he does find it, he sets it on his shoulders with great joy and, upon his arrival home, he calls together his friends and neighbors and says to them, “Rejoice with me because I have found my lost sheep.”

I tell you, in just the same way there will be more joy in heaven over one sinner who repents than over ninety-nine righteous people who have no need of repentance.

Or what woman having ten coins and losing one would not light a lamp and sweep the house, searching carefully until she finds it?

And when she does find it, she calls together her friends and neighbors and says to them, “Rejoice with me because I have found the coin that I lost.”

In just the same way, I tell you, there will be rejoicing among the angels of God over one sinner who repents.”

Occasionally, the parables Jesus use fall a little flat to our modern ears. Of course, that does not render them irrelevant, but sheds light on our own shortcomings.

When discussing the faithfulness of God, the Catechism of the Catholic Church states in paragraph 211:

The divine name, “I Am” or “He Is”, expresses God’s faithfulness: despite the faithlessness of men’s sin and the punishment it deserves, he keeps “steadfast love for thousands“. By going so far as to give up his own Son for us, God reveals that he is “rich in mercy”. By giving his life to free us from sin, Jesus reveals that he himself bears the divine name: “When you have lifted up the Son of man, then you will realize that ‘I AM’.” (emphasis mine)

I had to finally admit to myself that I would not probably care that much about one sheep out of a hundred who ends up straying from the group and getting lost. Would I leave the sheep and go off into the wilderness in search of that missing one? With most of the group intact and numbers practically the same, it’s hard for me to imagine going out of my way for one sheep.

Probably there are loads of cultural considerations of which I do not have any grasp. My livelihood does not depend on sheep. Likewise, when I think about the coins of this one woman, I probably would sweep my house looking for a coin if it were valuable to me (it’s hard to imagine that in this day and age; I suppose I should liken it to a large paper bill) but would I call my friends and rejoice with them? Nah. (Okay, maybe a Facebook status update.)

Rejoicing now in my own inability to completely relate to these two parables, I am left with a stark and heightened awareness of the difference between my fidelity and Jesus’ fidelity.

I should be on my knees thanking God that His attitude toward me is not like my own toward that one stray sheep. Jesus would go find me. He would pick me up and sling me over His shoulders.

Not only that, He rejoices with His friends in heaven, the saints. The parables are a beautiful illustration of His fidelity, or faithfulness, this very gift He seeks to impart to us as one of the fruits of the Holy Spirit.

What are the ways in which we overlook our lost brothers and sisters, the ones who have fallen away from the faith, or who have never found Him to begin with? How about the ones who are struggling in the midst of challenges, existential crises, emotional turmoil leading to a tepidity of faith, or distrust in God? Jesus is looking for them. Are we? Are we so faithful that we will drop what we are doing to go tend to that one sheep, look for that lost coin? Do we sincerely rejoice when our brothers and sisters get found, find solace, healing, renewed faith?

Equally as important, do we maintain hope and continue to lift up our suffering brothers and sisters in prayer? It is easy to throw up our arms and assume the sheep is lost—the wolves have eaten him. What’s the point? we think. Why risk our own lives, our own comfort, our own security?

Let us pray for fidelity during this Year of Faith.

One Reply to “Come Holy Spirit, Give Us Fidelity”