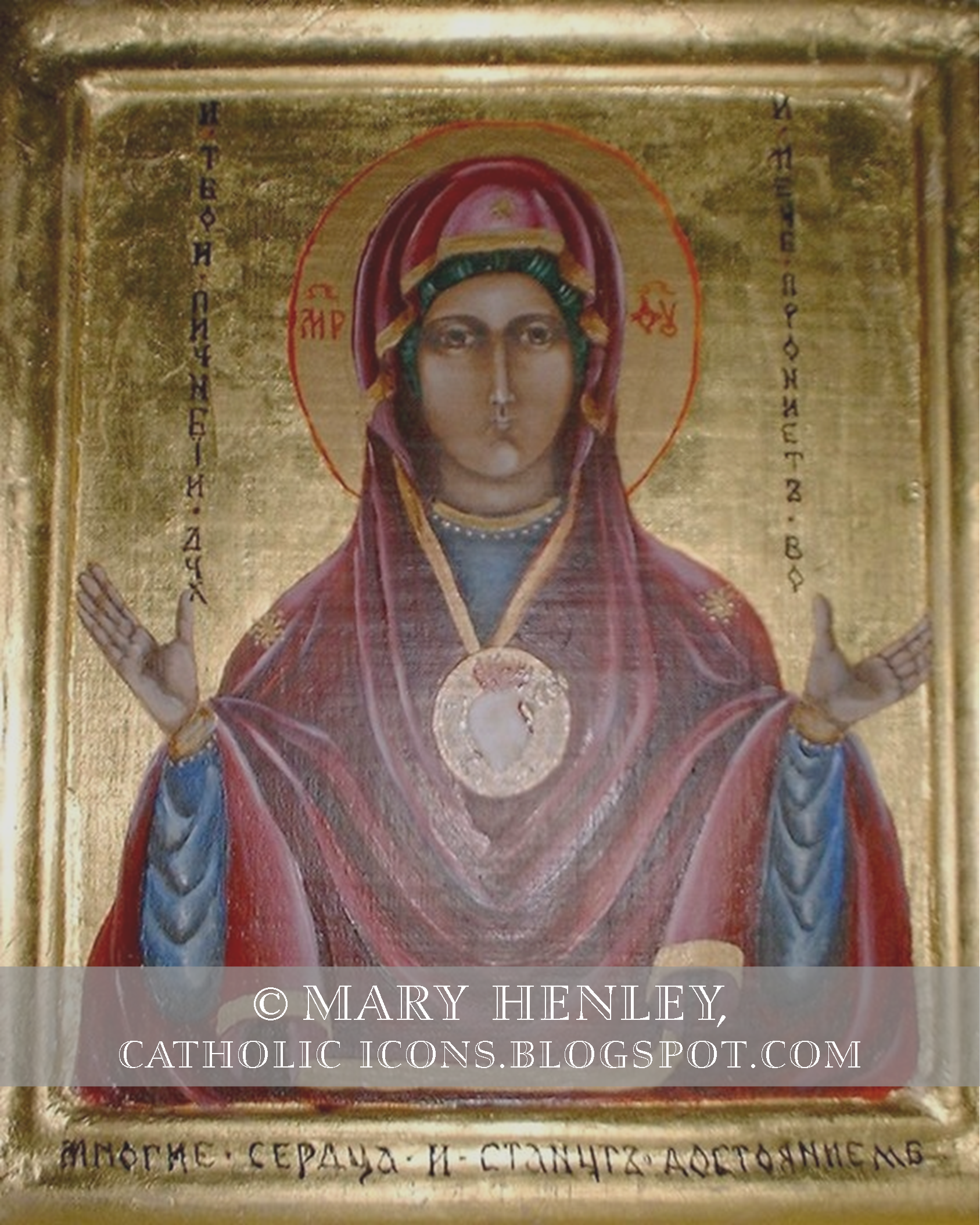 If we are temples of the Holy Ghost; if we are made members of the Body of

Christ at our Baptism; if the Body of Christ is our Holy Mother the Church; how much more so then is Mary both our personal model as believers, and the model of the Church?

Mary our mother had the fullness of God become incarnate of her flesh, and dwell within her for nine months. She swaddled, and suckled, and raised, and dwelt with the Most High for the first thirty years of His Life. Sadly, she was uniquely joined to His Sacrifice by the piercing of her own heart, foretold by the prophecy of Simeon. Lastly, she was given to us as our Mother by Our Lord Himself, on the Cross, for as John was the beloved, so too are we the beloved of the Lord. Mary is truly our Mother, and Mother of the Church: Militant, Suffering and Triumphant.

Because of this total giving of herself, Mary is our model of faith. With perfection, by the grace of God, she is the complete, total, unreserved giving of herself, for the sake of our God. The entire purpose of her being is to bring forth the Messiah into the world, and that purpose has never changed. She is the Magnificat; she only serves to magnify the Lord, and draw souls closer to her Son. As Christ is the Light of the World, Mary is a lens, which only amplifies our focus and devotion to the Divine Light of Christ.

I have heard of many believers, even Catholics, who shun affection and devotion to our Mother. Still more I have heard believers rebuff Mary’s devotional titles of Mediatrix of All Graces and Co-redemptrix. I believe this rebuff comes from ignorance, because calling on our Mother by those titles only amplifies Our Lord, and glorifies His already infinite glory. In giving her fiat to Gabriel, and sacrificing her life as a life of sorrow united to the Cross of Christ, Mary acted as that vessel through which God became man. That is why she is Mediatrix of all graces, not because she Mediator, for Christ alone is Mediator, but because she is the means God chose, in the fullness of time, to make Himself present in time, and in the world. She continues this role today in our devotion to her, which is used solely to amplify her Son, and draw souls ever closer to Him by His Grace. Is Mary the Redemptrix? Heaven’s no. She is Co-redemptrix because: she cooperated completely, totally, and without reserve, with the Will of God and the Redemption of man in Christ her Son; she was united to His Sacrifice her entire life by the prophecy of Simeon, so truly was her life a life of sorrows, even in the overwhelming joy of living with God made man, here on earth; and Mary our mother continues her purpose of existence in drawing souls ever closer to her Son, so that they may enjoy the fullness of His Redemption in Heaven. Truly Mary is Co-redemptrix because she alone, in a unique way, by the superabundant grace of God, cooperated in His Redemptive Life, and Act upon the Cross.

Tomorrow is the Feast of the Seven Dolors (Sorrows) of Mary. If you can, go to Mass, but no matter where you are, think of the Seven Sorrows of Mary and offer a Hail Mary for each sorrow, in thanks to her sacrifice of self, for the sake of her Son, and Savior.

The Seven Sorrows of Mary, our Mother:

1. The Prophecy of Simeon.
Reflect on the sorrow of Our Blessed Lady, when She presented Her Divine Child in the temple and heard from the aged Simeon that a sword of grief should pierce Her soul.

2. The Flight into Egypt.
Reflect on Her sorrow when, to escape the cruelty of King Herod, She was forced to fly into Egypt with St. Joseph and Her beloved Child, and pray for those who kill the children today by abortion.

3. The Loss of the Child Jesus in the Temple.
Reflect on Her grief when, in returning from Jerusalem, She found that She had lost Her dear Jesus, Whom She sought sorrowing for three days.

4. The Meeting of Jesus and Mary on the Way of the Cross.
Reflect on Her meeting Her Divine Son, all bruised and bleeding, carrying His Cross to Calvary, and seeing Him fall under its heavy weight.

5. The Crucifixion.
Reflect on Her standing by, when Her Divine Son was lifted up on the Cross and the blood flowed in streams from His Sacred Wounds.

7. The Burial of Jesus.
Reflect on Her following His Sacred Body as it was borne by Joseph of Arimathea and Nicodemus to the sepulcher.

After meditating on the Seven Sorrows of Mary, recite three Hail Mary’s in honor of Our Blessed Lady’s tears.  Mary our Mother, Mary Mother of Sorrows, pray for us.

Reflections where found at: PrayerBook Devotions

One Reply to “The Seven Sorrows of Mary, our Mother”