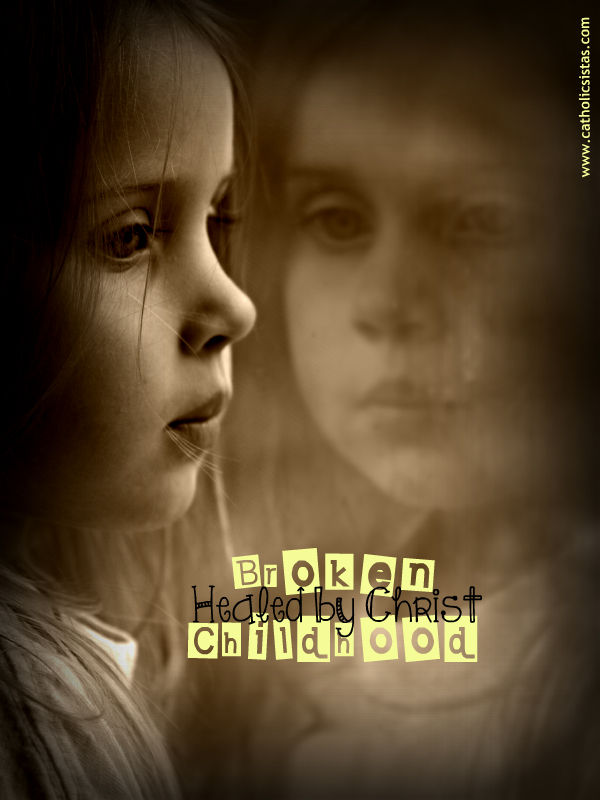 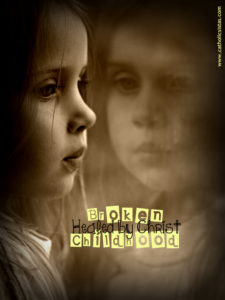 Rushing to my pew, quietly and quickly, I tried to go unnoticed. A shy college student, I had no one to really go to Mass with me – well, not as often as I wanted to go, which was daily. Pulling the kneeler down, I felt my knees hit the leather chocolate brown cushion, folded my hands in prayer and closed my eyes in adoration. Just a few minutes later, I heard little feet scuffling the tile floor of the center aisle; I didn’t have to open my eyes because I knew it was the Sanchez mother and her nine little ones. In admiration, as I heard the last set of feet pass my pew, I opened my eyes to catch a glimpse of this lovely family which stood out like a sore thumb at our parish of over 500 families because of the size of theirs. It took two vehicles to get to Mass for them at the time, but you could count on them to be there almost on a daily basis. Their father was the Deacon at our parish, a sweet quiet man always quick to offer a smile and who also was a doctor. Teresa, their three year old, would look around the church and have a staring contest with the beautiful images of Mary and the saints frequently until her eyes met mine and we would share a quick smile and a little wave. Though their family was a little bigger than the Martin’s, they reminded me so much of what Saint Therese of Lisieux’s family must have been like while she was growing up. I admired this family and frequently thought to myself, “oh how I wish one day I too could have a family like that, but that probably won’t ever happen.”

Quickly negative thoughts would enter my mind as I closed my eyes again because I was still so very broken. I couldn’t understand why I was so broken at the time. I wanted to blame everyone else; after all, it was easier that way. It wasn’t my fault I lost my father to war and that he chose the military as his profession. It wasn’t my fault that my mother became a widow at twenty-five with three young girls ages five, three, and one and an immigrant to the United States of America. It wasn’t my fault she had to work two and three jobs at a time just to keep the water running and electricity on while my grandmother raised us. It wasn’t my fault she got involved with a man that was a child-molester and targeted all three of us as well as one of my cousins. It wasn’t my fault she became an alcoholic. It wasn’t my fault that uncles and male cousins thought I was “a pretty little girl” like my step-father. It wasn’t my fault we had to move around so much growing up – sometimes even going to two or three different schools in one year. It wasn’t my fault that we ended up in an apartment building in a not-so-great section of South Florida where gangs were popular. It wasn’t my fault I thought sleeping with my boyfriends from a very young age was the proper way to show affection; after all, wasn’t that the way I was taught by the only man in my life, my step-father? These thoughts ran through my head almost daily and I used them to continue to justify my actions even when God was showing me His love and mercy. After all, he had used one of these boyfriends to “bring me back home” and back to Church. That didn’t stop my broken nature though. I prayed and worked at a Church as a Youth Minister because I loved my Faith and my God but I didn’t really realize that my personal life was a wreck! So looking at what this beautiful family had, a lovely marriage, lots of little children, a happy Catholic life, that wasn’t for me. It would never happen, “stop dreaming”, I would tell myself frequently.

Of course, running a life pretending to be a good Catholic wasn’t working out. My hidden nature, the outcome of child sexual abuse would soon catch up to me. Soon after my graduation from the university I found out I was expecting a baby, the father didn’t want me to keep “it” and I decided I would raise the baby alone. This lasted about three weeks and his father, a man that had serious problems with commitment, decided we should go ahead and get married. We did, when I was five months pregnant; we had a big Church wedding, I bought the dress that concealed the baby bump and it was a beautiful day! That is, until reality hit. This man too was broken, but a different kind of broken – his childhood also tarred with abuse physical and alcohol. After four years of being the victim and trying to raise a child in this environment, I went to see my spiritual director and after failed attempts to save the “marriage,” I filed for a civil divorce and began my annulment process. Oh those were 2.5 years that felt like a century, between the pain of reliving my life for the application and realizing the vast signs and errors in both our ways {we really were two broken people that had no business being in a relationship to start with}.

During this time was when my life changed completely. I went on retreats often and to Confession frequently and since I couldn’t receive Communion, I went back to Adoration for hours on thinking and analyzing my life, realizing that really none of that was my fault, after all I was a child. But I had to make drastic changes in my life; I was now a mother and needed to work hard to raise a Godly young man. There I was again, my knees on that kneeler begging God to save me, “one more time!” Shortly after all this and living a now chaste single life with a child of three years old, I began a Novena to the Holy Ghost. In my heart of hearts I still dreamed of a family like the Deacon’s and his lovely wife, but I never thought that would happen; yet, God listens to our hearts. Since I was such the “Doubting Thomas,” I asked God for a specific kind of man {I even made a list, and among these were silly little things like being ambidextrous like my dad, a tall man, a man of a stronger Faith than mine}.

On the last day of the Novena, I met Peter (my now husband), and of all places, on what is now CatholicMatch.com. If I told you the details of my list and how precisely the description of Peter fit that list, you’d think I was crazy, lying or both. Peter had just finished discerning a vocation to the priesthood with the Fraternity of Saint Peter (an order of apostolic life which only offer the Mass in Latin}; he was a convert and knew so much about our beautiful Faith that ten years later I’m still amazed of how much he knows {versus me, the cradle Catholic who knows so little} and how perfect God’s plan in our lives is. This November it will be ten years since we met, courted, and later married in the Traditional Latin Mass.

Today my life mirrors that of the Sanchez Family more than any other family I’ve met; it amazes me that I never told anyone this nor did I ever ask for it, but the Lord listened to my heart. He heard that I needed His healing; my brokenness needed Him so much and through prayer and the Sacraments, here I am today, a better Catholic. I’m trying my very best to live a life of grace, a life of devotion and prayer as wife to the perfect man (for me) and mother to five little blessings. 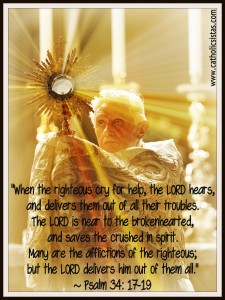 Daily, I struggle with my sinful nature partnered with the sad memories of my broken childhood. I can now look back and accept what happened because it made me who I am today, and it also helps me look at my present and future with hope – true hope in Him. My wonderful husband who is so wise constantly reminds me by telling me this: “In your spiritual life, you are never standing still. You are either moving forward or falling back.” I strive to always be moving forward, much more than I did before I was healed by Him, our Lord and Savior Jesus Christ. Without Him, I cannot do it; it is impossible. It’s not an easy road, not a perfect one either, but it’s a grace-filled one full of the love and forgiveness and healing power of God. So my sisters, yes, there is hope and a beautiful life, even when life fed you a broken childhood! Pray for me so that the Lord gives me strength to continue to heal and thirst for Him ever more.