From Agnostic Theist to Seminarian: Part 4

Catholic Sistas welcomes the fourth and final installment of seminarian Craig DeYoung’s beautiful conversion story. You can click on the following links to reach the first, second, and third parts of Craig’s story.

The last two months have been an incredible blessing. I had the opportunity, for the month of July, to make the 30-Day Exercises of St. Ignatius. The exercises were an incredible experience, during which I fell even more deeply in love with Jesus and He showed me how real His love truly is. He drew me deeper into the mystery of His desire for my heart, and called forth a greater self-gift.

It seems fitting to me that Jesus should draw out my desire to love in such a graced way during my final preparations for ordination. He has done so in a way that rekindles in me the incredible joy that first helped me to recognized God’s call to seminary.

In Part 3 of my conversion story, I spoke about the love that brought me to the Church. The love I saw present in Catholics who lived their faith with an authentic desire to be always with Christ drew me in and stirred up the desire in my own heart to have that same love live in me. It was love that brought me to Christ’s Church; it was the joy of living out that love that called me into the seminary.

Three months after becoming Catholic, I went to confession with Fr. Kurt Lanzrath, a Franciscan priest who came to St. Mary’s frequently. A priest of 50-plus years and more than 80 years old, Fr. Kurt overflowed with joy. He was hardly ever seen without a tremendous smile on his lips and a playful gleam in his eye. He would swing his cane over his head with a laugh and almost fall over trying to stay on his feet.

One Monday, while I was in the confessional with him, the thought struck me, “If I could be as happy as this man, I could see myself becoming a priest.” It was his joy that called to me and I began to realize that the most joyful people I knew were priests… 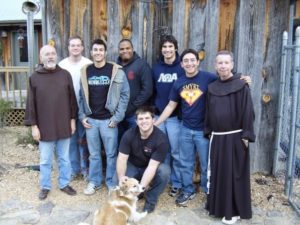 Me, kneeling in front, during Seminary Sprint.

At first, the thought seemed a passing fancy, but I indulged it and began to attend discernment dinners at the rectory with other college-aged men. At some point, the possibility came up to attend a discernment event called Seminary Sprint. Seminary Sprint is an event put on by the Diocese of Austin that takes men discerning the priesthood and religious life to visit various seminaries and orders. I saw it as an opportunity to put my thoughts of the priesthood to their final rest.

We visited diocesan seminaries, a Dominican friar, a Cistercian monastery, a Carmelite monastery, a Trappist monastery, a hermit, a Benedictine monastery, and a Jesuit. It was a lot to take in, but it began my discernment and gave me what I needed to consider the call seriously.

I realized then that I wanted NOT to be called to the priestly life. I wanted to check it out, to say I’d considered it, but that in the end it was not for me. What happened over the next three years, however, made me identify readily with the prophet Jeremiah when he writes, “You duped me, O Lord, and I allowed myself to be duped.” For the Lord had planted the seed deep and began growing it in me.

I kept meeting joyful priests: Fr. Keith Koehl, Fr. Brian McMaster, Msgr. Mike Sis, and Fr. Italo Dell’Oro. The Lord was rather subtle, I think, so as not to scare me off, but eagle-clear hindsight has allowed me to recognize His handiwork. After two years of discernment, I decided not to worry about seminary, and began to pursue dating and a career. The dating didn’t work out, but work prospects seemed to line up perfectly.

During college, I majored in Industrial Distribution and I did well in my classes. The summer before my final year of studies, I interned with Siemens Energy and Automation in Houston. At the end of the summer, they offered me a job in their management training program for when I graduated. I accepted with great enthusiasm, knowing the position would require me to move four times in two years.

Soon, however, I realized I was unsatisfied. Something nagged at me, saying, “You need to stay in Texas.” I didn’t understand what it meant, but finally began looking for a more local job. I quit before ever starting with Siemens, which was a very sickening experience. I quickly found another job with Womack Machine Supply and thought I was ready to go to work.

But then Easter came.

After Easter Mass, I was at a friend’s house with 10 other people. Among them was Fr. Brian McMaster (associate pastor at the student center), Fr. James Ekeocha (then a transitional deacon), Marcel (one of the campus ministers), and two other college-aged men. A conversation began on the back porch, where Marcel asked Fr. Brian which of the young men he thought would someday be a priest. Fr. Brian cryptically said he thought one of us would be, but refused to say which one. This got me thinking seriously about the priesthood again, though to my great amusement, it later came out he was not thinking of me. (Aside: He is now my vocation director, a.k.a. my boss.)

Soon after this, the Virginia Tech shootings occurred. The event struck me deeply and I went up late one night to pray in the Church. Deep in prayer, I was overcome with a sense of the sin in the world, the sin of what happened in the Church during the sexual abuse scandals, and my own personal sin. I felt a great remorse and sadness, but immediately began to feel a warming joy for what Christ offered in the sacraments of the Church for healing and forgiveness. In this joy, I was filled with gratitude, and had the strong desire to give my life to share with others what I received in the Church, especially the Eucharist and Reconciliation.

After talking with Fr. Brian, I contacted the vocations director at the time, Msgr. Mike Sis. We met and talked for a long time. At the end of the talk, he said he considered me a good candidate for seminary. That same week I presented my final project in class to Womack Machine Supply, then informed the company I would not be joining them after all.

I was a messy mix of emotions. Anxiety, guilt, fear, excitement, joy, and probably some mix of every emotion a person can feel. The summer was anxious and midway through, I received my acceptance as a seminarian for the Diocese of Austin.

For five years now, I have been in seminary and I will, God willing, soon be ordained. It has been an amazing pilgrimage, which has strengthened me in faith, hope, and love by the gift pure grace. Jesus has accompanied me and become my best friend and beloved. But that is a story for another time.

My final word is this: It is love and joy that make me want to be a priest of Jesus Christ.

« Finding My Path to HolinessThe Seven Sorrows of Mary, our Mother »