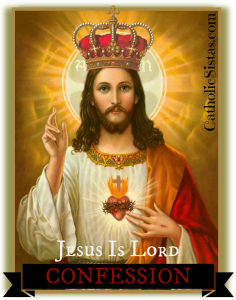 Welcome to the Jesus Is Lord series! This week the class met in the main church to receive the graces from confession.

If this is your first time visiting this series, I encourage you to take a few moments and read through the series introduction that will give a clear picture of the purpose and content of the Jesus Is Lord course. The introduction post not only outlines the course, but goes over the motivation to share in this class on the internet.

Check back next week for the fifth installment which will cover Holy Spirit – Going from the Seat to the Feet.

Day 1: The decision to choose God as the One to whom we will belong to for the rest of our lives, sooner or later has to be made by all of us. It is a very serious decision. You can say that it is a matter of life or death.

“I am now giving you the choice between life and death, between God’s blessing and God’s curse, and I call heaven and earth to witness the choice you make. Choose life, Love the Lord your God, obey Him and be faithful to Him,…” Deut. 30:19-20a

Day 2: Sometimes we can fool ourselves into thinking that we have already chosen the Lord. The Lord would have us realize that when we do our own will we actually say no to Him.

“Not everyone who calls me Lord, Lord will enter the Kingdom of heaven, but only those who do what my Father in heaven wants them to do” Mt. 7:21

Day 3: Sometimes what happens is that we reject the Lord with our silence. We live our lives in a way that people can’t notice that we belong to the Lord and we never declare publicly that we do indeed belong to Him.

Day 4: The lukewarmness of our indecision is something that is disgusting to the Lord.

“I know what you have done; I know that you are neither cold nor hot. How I wish you were either one or the other! But because you are both lukewarm, neither hot nor cold, I am going to spit you out of my mouth!” Revelation 3:15

Day 5: When our time comes the Lord calls us to make our decision and our part is to respond either with a yes or a no. Saint Matthew was busy working when he received his call. It was rather sudden, but notice his response.

“Jesus left that place, and as He walked along, He saw a tax collector named Matthew, sitting in his office. He said to him, follow me. Matthew got up and followed Him.” Mt 9:9

Day 6: Once those who considered themselves God’s people were behaving in a way that wasn’t clear that they belonged to God {lukewarm} and Joshua pressured them into making a decision. This is what happened:

“If you are not willing to serve Him, decide today whom you will serve, the gods your ancestors worshipped in Mesopotamia or the gods of the Amorites, in whose land you are now living. As for my family and me, we will serve the Lord.” Joshua 24:15

Day 7: What the Lord is calling you to do is open the door of your heart and let Him in to be the Lord of your life. If you can go beyond your feelings of embarrassment and pride and openly declare that you belong to Him, He promises you a special place beside Him in heaven forever.

“Listen! I stand at the door and knock; if anyone hears my voice and opens the door, I will come into his house and eat with him, and he will eat with Me. To those who win the victory I will give the right to sit beside Me on My throne, just as I have been victorious and now sit by My Father on His throne.” Revelation 3:20-21

« How Do You Heal a Broken Heart?Thirty Ways to Love Your Mother »