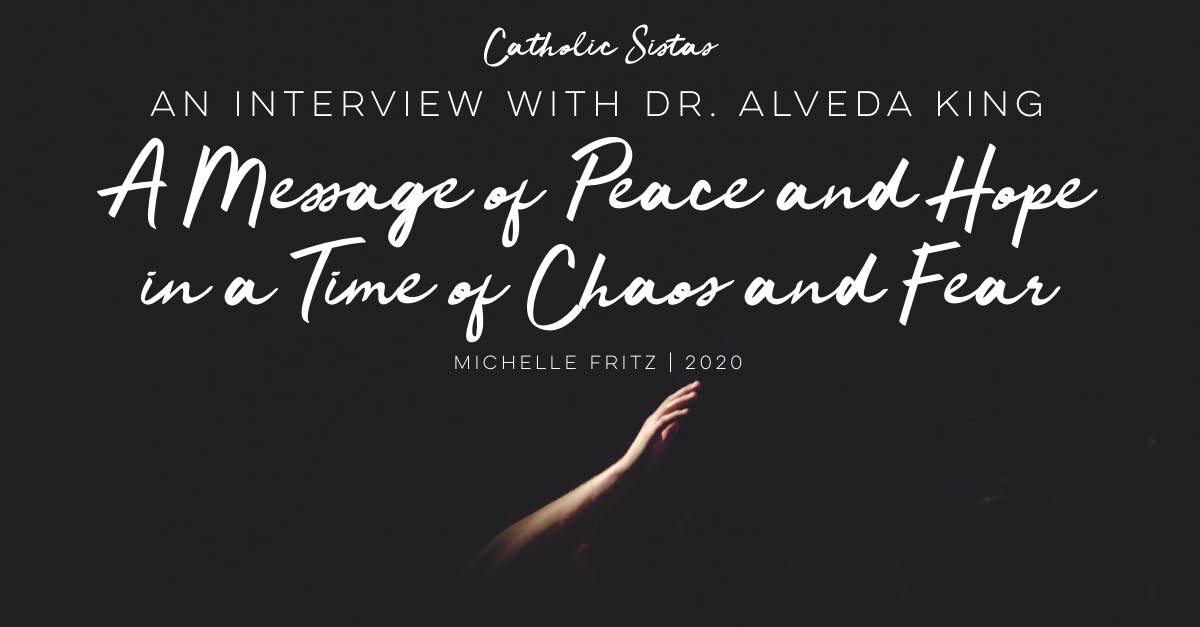 One only has to turn on her television set, listen to the radio, peruse social media, or even step outside her front door to be witness to the winds of change sweeping through the nation. Of course, with that wind we have also seen chaos and upheaval grip much of our nation as well. Following the murder of George Floyd in Minneapolis, many have taken the opportunity to speak out against the inequality faced by people of color in our nation. And while this is a wonderful thing to do, others have used this platform to preach change through any means available, including violence. As Christians, what are we supposed to do? How are we supposed to react? How can we help implement change and civil discourse and yet dissuade those using violence?

I was blessed to speak with pro-life leader and civil rights activist Dr. Alveda King, niece of the great Dr. Martin Luther King Jr. In a candid interview, we discussed the state of our country as well as what we, as Christians, can do to help our nation move forward.  In the eyes of many, the two of us are vastly different- she is an African American from a well-known family, engaged in activism since she was born. She served in the Georgia House of Representatives and has written numerous books. She is well-known, often giving interviews for news stations and other media. She has faced challenges that I will never face. She has lived a life that I cannot imagine.

I, on the other hand, am a white woman who was born after the civil rights movement and grew up never truly knowing what it was like not to love everyone I met. Schools were not segregated, I had friends of every color and nationality, and I was never taught to hate those who are different from me. I am married to a police officer, who was raised the same, and together we have raised our children to also love everyone they meet. I am a homemaker and homeschooling parent. I practice what I preach and volunteer in many ways to help our community thrive and uplift those who need to be uplifted. I am currently the youth minister at my parish and I would venture to say my name is not known outside of my own little world. We have faced intense hate because of my husband’s chosen profession and for our faith, but our experiences are not the same.

In most people eyes, we are more different than alike… but as Dr. King points out, speaking sister to sister, we aren’t different, we are the same and this is the message we all need to hear but that we often fail to hear.

Beginning a Conversation of Peace

Opening our conversation, I asked Dr. King about her feelings regarding George Floyd, the police, the protests, and ultimately the riots. She began, “We are having this conversation in June of 2020. This particular year there is a new election, we will be reelecting our president I believe and some others will be elected; Covid 19 has just rocked America and the world. This is not new… elections are not new, pandemics are not new; and neither is the violence we are experiencing from the death of George Floyd- a man who was killed from a knee on his neck-of course him being African American and the officer being Caucasian.” Expanding on the public’s vastly different reactions to officer involved arrests by white officers versus black officers, she continued, “So we’re down to the argument of skin color, over and over again. That has happened throughout creation since the fall of humanity. People fight about skin color, class, who’s rich, who’s poor, who’s young, who’s old, and all types of things. The answer, the cure, of course, is always- come to the Lord and seek the Lord. And treat each other, regardless of skin color and socioeconomic conditions- treat each other as humans…”

This is where we most often fail. We only see a black man or a white officer. We fail to see that God has created us each in His image and likeness. We fail to see the inherent dignity in one another. Instead, we focus on skin color, wealth, social standing, age, and a myriad of other qualifiers that don’t necessary qualify but instead divide. And we are all guilty of this regardless of our color, status, pocketbook, etc. As humans, because we are sinful, because have experienced the fall, it is difficult for us to see each other through God’s eyes.

Dr. King quoted Acts 17:26, “He made from one the whole human race to dwell on the entire surface of the earth, and He fixed the ordered seasons and the boundaries of their region” several times throughout our conversation. She lamented, “I was taught by my father, Reverend A.D. King, my mother Naomi King who is still living, my granddaddy Daddy King, Mama King his wife, and my uncle Dr. Martin Luther King, Jr. that Acts 17:26 “of one blood” means that we have to get along. Martin Luther King Jr said we must learn to live together as brothers and sisters or perish together as fools. We’re not separate races.” She continued, “God created all people…. Our blood is red, our skin color- we can see it. We have to see it or we are colorblind.  It’s a sin to differentiate people by skin color or money or any of the human conditions that we have. The human race has been in the condition of being a fallen group of people in a fallen world. The answer to that is always Jesus Christ. So sin is sin. It is a sin to see our brothers and sisters as other races when we are all of one race- the human race. It is sin to say “my race needs to get along with your race” because there is one race. So, the issue of racism, socially engineered to divide us, is sinful.”

Unfortunately there are those who do not wish to see the world as one race. They hope to keep us separated. How are we to react then to those who wish to keep dividing us? Dr. King, like Martin Luther King Jr and her own father A.D. King, advocates peace. Communication is the key- truly listening to one another and then actively working with one another. But what about those who say that no one is listening and so violence is the only thing that will open the government’s and people’s eyes? When asked about the response of some justifying rioting and other violence she said that people are taking MLK Jr’s quote about “rioting is the language of the unheard” out of context. She states, “Martin Luther King Jr, in that same speech when he was speaking on riots and violence, went on to say that all violence is immoral and doesn’t make sense… we need to be heard, but not with violence. We have to quickly continue to say “we hear you” and now that we hear you, let us communicate in a peaceful, sensible manner. And so we have to NOT be violent and but to work together and learn to live together as brothers and sisters and not perish together as fools- because John 3:16 “for God so love the world…” God’s not colorblind, God’s colors are magnificent!”

Peace is the key. But how do we teach peace? How do our religious communities take the lead? Dr. King emphatically states, “The leaders of all faiths who acknowledge that there is a God in heaven, need to come together to teach people not to be fearful and tearful and to not panic, but to have faith to pray… to pray instead of panic and to have faith instead of fear. And as leaders do that, (and every person is the leader of him or herself and if he’s not, he’s in serious bondage)- leaders of your homes, your churches, your communities, your work, our governments- all leaders should be encouraging and not stirring up fear.”

Don’t incite fear. Don’t encourage violence. Don’t panic. Instead, pray, have faith, work alongside one another to bring about true change. Encourage one another. Simple but powerful lessons for us all.

As a mother and a youth minister I was particularly interested in what we can do to help raise the next generation to avoid the mistakes of the past and to repair the damage that the past has inflicted. Dr. King spoke eloquently when she said, “Remind these young people of their purpose and their destiny- that they have a voice and their voice comes from God; they have breath that comes from God. And even though George Floyd’s voice had been taken from him, they still have their voices and can raise them for good and unity. We have to teach our young people about God- not to fear, not to panic, but to love and to communicate, to talk… use our breath that God gives us to speak truth.”

This, of course, is not just a message for the white community, but instead for all of us. If we are truly one human race then we must all reach out to one another speaking the words of truth in love… without fear, without panic, but instead with Christ guiding our words and actions.

As Dr. King and I ended our conversation, I asked her if she could relay one last message to the people reading, a message that she believes God wants all of us to hear, what would it be? She responded with so much love when she said, “The Lord has said in the book of Luke, “The Spirit of the Lord is upon me to set the captives free”- the little babies in the womb are captives, people in jail unjustly are captive, God wants this to be a time of repentance and to understand that we are all of one human race. We need to come back to God and God will help us solve these issues together.”  With God’s help, we can be the instruments to set the captives free.

What has happened to George Floyd is unquestionably wrong and horrifying. For any person to be treated as he was can’t be justified. It has shaken us all to our core. It has been a catalyst for change (and thankfully so!).  But as Dr. King agreed, this isn’t just a police officer problem; this isn’t just a black vs white problem; this isn’t just an American problem… this is a worldwide problem. It is a problem with sin. It is a problem with the condition of our hearts. Conquer sin and we will conquer racism and every other ailment of the heart and soul. But we cannot do this without God and we cannot do this without one another.

If you would like to visit Dr. Alveda King at her website you can find it here. Additionally, she works with Priests for Life as their Executive Director of their Civil Rights for the Unborn outreach program.