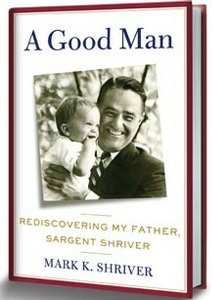 I was recently given the opportunity to do a book review. Within hours of agreeing the book, A Good Man by Mark K Shriver, showed up on my doorstep.

A biography of Sargent Shriver – the man who created the Peace Corps – is first and foremost a love story told by one of his sons. It focuses on the love he shared with his father, the love between his parents and his father’s love affair with God.

When reading, you can see the aspects of his Faith in his life. Sargent Shriver did what he did out of Faith, Hope and Love. In 1968 at the Winter Convocation at Wilberforce University he said “Without love, which really is respect for your fellow man, there can be no faith in ourselves, or in others. Without faith, there can be no hope; without hope, there’s no future…” A few years earlier at the 1963 National conference on Religion and Race: “Inspire us with the faith that God is above us and with us and that He will help us if we will do what is right. Stir our consciences. Strengthen our will. Inspire and challenge us to take our principles into the toughest walks of life and make them work.” He lived those words.

There are many things we as Catholics can take from Shriver’s life definite habits worth emulating. He took kindness to the top level. It didn’t matter if you were the Queen of England, his cab driver or a young child. If you were there with him you had his full attention and he was interested in you. We all need to look beyond the package and see Jesus in every person, every interaction we have.

He truly believed that service of others was the key to happiness, the key to peace. He created the Peace Corps to give privileged Americans the chance to serve in the poorest regions of the world knowing that that service would allow them to grow in kindness and understanding.

He believed that love was the answer. He loved with his whole being. He knew that love started at home and needed nourishment in order to flourish and grow. Given the stories Mark recounts about his parents it is obvious that love was the center of their home and it flowed into the way he remembers his dad. Shriver wrote regular notes to his children. No matter his other feelings at any time, pride, disappointment, he loved his children with an unconditional love that most of us only hope to emulate.

I believe that much of his strength and goodness came from his insistence on daily Mass. Mark recounts that no matter where they were in the world, one of the first questions his dad would ask when checking into the Hotel was “Do you have a Mass schedule?” Every morning, sometime between 7 and 9, he could be found at Mass somewhere. We receive such graces from every Mass we attend. They give us what we need to follow God’s will for our lives, to be a shining beacon of His love.

The latter part of the book focuses on Shriver’s fight with Alzheimer’s – a battle with an inevitable ending. He never became a combative angry man. He remained calm and kind even as the disease ate away at him. When we focus our lives on God we can only hope that we will have a similar end, that God’s goodness will be reflected all the days of our life.

Hannah is a cradle Catholic who happens to be most at home in the kitchen. She’s been married three years, but has only just started her job as a stay-at-home-wife and is investing her time in learning to sew and improving her housekeeping skills. She is the mother of two, Rita in Heaven and Edmund on Earth. She’s also an import to the States – originally from Canada – and she doesn’t miss the snow.