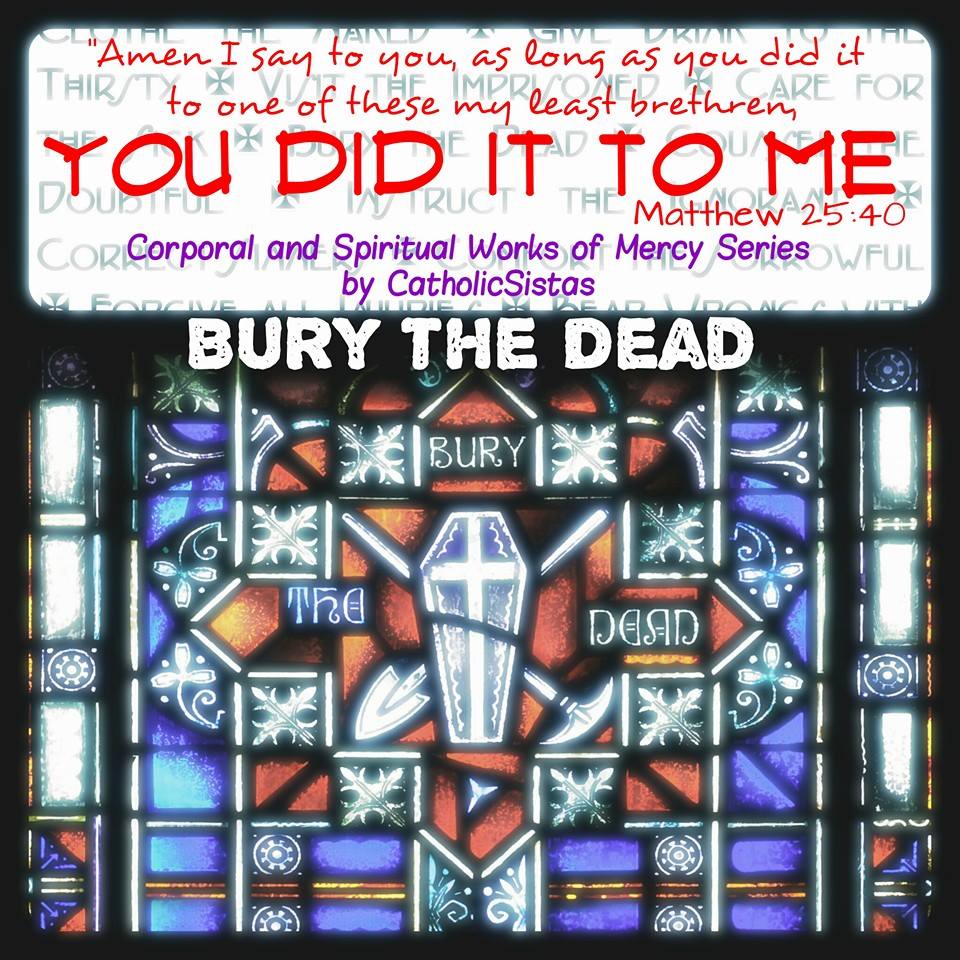 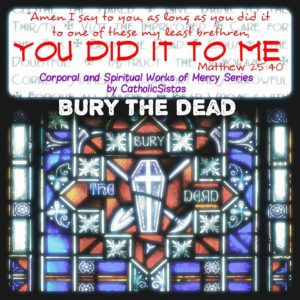 Think about the basic needs your body has. Food and water are basic needs to survive. We also need shelter and clothing. This is the very basics of what we as human needs. It makes sense that four of the Corporal Works of Mercy all have to do with providing these basic needs to those who lack them. Two others, visiting the sick and visiting the imprisoned, bring relief to a body that is under undue stress of one form or another. The last one seemed a bit out of place to me at first.

How is burial of the dead a corporal work of mercy? How does burial of the dead help the body in any way once the soul has left it? I believe that these questions came to my mind because I take it for granted that we do bury our dead. Essentially, I had just never thought about the why.

So why do we bury our dead? I’ve always taken it for granted that when a loved one dies there would be a funeral and the body would be buried properly. That’s the culture I have grown up in and I imagine most of us have similar expectations.

In contemplating this work of mercy it occurred to me that to bury the dead also fits in with the Theology of the Body that was given to us by Pope St. John Paul the Great. The Catechism tells us, “The bodies of the dead must be treated with respect and charity, in faith and hope of the Resurrection. The burial of the dead is a corporal work of mercy; it honors the children of God, who are temples of the Holy Spirit” (CCC 2300).

Respect for the body. The body as a temple of the Holy Spirit. It all fits perfectly with the Theology of the Body. Our bodies are due the same respect and care in death as in life.

But what is really special about this? For most of us, this is pretty routine. We have funeral homes that care for the body, we have carefully crafted funeral rites to give honor to the person’s life, we participate in wakes, comforting the family members and bring them meals, helping with their needs during their time of mourning. Sometimes it’s hard for us to see the simple act of the burial as a work of mercy because it is commonplace in our first-world culture. But this isn’t the case in other parts of our world and it certainly was not the case in early Christianity.

Our Jewish brothers and sisters also have a deep respect for the body and have very careful laws and commandments on care for the dead and their burial. We see this in the Old Testament in Tobit 1:16-19, Sirach 38:16, and 2 Maccabees 12:39. In addition, some of the Jewish customs of burial are also detailed in the burial of Jesus (see Luke 23:50-56 as one example; for more on Jewish burial traditions, see Judaism 101). In many ways, as Christians, we inherited this respect for the body from our Jewish predecessors. So imagine the early Christians being martyred and their surviving relatives and friends wanting to bury them in the proper way.

Until I was doing my preparatory reading I hadn’t considered what actually happened to the bodies of the early martyrs or how they were able to receive a proper burial (when they did). Those who persecuted the Christians would have known that the survivors would want to bury the dead. In my imagination I can see the persecutors getting rid of the bodies in ways that would have horrified the early Christians, blaspheming the body or cremating it. The body could also have been left out like “bait” to capture other Christians who tried to retrieve the body for proper burial. It was dangerous work and Christians risked their own lives in an attempt to bury the martyrs. (Reference HERE.)

Looking at modern current events, I wonder about the Christians who are being persecuted for their faith in Syria, Iraq, other parts of the Middle East, and parts of Africa, plus in many other parts of the world. Are those that are killed able to be given proper burial? Back home here in the States, we have many dead who also do not receive proper burial. Aborted children are considered medical waste and are tossed out. The homeless who die on the streets, are their bodies treated with respect? In some places, maybe yes, but in others, maybe not.

All of this put together tells me one thing: we must care for the body in death with as much respect and consideration as we do in life. Thus, all persons deserve a proper burial: the elderly who die in bed, the soldier who dies in battle, the sick who dies of illness, the baby who dies in the womb.

My son, shed tears for one who is dead
with wailing and bitter lament;
As is only proper, prepare the body,
absent not yourself from his burial.
(Sirach 38:16)

N.B. For anyone who might want to jump on the mention of cremation a few paragraphs back in reference to persecutors of the early Christians cremating the bodies of martyrs. The pagans thought that cremation would make the resurrection of the body impossible, although we believe that God is not limited by such things. However, cremation was at one time banned, primarily as a way of combating the Gnostic heresy that all matter is evil. Currently, the Catechism of the Catholic Church states: “The Church permits cremation, provided that it does not demonstrate a denial of the faith in the resurrection of the body” (CCC 2301).

One Reply to “You Did it to Me: To Bury the Dead”