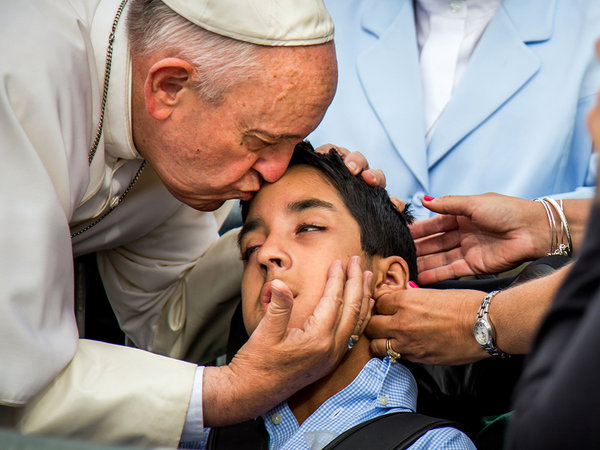 When I was about middle school age, I participated in a life chain with my mom. We lined up shoulder-to-shoulder with hundreds of other pro-life people along a busy stretch of road in my hometown. We held up pro-life signs and prayed.  I don’t remember much about the day, except where we were standing, and the fact that a lady drove by us and yelled out the window, “You’re the ones who are killing!” I don’t think I had any idea what she meant by that comment at the time, but I did understand that she was angry. Very angry. 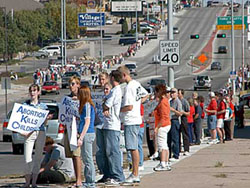 Most adamantly pro-choice people I encounter these days also seem very angry. Perhaps they are post-abortive. Perhaps they simply have bought into the lie that “pro-life” equals “anti-woman.” Perhaps a part of them senses the truth of the pro-life message and they lash out in defensiveness. Whatever their individual motives for that anger, I’ve come to identify one thing they all have in common – they don’t respond to reason. They don’t want to hear facts or logical arguments. They dodge hard questions and put up walls. Angry people just do not have ears to hear. The same is often true of the calm abortion advocates, too. They don’t have to be angry to be unreasonable. After all, sin darkens the intellect.

Even though I’ve seen this play out time and time again, starting way back when a stranger told middle school me that I was a murderer, I always fall into the same trap, making the same mistakes. I think that if I just make my argument clear enough, they will listen. Or maybe if I use the right combination of graphic words, their consciences will wake up. It’s difficult for me to walk away once I’ve engaged someone on a topic I’m passionate about, so I tend to stick around and continue the fruitless process of trying to reason with an unreasonable person. Maybe THIS post will finally be the one to get through, I think.  Or worse, I get angry, too, at which point the conversation is guaranteed to go nowhere but downhill.

Persuasive words and logical arguments are very important to the abortion battle, but sometimes those things fail. We need to make sure we have other tools in our arsenal.  Otherwise, how do we reach people who won’t listen to reason?  What can we use to put little cracks in their walls of defensiveness so that the light of reason and truth can shine through to them?

Some conversations I had regarding Pope Francis’ visit to the United States last week helped me to realize fully the answer to that question. Pope Francis chooses to spread the Gospel principally through displays of love and joy. Much to the dismay of many of us, he does not use as many pointed words as we might think are necessary. He does not often come out and say something as direct as “Abortion is evil, and here’s why…” But he always tries to be a witness to the love of God that is offered even to those who have committed grave sins such as procuring or supporting abortions, and especially to those who are targets of the Culture of Death. He joyfully embraces babies, the disabled, and the poor. He affirms for people that it is good that they exist.

Pro-choice people need to see pro-life people who are loving and joyful. They need to see us out with our kids being gentle and patient with them, not annoyed and frustrated. They need to see us reaching out to the poor, disabled, and imprisoned — the kind of people that they think would have been better off aborted. They need to be the recipients of our loving kindness even when we are in fierce disagreement with their viewpoint. There’s almost nothing that gets my blood boiling like someone who is defending abortion, but if I can’t treat that person as a valuable human being in our encounter because all I see is a position and not a person, then I am not witnessing effectively to the Gospel of Life.

A friend of mine, who is also a contributor to Catholic Sistas, has a precious daughter with hydrocephalus. She was strongly pressured to abort her baby when she was diagnosed in utero, and even lost friends over her decision not to do so. Her child, who doctors assumed would not live long and would only know misery in her life, is now a thriving four year old. She’s not exactly like a typical four year old, but she is a happy, sweet, smiling girl. My friend is constantly witnessing to the JOY of her daughter’s life, even amidst the suffering, and the JOY of mothering her. To me, this is a stronger pro-life message than using words to explain that disabled people have value too.

My friend shows that being pro-life is about more than words. When Pope Francis had his driver stop the car so he could get out and embrace a boy in a wheel chair, when he turned down lunch with important US politicians to eat lunch with the homeless, and when he went to minister to prisoners, he was demonstrating the same thing. That’s not to say that the words are not important – they very much are. We always have to be unequivocal in our objection to abortion and other violations of human dignity. And words often do change minds. But when people’s minds are closed, we have to aim for their hearts.

October is Respect Life month, which is concurrent with the fall 40 Days for Life campaign. Let’s spend this time not only proclaiming the Gospel of Life with our words, but also with our actions and our demeanor. When we are using words, we should remember that without love, we are only noisy gongs and clanging cymbals. And when we are foregoing words and trying to witness with compassionate outreach, we should remember that love is not love without Truth.

3 Replies to “The Joy of the Gospel of Life”