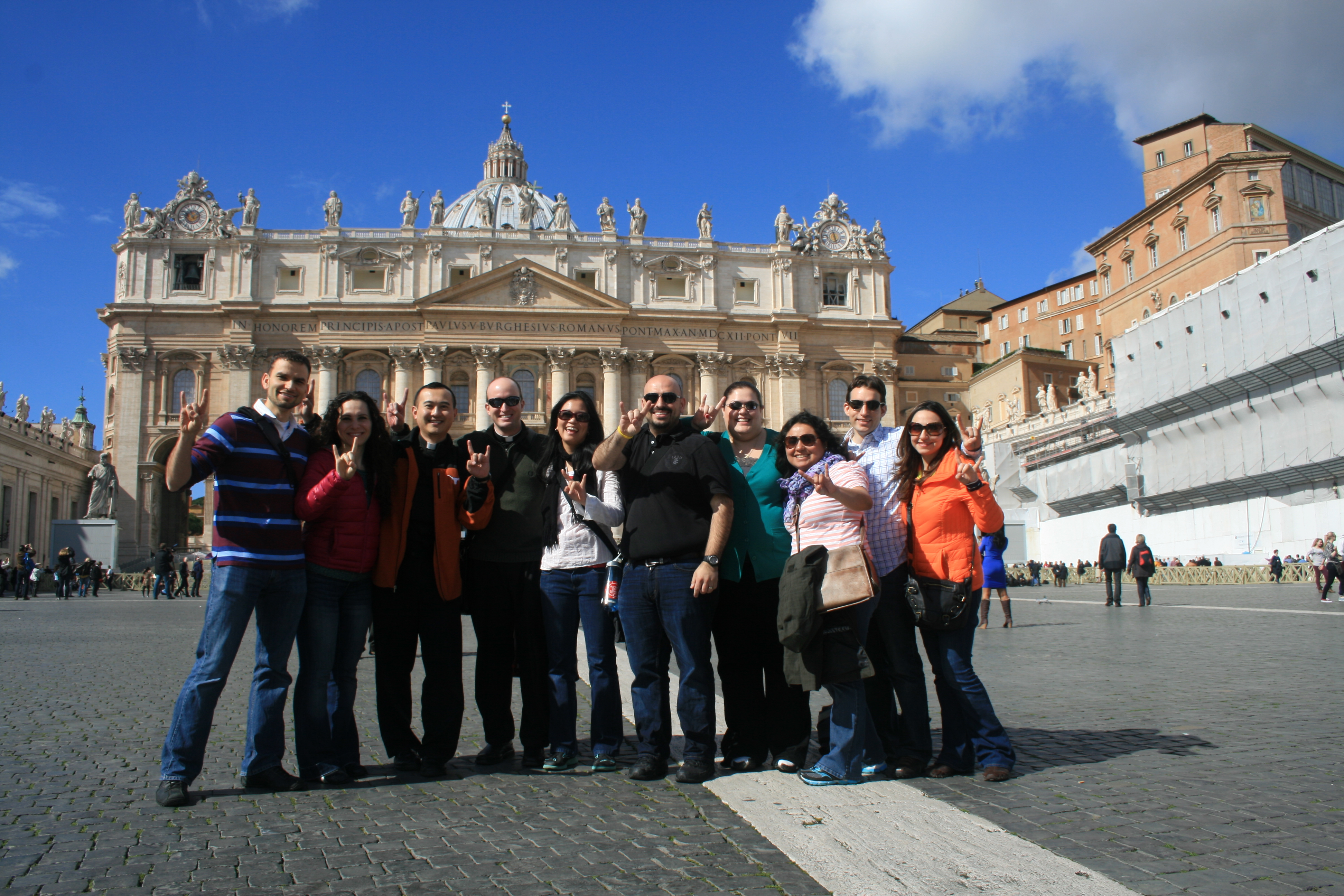 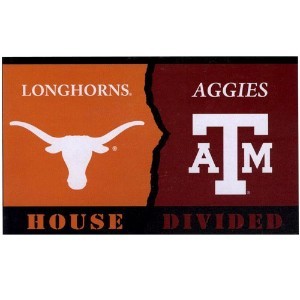 Have you wondered what it would have been like to be in St. Peter’s Square when the white smoke appeared? The electricity of it all? Seeing the black smoke turn to white and hearing the crowd erupt into cheers? It is my great pleasure to bring this mini-interview to you by someone I work closely with on my parish Pastoral Council, Ana-Cristina Gonzalez, Director of Stewardship and Development with St. William. The added bonus is that she graduated from the same most excellent university as I did – the University of Texas at Austin. Hook ‘Em!! While this small detail may not be of consequence to many, this is, in fact, a large deal at our parish considering our associate pastor, Father Jonathan, is also a Longhorn grad, while Father Dean is an Aggie, by proxy.

When I first heard Father Jonathan {and Ana-Cristina} were in Rome – my kids actually filled me in on that detail – I was chomping at the bit to hear the story. The whole story. First I heard bits and pieces from Father Jonathan after Mass, then I saw Ana-Cristina at our Welcome Sunday event and touched her arm to see if any Rome was still on her. No dice, but she told me a lot about what happened. Then I saw Father Jonathan and asked more questions. I knew this story needed to be told and asked them to share their experience. I hope you enjoy Ana-Cristina’s account of what happened and please feel free to ask her your own questions in the combox!

Q: Please briefly introduce yourself to our readers.

My name is Ana-Cristina and I’m the director of development at Saint William Catholic Church, a parishioner of Saint Mary Cathedral, and graduate of THE University of Texas at Austin and Gonzaga University. I’m also the aunt to the best niece in the whole wide world! The trip of the lifetime that you’ve asked me to reflect on all began in 2011 in Hallettsville, TX when a big group of friends from college gathered together go to Mass, catch up, and eat good food. God only knew what He had in store for us.

Q: Can you give back story on the trip? Were you there specifically for the conclave or was it a coincidence?

My friends and I had begun talking about taking a trip to Rome since late 2011. It was purely a coincidence (or God-incidence) that we were there. I can only speak for myself, but I was very upset when Pope Emeritus Benedict announced his resignation purely because of selfish reasons. I could not believe that I would be in Rome when we had no Pope!

Q: How long were you in Rome prior to the start of the conclave?

We left Austin, TX on March 4th and arrived in Rome on March 5th. We then traveled by train to Assisi where we spent two days exploring the beautiful churches and Basilicas. We then returned to Rome and spent the remainder of our time there. The conclave started the day we took a trip to the Amalfi Coast, so I missed the first vote that night but I was ok with it because I knew it’d be black smoke!

Q: Tell us about the atmosphere of St. Peter’s Square prior to and during the conclave.

Throughout our whole trip there was a definite buzz in the air. Assisi was pretty calm, as it’s known to be, but there was still a sense of excitement. Because our trip included two priests, Fr. Tommy and Fr. Jonathan, it was definitely a topic that came up with the locals. You could really feel the excitement in Rome…. activity in the square increased from day to day. Each day brought more media, more photographers, more people. This especially increased as the conclave began and wasn’t limited to the square.

Q: Where were you during the first and second smoke signals?

Our first full day in Rome we celebrated Mass at St. Peter’s at the Clementine Chapel. This chapel is very special because of the bones of St. Peter are literally behind the walls. This was also the day we went on the Scavi tour. We were directed to get to the tour by way of the Pope Paul VI hall. We literally watched Cardinals walking into the hall, being dropped off by car, surrounded by media as they were continuing their meetings and deciding when to begin the conclave. It was awesome being a witness to our church in action! We kept wondering if we were watching our future Pope walk by us. That day was also when the chimney was being installed. I was not present for the outcome of the first or second votes. During the first vote, I was just returning to Rome from a beautiful tour of the Amalfi coast. I had every intention to see the outcome of the second vote, but my friends and I got caught in a deep discussion about the future of the church. It was a great conversation, but by the time we realized what time it was, people were leaving the square after seeing black smoke.

Q: With your trip coming to a close and the anticipation of the third and final smoke signal before you left Rome, what went through your mind about the experience?

This is a really good question. I was telling one of my priest friends about my trip and he asked me, “Did you have a feeling that you would see white smoke?” I told him, “ Father, I am so stubborn that seeing black smoke didn’t even cross my mind.” There were some doubters in our group that it wouldn’t happen that night and that it would happen while we were in the air flying home, but that thought was so sad to me, I wouldn’t even let it in. I had rationalized the time line and it just made sense that it would happen the night before we left. This vote was so different than any other vote we would ever know because of Pope Benedict’s resignation. I thought it would have to be a shorter deliberation because of all the time the Cardinals had to prepare before the conclave began. White smoke for the third vote just.made.sense.

Q: Describe the third smoke signal experience. {i.e. white smoke, running to the Square, the sound of the bells, the announcement of Pope Francis, the electricity in the air, the weather}

My friends and I arrived to the square at 5 p.m. That day was so rainy and cold. It was miserable. About an hour and a half later, we were getting discouraged by the rain and long delay, so we decided to move towards one of the screens and I was going to sneak out to the restroom. We decided on a meeting place, and I rushed to a café. As I was walking back, the guards would not let me in the way I exited and were pointing me all the way back to the top of the square. I was nervous because there was no way I would find my friends if I had to go all the way around. It was at that moment that I heard the crowd gasp. Smoke was coming out! At first it looked black, and there were sighs of discouragement, but they quickly turned to loud cheers, when we realized the smoke was white. Then the bells began to ring, oh the beautiful bells, that let us know we had a pope. I was still outside the barriers at this point, but my guardian angel, in the form of a rebellious man, jumped the barricade and I followed. I found my friend Tina standing in front of the screen, tears streaming down her face smiling. Habemus Papam! Our other friend, Renato, found us and we began running toward the front of the square. We were near the front left side immediately in front of the statue of St. Peter. Our focus shifted from staring at the chimney, to staring at the balcony waiting for our new pope. The Swiss Guards marched out followed by two marching bands . Then we began to see curtains shuffle. The crowd cheered, but nothing. Lights began to turn on, still nothing. Then the curtains began to move more and the door opened. Cardinal Tauran announced what we had been waiting hours (and days) to hear, “Annuntio vobis gaudium magnum: Habemus Papam.” The crowd went crazy, but quieted quickly to hear the name. All we could catch was Bergoglio and the name Francesco. Standing nearby were a group of young Franciscan seminarians that immediately erupted into cheers and began jumping up and down chanting “Francesco! Francesco!” I began asking, “Is he Italian? That’s an Italian last name.” Someone nearby answered saying he was from South America and then another person said he was from Buenos Aires. I could hardly believe that the church now had its first pope from the Americas! A few moments later, Pope Francis walked onto the balcony. He stopped to look out at us for a while before he said anything. I’ve read many opinions on how he looked or why he did that, but it felt to me that he was taking it all in. I didn’t see fear, I didn’t see timidity; I saw a man (perhaps with a little shyness); I saw our shepherd looking at his flock. And then his first words, “Buona Sera.” The crowd erupted with cheers again. As he continued to speak, the crowd hung on his every word. I don’t speak Italian, but I speak Spanish, which helped me understand most of what he said. It was so powerful to hear such a big crowd praying together for Benedict XVI by reciting the Our Father, Hail Mary and Glory Be. Pope Francis talked about the journey of love and trust we are taking together with him. People would cheer sporadically during his speech, but when he asked for us to pray for him, silence immediately fell over the crowd. More than 100,000 people were in the square that day and it was one of the most intense, powerful, moments of prayer that I have ever experienced. Heads were bowed, hands were raised, and all were silent. Amazing doesn’t even begin to describe it! Pope Francis then bestowed his first papal blessing on all of those present, watching on television, and listening on the radio. In that moment, I began to grasp the idea of the universal church. We were connected, no matter if we were in St. Peter’s Square, at home 3,000 miles away, listening on the radio, or watching on television. We were all together in that moment receiving a blessing from our pope. We were miles apart, but connected in that moment. I felt renewed, hopeful and excited. We left St. Peter’s that night for the last time in complete and utter awe of what we had just witnessed and what we had been a part of during those 10 days. The 10 of us went out for our last meal in Rome and we celebrated our new shepherd. And we celebrated and gave thanks for the many blessings that God had bestowed upon us throughout our time in Italy. Viva il Papa!!

To read more about Ana-Cristina’s adventure, please check out her story in the Austin Diocese publication, Catholic Spirit.