From the moment I watched Pope Benedict leave the Vatican for the last time and speak for the last time as Pope, I had a feeling something big was about to happen. My opinions about popes has been a conversion in and of itself. Having been a Baptist most of my childhood, I had Protestant views of the papacy, but there was something about Pope John Paul II’s face that really made it hard to believe that he was the anti-Christ. As he grew older and suffered more and more I loved him and yet I still thought it was crazy that people would believe he was actually running the show. When he died I was one of those people who watched the conclave only in passing on the secular news outlets. 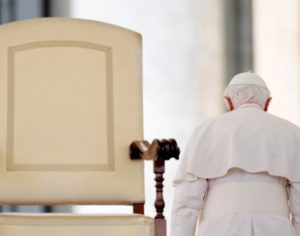 Then there was Pope Benedict. I did not think that I would ever really care for him. Like ever. But then I saw him in Rome. He won my heart. The thing about Pope Benedict is that in person he looks nothing like his pictures. In person the fact that he is an introvert is very clear. But what else is clear is that he is a kind and gentle soul. I don’t really know how to explain it, but from the moment I laid eyes on him, I loved him. I read his writings and loved him even more. I cried the whole time I watched him leave the Vatican. I long to see his face and to know what he is doing now. And I hope he knows how much we all love and miss him. I really do miss him.

And now Pope Francis. *sigh* What is there to say that hasn’t already been said in a million blog posts? He’s his own Pope. And I like it. My inner rebel is cheering him on, getting involved in liturgy wars that I have no clue about, talking when I shouldn’t, and making rash judgments against people I love and consider friends. (All of which, I just wrote a blog post about and I said not to do that. I need to take my own advice sometimes.) But all of that came to a screeching halt when I read the news that he will being celebrating Mass on Holy Thursday in a juvenile detention center. That was the beginning of my conversation with God today. He did not hold back either. 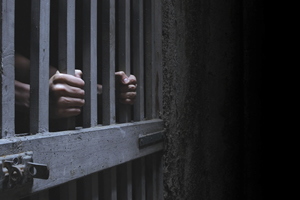 I’ve been to jail. Not just once, but 12 times. The longest I’ve been in jail is 16 days. It was in the Amarillo City Jail, which is old school. There are no TVs, no outside, no nothing. Just sleep, books, cards, and crappy food. The thing that sucks the most about being in jail is you feel that everyone else is going on with life on the outside and they aren’t even thinking of you. It’s as if you’re dead but nobody is mourning you and there is nothing you can do about it except wait. You wait until you get out so you can do better next time, but really you know that you will always hold a grudge against them for living life and against yourself for being the loser who got locked up in the first place. And the cycle continues … it’s like a circle of hell. You know that you put yourself there, but you make excuses. Everyone is out to get you. Life is out to get you. The people who are supposed to care about you don’t, because if they did, they would get you out. The thoughts of self-loathing in jail are intense. From where I sit now I know exactly where the voice of those thoughts comes from: the accuser. His voice is loud in jail: telling you how terrible you are, how much of a failure you are, how everyone is a liar, how they don’t love you, how you are worthless, how you have a right to hate everything, and on and on. You start to adjust to it and start making friends and trying to make the most of your time. And then comes Sunday. The church people come in and stand there and preach at you about how you’re a sinner. I would always just pretend to be asleep with a towel over my face but under the towel I was crying. Because I knew what I was, I didn’t need anyone else telling me, I had that voice in my mind that wouldn’t shut up from telling me. What I needed to hear was about Jesus and how Merciful God is.

Today, I cried thinking of what it would be like to be in prison and have the Pope say Mass and wash the feet of prisoners in there. Currently I have two cousins in prison, my oldest son’s uncle is in state jail, and my kids’ father is in jail. All of them are there because of bad choices they made. Regardless, I know all of them are loved by God. Who is going to tell them that while they sit in there with that voice accusing them of being nothing and unloved? The evil one is there no matter what. Who is going to take Jesus to them? Many people have opinions about what Pope Francis is doing. Some of those opinions are rooted in selfishness of wanting the papacy to be run their way to make them feel better. (Anytime people center their opinions based on their feelings it’s rooted in something that is not virtuous.) But as someone who has been in jail and knows what goes through the mind of someone in there, I think what he is doing is showing the rest of us, by his example, that the time for talk is over. It is time to walk the walk.

That is what Holy Week is all about, isn’t it? Jesus walked the walk. He spent three years talking, on Holy Thursday He instituted the Eucharist and the Priesthood, and the following day he walked the walk carrying His cross all the way up until He was crucified on it. What scares me is that this is what Pope Francis is all about. He is all about the Cross and I am all about talking about it. I’m not about carrying it and letting anyone hang me on it. But isn’t that the point of Lent? To die to self? Some of us need to die to our feelings, some need to die to self by not making rash judgments of others, and some of us need to die to self by giving up the talk and start walking the walk.

I would suggest that we all follow our Pope’s example this Holy Week and practice some Corporal works of Mercy:
feeding the hungry
giving drink to the thirsty
clothing the naked
offering hospitality to the homeless
caring for the sick
visiting the imprisoned
burying the dead

May God use us to take Christ to those who need him the most.

4 Replies to “Time to Walk the Walk”