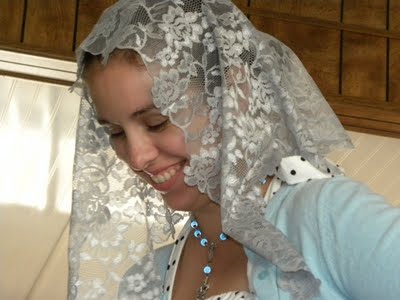 This giveaway has been on my “to-do” list for quite a while. When we first started doing giveaways, I asked Lily of Veils by Lily if she would participate and she was thrilled, but then we both realized {at that time} that the holidays were on the horizon and it would have to wait until the new year.

We have successfully crossed the holiday season threshold and I am FIRED UP to get the first giveaway of the 2012 year started!

Our winner will receive their choice veil or mantilla from Veils by Lily!

Lily is someone from my original online group and about 18 months ago she mentioned she was starting a new business! A few months later, *I* decided to start a new business and found myself picking her brain – poor Lily!! – she was so gracious to let me ask her all kinds of startup business questions.

About a month ago she wrote a post for us sharing how she was called to veil. I am so proud to call her a sister in Christ {ok, so I’m a sucker for all my girlfriends in the Faith and proud to call each of them friends 🙂 }.

While I have not personally felt the call to veil, I have many friends who do and have seen the devotion increase at my own home parish in the nearly six years we have been there. I see their devotion to veiling as an outward expression of that spiritual stirring inside. I don’t look at them with a feeling of jealousy, as in why haven’t I been called, but I look at it and I just see the beauty of what God has placed on their hearts.

Even if you haven’t felt the call to veil, don’t let that stop you from entering the contest!

Lily has an AMAZING selection of veils, from the popular Black Triangle Chantilly Lace Mantilla, her signature line of

mantillas that includes all kinds of fun colors, the limited edition veils and mantillas, and even first communion veils! With First Holy Communion on the horizon, this would be a great time to pick out one for a daughter, goddaughter or niece!

To enter this giveaway, do the following:

One winner will be selected and announced on Wednesday afternoon.

Do you still need a reason to enter? Consider this – Lily does not use PayPal, a company in bed with Planned Parenthood, instead opting to use a payment system with the same values that Catholics do, protecting and upholding the dignity of all life, starting in the womb.

134 Replies to “This is not a veiled attempt at a giveaway – we ARE giving away a free veil!”