The Way to Where?

Last summer when I heard about the new movie by Emilio Estevez and Martin Sheen entitled, “The Way,” I was very excited about seeing it.  After all I have seen “The Fourth Wise Man” and Martin Sheen is Catholic and holds passionate Pro-life views .  Instead of providing an inspiring, uplifting movie that led the viewer towards a deeper relationship with God, it depicted broken people who, while traveling the Camino de Santiago, they journey towards self discovery and learn to accept and love who they are, character defects and all.

THE POWERFUL EFFECT OF MEDIA

Media of all types is very powerful, the views of the writer or director come through in the story and are intended to convince us of something or help us to see an issue or lifestyle in a new light.  We are profoundly shaped by the media we consume, the more time we spend with it, the more it shapes our attitudes, values and life choices.  The effect is intensified the younger the viewer is.  Be careful little eyes what you see and hear, they are the portals into our souls.  I have written much more about the effect of media at my personal blog, please read this article if you need more convincing.

A REVIEW OF THE WAY

Based on my conviction that media is a very powerful means of shaping our beliefs and attitudes, I have reviewed “The Way”.  The Way is set in a picturesque area of the world that many of its viewers are unfamiliar with.

The Camino de Santiago (The Way of St. James) begins in France at the edge of the Pyrenees Mountains and travels about 800 km to the tomb of St. James in Santiago de Compostela, Spain.  Most of the pilgrimage is through quaint Spanish towns with a healthy dose of character.  The journey is completely on foot and the accommodations along the way are rustic.  The Camino de Santiago is a traditional Catholic pilgrimage route and there are many Catholic pilgrims, artwork, and Churches along the way.  The Way features a Catholic priest pilgrim who carries with him more than a few rosaries to distribute to other pilgrims. The police officer whom the main character meets prior to his journey is a devout Catholic who attempts to share his religious experience of the way, which he has made three times (there and back).  The movie almost reaches its climax at the Cathedral of St. James where it appears the pilgrims attend mass, but the main scene in the Church is of the Botafumeiro, which is a famous thurible, that swings over the altar.  For the casual observer, you might think it is some kind of side show or tourist attraction that takes place within the Church.  The entire film was shot on location and thus there are many real life pilgrims who were caught on film with the actors.

The main character, Tom, is a lapsed Catholic who is mourning the death of his son.  The Dutchman is experiencing

difficulty in his marriage and struggles with his weight.  The lone Female was a battered wife, committed an abortion and is a chain smoker.  Lastly, we encounter an Irish writer who is very eccentric, has writer’s block and hasn’t set foot in a Church in quite a few years.  Each of these characters is likable, we see much of ourselves in them.  Only the Dutchman appears to have a true encounter with God at the end of the movie and appears to surrender to the divine physician for healing from his brokenness.  However, at the end of the tale, each character comes to accept him or herself as they are with no apparent resolve to amend their lives.

This movie is rated PG-13 for a reason, this is not a kid friendly movie about a Catholic pilgrimage.  Drugs are a prominent and recurring theme throughout the whole movie.  The drug use is displayed in a humorous, “Breakfast Club” kind of way, no bad effects from drug use, only fun, fun and more fun.  The movie does have some profanity, I can’t recall the number of times nor the specific words, but it is fairly recurrent throughout the film voiced mainly by the hip young people.  It is portrayed as normal to use vulgar language as part of everyday speech.  Smoking is also featured positively and all the cool people are doing it.  One of the funniest scenes in the movie is when the Female traveler rises early and is taking in the beautiful scenery and a man wearing only a thong yells out a greeting to her while he is gathering his clothes from the drying line.

Director Emilio Estevez stated during the question and answer session at the screening I attended, that the main message of the movie is “I’m ok with being exactly who I am”.  We are all broken, true enough, and each character seems to receive some healing from this brokenness, but it was unclear where this healing came from.  In a sense, they accepted their brokenness instead of seeking out God to heal it.  The positive portrayal of vices, smoking, drug use, gluttony, is a real point of concern for me as a father.  Smoking, drugs and over indulgence are real problems in our society today, our Christian faith calls us to be free and to be masters of the flesh.  This movie presents an alternate message that to indulge is human and it can be fun and rewarding too!

The body of Tom’s son was cremated, and then distributed along the Camino and dumped into the ocean at the end of the movie.  Besides this going against Canon law (which Emilio and Martin made clear that they were aware of and didn’t care), it communicates a lack of respect for the human body.  The Church’s law concerning the proper treatment of mortal remains exists to protect the dignity of the human body.  The movie uses this recurring activity (disposing of the ashes) to symbolize Tom’s letting go of his son and it is effective, I fear that it may cause many more people to choose this method of saying farewell to a loved one.

IS THE WAY A CATHOLIC MOVIE?

In this writer’s opinion, the answer is no.  Unfortunately, it is being promoted heavily in 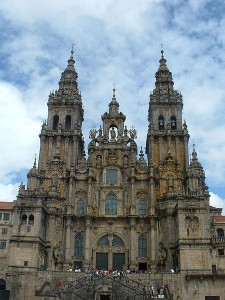 Catholic circles.  The Way is a secular movie in a Catholic setting.  Unfortunately, one can come away from this movie viewing the Catholic Churchas scenery in everyday life.  In Europe this has already happened, the beautiful Catholic Churches are more museums than places of worship.  The message of Christianity is viewed as historical fiction, rather than the living good news of God communicated to his children.  According to director Emilio Estevez, The Way is a departure from the message given in popular Hollywood movies today (Emilio and his Dad funded the movie themselves and thus it is considered an Indie film), but I beg to differ.  Many movies contain too much violence, too much sex, and frequent positive portrayal of objectively immoral actions, the Way avoids most of this and instead preaches a gospel devoid of God. God is portrayed as unnecessary for happiness, the only thing that is required is to get away from the rat race and take a long walk, it is in this solitude that you will find yourself and then you will truly be happy.

Have you seen The Way?  If so, please share your thoughts on the movie and if you agree or disagree with my observations.