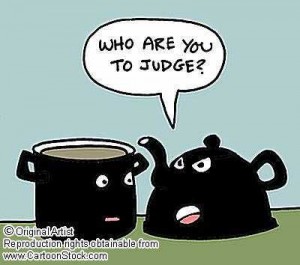 Have you ever had this happen to you? You sit down in the pew before Mass starts, you pull down the kneeler and begin to say your prayers. When you’re done, you sit back and calmly look at the beauty of the altar and what’s about to transpire in a matter of minutes. Then, you hear people whispering behind you. The whispering turns to low chatter. After several attempts of ignoring, it’s enough to aggravate you and tear you away from mentally and spiritually preparing for the Sacred Mysteries. Your eyes and ears are now fixated on other things going on in church…and not in a good way. Your eyes are drawn to a family that looks like they just walked off the boardwalk. You look away, saying nothing. But the damage is done. The thought that crossed your mind did enough damage by rendering rash judgment of a situation or person.

The eighth commandment is one that seems fairly simple to follow…but is it? On the surface it reads very straight forward –

thou shalt not lie

What does that encompass, exactly? According to the Baltimore Catechism, it outlines the eighth commandment as one that commands truth and forbids lying. {Incidentally, I find the irony too delicious to keep to myself. While writing this, I had my oldest bring me the catechism. She quickly located the 8th commandment and then handed it to me, using an examination of conscience brochure as her “bookmarker” – is she trying to tell me something??} I have to say I really like the Baltimore Catechism because it doesn’t mince words and uses fancy words to describe sins, making it easy for me to not only identify what my faults are but say exactly what they are to the priest…I can also give the illusion of being smart, too, while repenting. It’s win-win! There are several sins that fall under the category of lying – rash judgment, detraction, calumny, and telling secrets we are bound to keep. We will spend future articles addressing the other sins so I will focus on rash judgment for today’s entry.

I want to start with rash judgment because thoughts typically infiltrate our minds first. We don’t often say something without first thinking it. A person commits the sin of rash judgment when, without sufficient reason, he believes something harmful to another’s character.

The problem with rash judgment is it appears innocent enough…oh, it was just a thought {if you’re lucky enough that it didn’t escape your mouth!}. It can be easy to justify or brush off as “it wasn’t that bad” but the effects are very real. I heard it best said once, “the best way to kill your conscience is to ignore it.”

If you find yourself criticizing someone who is wearing a veil to Mass because she must be “holier than thou” or thinking to yourself that the family next to you with only one or two children must contracept, keep in mind those thoughts are where it starts.

It’s a mentality that plagues all of us at one point or another, myself included.

So, how can we combat this all-too-easy-to-fall-into-the-trap sin? Well, I’m a huge advocate for piquing awareness, or the constant realization of our wrong doings. Let’s call it an ongoing daily examination of conscience. We can first start by recognizing on our own when we first formulate those thoughts. One way I personally combat this is to actively come up with a list of plausible antidotes to my flawed thinking. So, when an ugly thought crosses my mind, I automatically force myself into a “what if” scenario and then make myself reflect on the damage my initial thought causes others…and especially myself if I dwell on it too long.

Let’s go back to the family with two children I described above. The first thought that could pop into my head about making assumptions about family size, or worse, accusing them {if only through my thoughts} of not being open to life…my immediate thought process in order to combat this could be the following:

Our homework from now until the next time we meet to continue discussing the 8th commandment* and all the fun new words for sins is to pique that awareness when we are headed down the road of rash judgment. Do your best to pinpoint those flaws because your best weapon against overcoming rash judgment is to know when it happens.

*I had been wanting to write something about rash judgment for such a long time that when I finally did, the obvious next thought came to mind – too late. It would be PERFECT to start a Ten Commandments series! Of course, this would ideally start with the 1st commandment, not the 8th. So for that, I apologize that it will appear choppy as we start going through each of the commandments. Mea culpa.