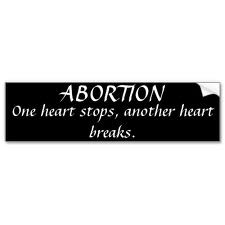 While Planned Parenthood is busy desperately painting a picture today that rosies up the effects of abortion, we at Catholic Sistas don’t care about sugar-coating this evil with a nauseating shade of pink. We want you to know the true stories of real women who have suffered abortion, not just the pro-abortion soundbites and marketing you can find here at Planned Parenthood’s website.

The following story was submitted just this morning. We pray it has a profound effect on the countless women who suffer in silence. Your story needs to be heard, you aren’t alone, and there is forgiveness and peace after abortion.

We are dedicated to collecting and sharing your stories, so if you feel called to share how abortion has negatively affected your life, please e-mail me Martina{at}catholicsistas{dot}com.

On this Day of Prayer for the Legal Protections of Unborn Children, I have decided to tell the story of my conversion back into full communion with the Church I loved and grew up with. It is not an easy story to tell or to read. I only ask for your prayers for all mothers who have not made the right choices in life.

In the spring of 2000, when my son was in 5th grade, he developed a loud vocal noise that sounded like he was choking or going to be sick, then barking animal sounds. He was diagnosed with Vocal Tics, a form of Tourette’s Syndrome. We removed him from school and his homebound teacher would come for a couple of hours every other day. He had to keep up with his schoolwork basically on his own.

Not knowing when or if the tics would end, as well as the demands of some of the teachers, made it very difficult for me to cope. I could do little except tend to my son. Friends stopped calling and family members criticized how we were handling the situation. One day several years later, I remember driving through our neighborhood and asking God why couldn’t my son just have one normal day and go to school like all the other kids. I became very bitter and angry at God. I stopped going to church all together. Finally, in his 8th grade year, the tics settled down and he could return to class full time.

This experience brought me spiritually and mentally to my knees. Instead of turning toward God, I had run from Him and blamed Him, feeling our struggles were punishment for the sins of my youth. You see, I have had an abortion. More than one abortion, actually.

I truly felt I was being punished for my past by God. I really did not know what to do about it, though, as I was Catholic and Catholic girls were not supposed to do THAT. I am not sure I understood why, but I now know it was keeping me from really embracing my faith.

Over the years, my family would sometimes participate in religious education. When it was time for my daughter to start the Confirmation process, I offered to help and was assigned as an assistant teacher to a class. I did not want to get too close to the people there, though, as I feared my sins might be discovered. I thought I really did not belong there, but I wanted to serve. As we went through the year, I learned a lot about why the church has certain beliefs and truths that never really made any sense to me. I am sure this was because of my hardened heart.

The diocese had a new program at the time called “Ethics and Integrity in Ministry” that required those serving in the Church to fill out an online application, undergo a background check, and attend a workshop. The class was tough, especially when we watched videos of children who had been abused and those responsible for the abuse. As I was reading through the material given to us, under the “Standards of the Diocese” were activities listed that responsible adults should not engage in. Listed there was:

III.B.1.c) Procuring or participating in an abortion.

Whoops, they were talking about me. Not only had I had an abortion, but I had had multiple abortions.  I finished the workshop, but that guideline stayed in my mind. As we went through the year with the teens, the thoughts of my past abortions occurred more and more and I just kept sweeping them back under the rug. No one could tell by looking at me, after all.

Reconciliation and prayer was a part of the Confirmation process for the teens. I had managed to avoid the sacrament for 25 years or so. Our priest, however, felt it was important to come to confession regularly. He preached it, lived it, and offered multiple times one could receive the sacrament each week.

When the group would do pro-life activities, the thoughts would come back and I would sweep them back under the rug again. I just hoped every time I went to class that the topic wouldn’t come up. I hated even hearing the word “abortion.” I came to believe that as a teacher, I could not ask the teens to do something I would not do. So I  decided that after Confirmation ceremony, I would work on my own spiritual life. The Lord knows I had more sins than all the kids combined, I thought. I was ready to take my punishment and live with integrity again.

I initially thought I would go to the other side of town, where no one knew me. There, I would confess my sins and then be asked to leave the Church and never come back. Because the Church did not need people like me in it. But then I decided I would do it at my home parish and take whatever comes from it.

I made several attempts to go to Reconciliation and chickened out. I would get as far as the parking lot, then decide I couldn’t do it. Finally, one Tuesday afternoon, I was determined to stay. When it was my turn, I went in and knelt down behind the screen. The first thing I heard was a voice that pleasantly said, “Welcome!” This isn’t how I remember Confession being 30 years ago, I thought to myself.

“Bless me Father for I have sinned. It has been 25 years since my last confession. I have had four abortions.”

You know that rug I had been sweeping everything under? It was finally being cleaned. I hadn’t even been aware of everything under it, nor how big the pile was that I’d been tripping over. Father did not belittle me or scold me in any way, but gently asked if he could ask me some questions. He asked a lot, going way back to help me grasp what I had done to myself and others. I had never talked about these issues with anyone in such depth. No one in my family, the psychologist I’d seen…no one.

We talked for a while, then Father said, “I have good news!” He said God forgave me and he absolved me. When I finished, I could feel the terrible weight of my burdens being lifted off my shoulders. Father told me I could visit with him for more spiritual guidance. He also handed me a Project Rachel pamphlet and said I should go on one of its retreats, as he had heard they were “awesome.”

I stayed for the Mass, tears and all. I had not been to daily Mass since junior high. Of course, I sat near the back. I remember Father picked “Come, Holy Spirit” for the entrance song. I truly felt for the first time in many years that I was in God’s presence. I could feel Him there with me in mercy and forgiveness. I realized something so important: God never really left me; I left Him in all my darkness.

I did meet with Father several more times. My secret was not my mine and my husband’s anymore. I laid it all out there and it was not a pretty sight. But our priest stayed with me and gently guided me toward healing. So many memories came back and flooded my mind. We talked about forgiveness and mercy, as well as how to reestablish a prayer life and follow Christ. He helped me shed the lies of society that I had believed for so many years about abortion.

I had done things that were so wrong, so very wrong, yet Father never scolded me. He helped me own my sins and accept responsibility for them, but also taught me I can repent and be forgiven. I had had no clue how to be forgiven, probably because I had not been able to forgive myself for so long. I knew I needed a change of heart. But could I sincerely change from pro-death to pro-life after what I had done? Father and I prayed together and it was beautiful for me.

He encouraged me again to attend a Project Rachel retreat. I had never been on a retreat before, but I called the number for Project Rachel and discovered there was going to be a retreat in my town the next weekend. I decided to attend. I wasn’t sure that sharing my story would be anything anyone would want to hear, but I wanted to hear from other women like me. After all, this wasn’t exactly dinner conversation.

It’s a good thing the retreat was so soon; I did not have much time to think about it. The retreat was at a small house and the retreat leader and the leading priest were there to greet us. Six other women attended. We talked and introduced ourselves. Our first task was to write/share why we came and what we hoped to get out of this retreat. I decided to attend after years of feeling distant from the Church and God, I wrote. I shared that I had felt the gap getting bigger and wider, though I kept telling myself I was okay. I shared my problems with anger, depression, and anxiety. I had always wanted to go back to church, but I’d had this huge roadblock: a voice telling me I did not belong there because I was a liar and not good enough. We did a lot of soul searching that weekend, and healing began to come slowly.

As we planned for the coming year of Confirmation, I felt this time I was more spiritually ready to teach. Our theme was going from darkness to the light of God and I was definitely an example of that concept. There were a lot of pro-life activities planned. We were going to attend the Respect Life Mass at one of the area churches, then participate in the Respect Life March in Washington, D.C. on the anniversary of Roe v. Wade. I knew I wanted to attend Mass, but decided not to attend the March. I was surprised by all the people at Mass, both young and old. I recognized many from our parish and I remember thinking, “All these people support life.” To them, it was natural to support life; they were so innocent and alive.

We finished our classes and I could really feel my heart changing. I wasn’t much on forgiving others, so I made myself a promise that I would start to forgive. It wasn’t easy, but with prayers and help from the Holy Spirit. I found it in my heart to forgive those complicit in my abortions, as well as others in my life. What a difference it made to say, “I forgive you,” if only in my heart—and mean it.

I finally know not only that I am forgiven, but that God’s mercy is endless.

10 Replies to “The Truth About Abortion: A Post-Abortive Woman Shares Her Story”