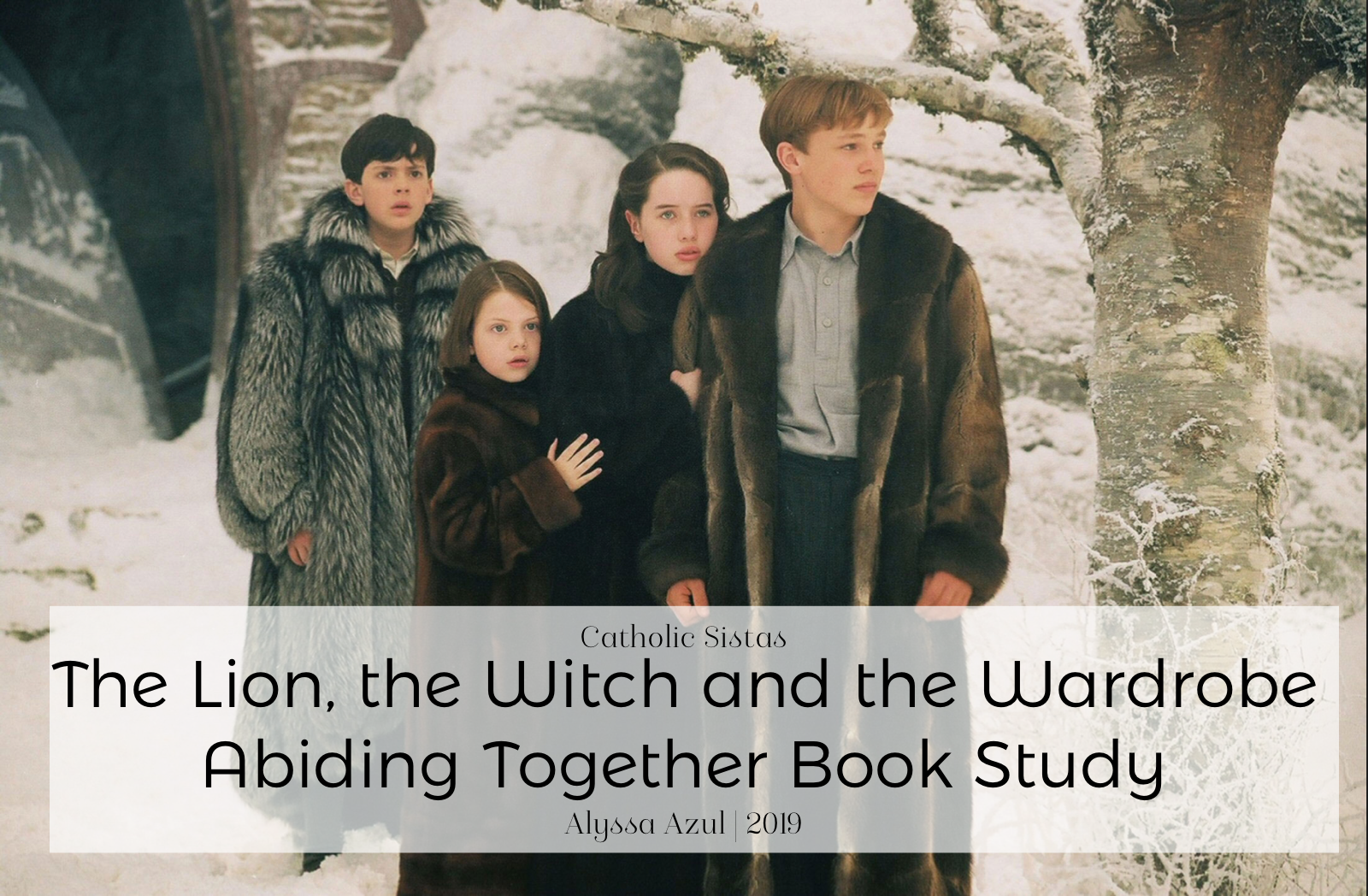 I want to take this opportunity to shine a spotlight on a podcast I’ve been following called Abiding Together by Ascension Press  (some of you may already be impassioned listeners!). It’s hosted by Sr. Miriam James Heidland, Michelle Benzinger, and Heather Khym. I am one of those humans that works a delightfully mundane 8 to 5 – Monday to Friday gig, and so the drive home for me is often a lonely one. These three ladies have done a remarkable job of keeping me company by bringing light, laughter, and passion back into my commutes. I love that each host has her own style, voice, and wisdom on different topics. Their conversations are life-giving, and they exhibit what authentic and loving sisterhood looks like. What I hear from these podcasts are impassioned women gearing up for battle. This is a great segue into the book study I want to share about that I’m following  on C.S. Lewis’ The Lion, the Witch and the Wardrobe (first four chapters here.) This series began in January, and the three ladies get together and discuss the story in weekly installments, every four chapters. You can read along or just tune in! I guarantee you won’t miss out.

I never thought that I would  be digging out that old C.S. Lewis book I read when I was in junior high out of my musty old drawers. I never even thought I would read it again as an adult. I urge those of you that have that book or remember reading it a child- READ IT NOW. Or better yet, read it with your kids.

C.S. Lewis’ foreword is beautiful and truly set the tone for this adventure we embark on with his goddaughter-inspired heroine, Lucy.

My Dear Lucy,
I wrote this story for you, but when I began it I had not realized that girls grow quicker than books. As a result you are already too old for fairy tales, and by the time it is printed and bound you will be older still. But some day you will be old enough to start reading fairy tales again. You can then take it down from some upper shelf, dust it, and tell me what you think of it. I shall probably be too deaf to hear, and too old to understand a word you say but I shall still be

We follow the adventures of the four Pevensies: Peter, Susan, Edmund and Lucy (eldest to youngest) on a journey from the present reality of New England during World War II into the cold winter of Narnia, a  mystical land on the other side of the wardrobe.

As much as I ( and what seems like the rest of the universe) loves Lucy the young, pure and bright-eyed heroine, my favourite character thus far has to be Peter. I find him the most intriguing, because of his role in the family of four as well as in what his ultimate destiny will be. The beginning of the story focuses more on Lucy and Edmund (the younger of the four), and we see Peter and Susan more like character foils. Peter is a bit of a ‘naysayer’ in the beginning, but of course, that only makes for interesting revelations later on. He is, I find, the most sensible of the siblings, but you can’t help but want to pinch him and tell him to loosen up a little.

I also love that he isn’t the “main” character, even though his archetype would typically fit into that mold. He is destined *SPOILER ALERT* to become a High King of Narnia, yet he is just a piece of this vast, wonderful story of creation, much like you and I are. Each of the siblings have their own important roles in this story, whether they triumph in the end or not.

I also relate to Peter in a particular way. Like him, I am the eldest of four siblings, and I carry many of the flaws that he does. As the eldest, there is a sort of expectation for us to be virtuous, and as upright as possible. The leader of the pack must guide them to make the right choices, and ensure that no one is left behind. This responsibility and righteousness can cause us to be short with others who do not measure up- especially those in our care. We may also be righteous in the wrong ways. Peter is quick to chastise Edmund and soothe Lucy (even though it makes her feel talked down to). Eventually he concedes to Lucy’s testimony of what she saw in the wardrobe, but not without admitting that he was wrong, and I appreciate that about Peter.

I also think that CS. Lewis is delightfully conspicuous when he wants to be, especially when it comes to Peter’s namesake.

Peter was not only the first disciple chosen by Jesus, but eventually he is a story of redemption. What comes to mind when I hear the name Peter is fortitude. I recall Matthew 16:18,

And I tell you, you are Peter, and on this rock I will build my church, and the gates of Hades will not prevail against it.

I can’t wait to see what’s in store for Peter, and how his first interaction with Aslan, the Great Lion, will go. More to come on the exciting adventures of the Pevensies. I hope you all take a leap of faith into the wardrobe.

“Well, sir, if things are real, they’re there all the time.”

“Are they?” said the Professor; and Peter did not quite know what to say.

– from Chapter Five, The Lion, the Witch and the Wardrobe.