The Farce of Reproductive Rights, or, How to Turn Personal Liberty into Slavery 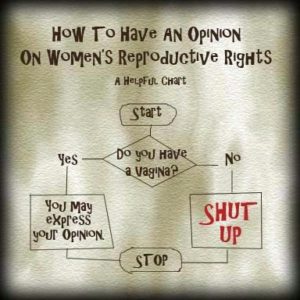 To whomever composed this meme:

…except that half of every human being comes from the father.

…except that from the instant two gametes unite the 46 chromosome zygote isn’t the mother, and it isn’t the father. It’s itself.

…except that people want the state/taxpayers to pay for your opinion and your “rights.” If you are paying for your opinion, that’s fine. Someone else? Well, not so fine.

…except that other people want the state to impose what goes on in their bedrooms as “just as normal” as real marriage, so you’re up against the two-edge sword of hypocrisy.  Just like the “reactoids” that say killing a guilty criminal is the same as an innocent and defenseless child in the womb (I’m not one of them…guilt and innocence mean something), you can’t demand the state enthrone sexual gratification as a right and institution in the same breath you ask the state to allow you to kill a human being in your own body, at your own convenience.

…except that women want the power of the state to ensure this “right” based on privacy, even though it directly conflicts with the right to life, liberty and the pursuit of happiness on which this country was founded (supposedly).

One could, even, in a ridiculously hyperbolic moment, say that the unborn are the last face of slavery in the modern world, because really, if you are free to use yourself any way you want and choose the fate of other people you create, what makes you different from a plantation owner?  Let’s not forget that any people born to slaves were property too, to be used, bought, and sold. We can’t buy or sell children now, and we fought a war of great price over the issue that greatly divided this country, but we can kill them at will. And irony of irony, Margaret Sanger and the PP folks are the face of ethnic genocide in the world today, doing everything possible to kill as many of “those people” as they can with their domestic and exported “family planning” otherwise known as the “make sure blacks and Hispanics don’t breed” program.

SCREED ENDS, FOR THE SAKE OF BIOLOGICAL FACTS

The zygote is genetically programmed to implant in the uterine wall. The zygote divides itself, makes a sac for development, establishes the line of growth in the umbilical cord, and differentiates its own cellular growth from an embryo to a fetus to a child until it is sufficiently mature to survive on its own.

Scientifically, outside of hormones that change and supplying glucose and nutrients and oxygen and waste transport, a woman’s body doesn’t do anything actively.  It isn’t her body growing. It isn’t her cells at all.  It’s the other way around.  Every child a woman conceives, whether it lives or dies, contributes its own cells and DNA back to the mother.  So give birth to, abort, or miscarry; your children will always be a part of you. Just look into recent studies in Microchimerism.

AN EDITORIAL INNOCULATION ABOUT TODD AKIN

I’m generally ignoring Todd Akin’s ill-conceived and poorly worded concept of “legitimate rape” because less than .1% of abortions in the United States are due to rape and incest. On that note, rape is horrific and I believe a rapist should be punished by castration, but the person that results from a rape isn’t any less a person. And on incest, please, let’s get real. It’s one of the bottom forms of disgusting in the species, but the argument nonetheless applies: the people who result from it are no less people to be killed because of violence or depravity.

You can if you want recoil in horror at my words, but just as horrific rape and incest and abuse of women are, children conceived out of the circumstance, are, regardless, still people and so they are worthy of life.

The real topic isn’t “reproductive rights”; it is society ignoring the fact that the uterus is the medium for the gestation of the human race in general, and in particular is the place for an entirely separate, unique human being that isn’t the mother and isn’t the father. This is basic science. This isn’t morality. Let’s leave “God” out of the discussion.  In fact, when it comes to same gender equality, we can leave “God” out of it there, too.

If it was your own body, it would be your choice. But reproduction involves someone else that isn’t you. They are just living in you until they can live on their own.  You would think the womb would be safe place, but 4000 people a day in this country find out it isn’t, and countless tens of thousands more are killed across the globe, by force, or by choice, every day.  Nothing like turning your own body into a bloody battlefield, eh?

The unhappy, and rarely mentioned, consequence of ready-made birth control is that for every inch of sexual liberation women have “gained” by the pill, they have had a mile of degradation and objectification “imposed” on them by it.

Sex is supposed to mean something.  It is part of us.  It is integral to who we are as a species, and as genders. Generally speaking, every person born can eventually impregnate or be impregnated.  When sex devolves to recreation while intentionally stifling procreation, it leaves people either empty or preoccupied with gratifying themselves. With that attitude, we end up with teenagers that are encouraged to do whatever makes them feel good, consequence-free; by the time a girl or boy gets to their post-college years they’ve already killed the spark and joy and fun and love that sex is supposed to have for a person.  Look around.  There are clusters of pregnancies amongst girls, sex parties, coed sleepovers and sex buddies and all manner of cheap empty degradation.  I just heard from a friend of a friend whose 15 year old is pregnant and doesn’t know who the father is because she and numerous other girls and guys had a coed sleepover at someone’s house and she slept with three or four guys in one night at an all-night orgy.  This, apparently, is a common practice in Japan.  Sex buddies.  Clusters of teenagers whose social circle revolves around the people they have sex with.  That’s what the common bottom dollar denominator is when you can sterilize yourself on a whim and sex becomes solely about recreation.

When procreation drops and recreation reigns, and when children are optional life accessories, and not something integral to who we are, life itself ratchets down several notches.  The step from “my body has the ability to create new life and I need to be responsible for that ability by embracing it, not skirting it…” to “my body is for my pleasure and when and if I want to use it for making children, I will…” is a huge problem.  Short-term thrills give way to long-term problems, and we see the rapid rise of abortion rates, sterility and fertility problems, depression, emotional turmoil, disease, sex slavery, forced prostitution, child abuse, and abuse of women.

No, that isn’t an illogical leap.  One of the biggest “advances” in sex slavery has been forced contraception to keep prostitutes from getting pregnant.

And let’s not forget casual sex’s kissing cousin – the homosexual subculture.  What’s on the rise again?  Good old fashion antibiotic and antiviral-resistant venereal diseases like gonorrhea, syphilis, genital warts, herpes, and others.  The gay bath house culture is back on the rise now that the cocktail has made AIDS no longer a death sentence, so you can’t die from AIDS now, but you might have to go on industrial strength antibiotics and antivirals to combat your latest STD.

What’s worse is that this path on the big scale is ultimately a death spiral.  Look at places like Russia, Italy and Japan. They are societies of sterile, empty sex with women having abortion after abortion with no marriage and no children, or engaged in different methods of contraception that does who knows what to your body over time.  Then look at China.  Millions killed by the state each year for population control, and people forced to contracept so that they don’t have their children killed or have crushing taxes imposed on them for having more children (35-65K per child in taxes).

Does this country, any country, really, really want to end up like that?  Look at the real, day-to-day face of “population control” “family planning” and “sexual liberation.” If it doesn’t frighten you… it should.

Instead of being coy by saying a man should have no opinion about abortion, even though about 48% of every human being is their father’s DNA – why don’t you think human beings that aren’t born yet have no right to live?  You can sexually recreate, but you can’t accept responsibility for the fact you can create new people while you’re recreating? Of course you know you can procreate. There wouldn’t be 29783 ways to prevent procreation, so that you are free to recreate and perhaps spread a disease or two.

TIME TO STOP BRUSHING OFF CATHOLICISM AND START LISTENING AGAIN

I know people look at Catholics and religious people in general and think we’re either general freaks, control freaks, or prudes, but it isn’t so much controlling or being a freak as it is understanding the real world impact of high level moral attitudes and permissive attitudes. My view of the world is twofold: the moral realm, and the practical realm of decision making in what people used to call the Natural Law.  Morality and immorality have consequences. The convenient truth for more than five hundred years of western civilization is that humanity needs to cast off the yoke of Catholic stricture and Popes saying no.  The real truth is that after casting off Catholicism for five hundred years, the world is a poorer, more troubled place.  Politics, morality, sociology, psychology, economics, sexual ethics, medicine, you name it… each facet of the modern world ails from the lack of wisdom and restraint true Catholic Faith brings.  In embracing “liberty” the world has instead embraced slavery.  And worse, most times it doesn’t even realize it.  The world needs to listen to Catholics, instead of trying to extinguish it or co-opt it like the Obama administration is right now.

Civil rights in this century aren’t about intrinsically STERILE same-gender sexual recreationalists being treated like normal biological partners. The real civil rights movement is that of the unborn TO BE BORN without extermination by the state, or their own mothers, along with Catholicism having a right to exist, a right to inform, and a right to practice our faith without prejudice.

And so, in response, I have a better, pithier meme.

CHOICE: The New Battlefield. The New Face of Slavery. 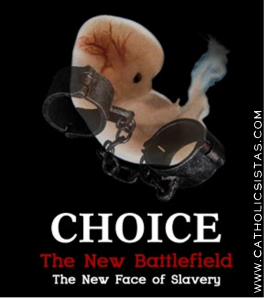