If you’ve been paying attention to the news lately, you probably have heard about the situation that has been going on in Baltimore, MD over the last couple of weeks. If you don’t know what I’m referring to, the gist of it is this: a 25 year old black man, Freddie Gray, died from a spinal cord injury sustained while in the custody of Baltimore police, and six officers were charged with (but not yet convicted of) several crimes related to the incident, ranging from false imprisonment to second degree murder. There has been much protesting of racism and police brutality, as well as some extremely violent, destructive rioting, in the name of Freddie Gray.

This situation has been weighing heavily on me.  Although it doesn’t affect me like it affects Gray’s loved ones, or citizens of inner-city Baltimore, or Baltimore police officers, it does affect me in a personal way.  I’m the wife of a police officer. These incidents always seem to lead to an increase in both hateful rhetoric about and violence against police officers. During times of unrest, my anxiety when my husband leaves for work is higher, as the potential danger to him (and my awareness of it) is higher. I’m also truly heartbroken by what I saw play out in Baltimore during the worst of the “protesting,” and more importantly, by the possibility that six officers showed heinous disregard for the rights and life of another human being. No one deserves to die as Freddie Gray died, no matter their background. 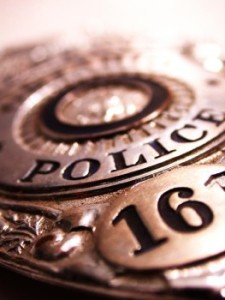 On the subject of police misconduct, most people are happy to divide themselves into one of two opposing camps, tearing down their opponents with insults and angry words. To many people, everything is black and white: Cops are racist. Cops always abuse their power. Cops are the real “thugs.” Or, Racism isn’t really a problem anymore. The police were just doing their jobs. Criminals deserve what they get, and they’re better off dead. As a police wife, there is a temptation for me to plant myself firmly in the latter camp. Defend police no matter what; act like the world is obviously divided into heroes and villains (with cops always being the heroes of course). Police and their spouses/children are all part of one big family, and I hate when people speak badly about my family.

It reminds me another situation in which the world was insulting my family, and all I wanted to do was defend it. During the Church sex abuse scandal, I didn’t want to acknowledge that my beloved Church had failed so many people. I didn’t want to see any criticism of the Church as anything other than the words of “enemies.” But, the truth then, as now, was that the world isn’t as simple as I wish it were. Both priests and police are human beings, and the one thing that {nearly} every human being has in common is sin. There are bad police out there–though they are not the majority–just as there are bad priests (and bad teachers, and bad lawyers, etc.) When you are given power over other people, there may be a temptation to abuse it. There is a need for police and loved ones of police to recognize that there are imperfect people –even criminally imperfect—among them, because otherwise we are enablers, just as those who denied that there were priests abusing children were enablers.

On the other hand, it’s wrong to universalize the sins of the minority of police, as if any officer with integrity is an anomaly (or a fairy tale), just as it is wrong when people universalize the sins of abusive priests. It’s also wrong when we do it to people of a certain race or who live in a certain part of the city. Catholics who do this are doubly wrong, because they should know better. When we categorize people into groups and make assumptions about them based on those groups, we run the risk of dehumanizing them. It dehumanizes poor, black people to imply that they are all criminals who deserve whatever is the outcome of their contact with police. It dehumanizes police to say that they universally abuse their power and deserve whatever happens to them at the hands of angry citizens. And, it’s impossible for us to fight against the injustice of dehumanizing one group of people while dehumanizing another.

Back around Christmas, months before the death of Freddie Gray, hatred for police officers felt to me like it was at an all-time high. Assaults and murders of police officers were definitely on the rise. And I was very angry. I didn’t understand how people could think that my husband and all his co-workers were just “thugs with badges,” racists, narcissists, etc. How could fellow Catholics and people I cared about contribute to the dangerous anti-police climate with their overgeneralizations and hateful comments? My husband and I talked to priest friend about the situation.  He had me recite a prayer that really helped me to let go of some of that anger. Here is a version of that prayer:

Let me see with your eyes

Let me hear with your ears

Let me speak with your words

Let me lift up with your hands

Let me walk with your feet

Let me love with your heart

Jesus, in your name, I pray. Amen.

In praying this prayer, I was asking for the grace to fight extra hard against the temptation to pit myself against the “other,” and the temptation to turn away from the hurt of others so I didn’t have to deal with the possibility that members of my police family could do anything wrong. I had to seek to understand where the “other side” was coming from, even if some {or a lot} of what they were saying was wrong. I also had to stop participating in angry arguments with people who insulted my husband and his profession—which he believes to be a calling—and mocked the sacrifices that he and our family make. I had to forgive the people who questioned my husband’s integrity and made us feel unsupported. Now, I’m going through that process all over again in light of this recent incident.

But this prayer is not just about that situation. No matter what the circumstances, seeing with the eyes of Jesus, hearing with

his ears, and speaking with his words, means seeing, hearing, and speaking Truth. The Truth is not usually found exclusively in one “camp” or another in polarizing situations. The Truth is not found in over-generalizing and categorizing. It’s not found in believing and parroting a media narrative that is nearly always one-sided and divisive.  The Truth is found when we look at, listen to, and relate to each other as human beings, precious in God’s sight. And it’s found when we search for it, instead of shutting our eyes in the face of anything that doesn’t fit our preferred narrative.

Lifting up with Jesus’ hands and loving with his heart means that we don’t tear down or fail to love one group because we are focused on another. And it means that we don’t evaluate first whether someone deserves our help or our love. We will never be good enough to deserve Jesus’ love and yet he loves us beyond all measure anyway; so how can we withhold our love from others because we don’t think they deserve it?

Walking with the feet of Jesus means going to some uncomfortable places, both literally and figuratively. Jesus took on humanity and walked in our shoes, so we have to be willing to walk in the shoes of others. Having empathy for people on the “other side” doesn’t mean we excuse their sinful behavior; we need not confuse the two. Being Christ-like never means defending or enabling sin, but it does mean being merciful and compassionate toward sinners, regardless of whose side they are on.

It’s never enough for us to say we are on the side of justice, or goodness, or ethical behavior. Even if we are right about which side that is, our “rightness” means nothing if we do not see, hear, speak, lift up, walk, and love like Jesus.

2 Replies to “Seeing {Current Events} With the Eyes of Jesus”