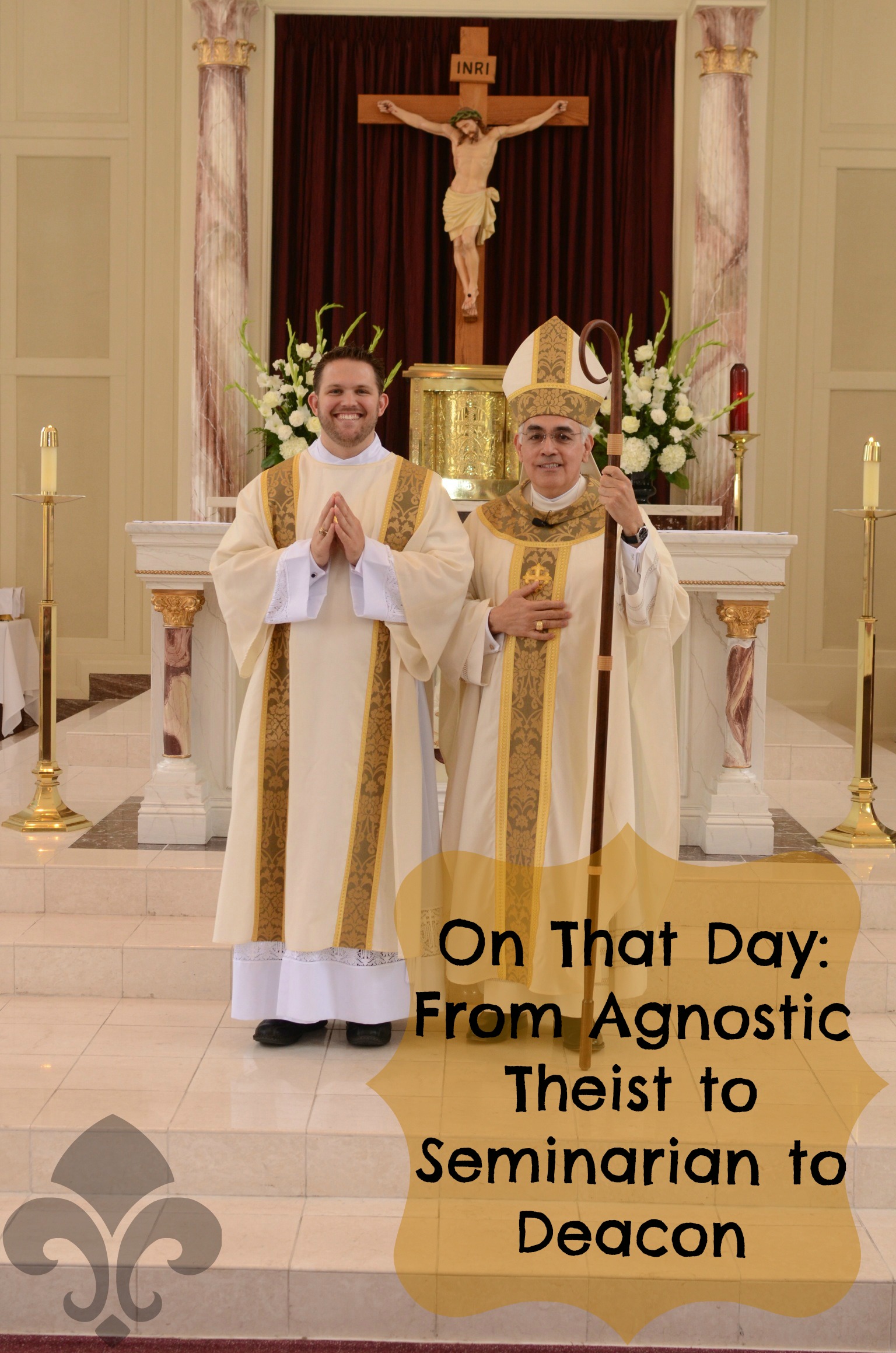 ::Friends, we are excited to share with you the next installment in the ongoing story of Catholic Sistas friend Craig DeYoung, a former agnostic who began his journey to Catholicism, then to seminary. We invite you to get caught up by reading his first four installments, part I, part II, part III, and part IV. And now that you are up to speed, please dive in and see what has happened with Craig most recently.::

On the morning of May 18th, 2013 at St. Mary’s Student Center in  College Station, Texas I was ordained to the Sacred Order of Deacon.  For the last six years I have prepared for that moment and still  prepare for a moment yet to come next year when I am to be ordained as  a priest. But, on that day as I was surrounded by friends and family, I  was called to Holy Orders and then promised to live celibacy as a  total dedication to the Lord and in service to His Church. I committed  myself to praying the Liturgy of the Hours faithfully for the Church  and the whole world, I resolved to carry out the office of deacon and  conform my life to Christ’s own, and I promised respect and obedience  to my Bishop Joe Vásquez and his successors. Moments after this, as I  lay prostrate on the ground I gave my life and all I had to God just  before Bishop Vásquez laid hands upon my head invoking the Holy Spirit , ordaining me as a deacon in the Catholic Church. All in all, it was a  big day. I’d like to offer this article as a reflection about the  ordination and its significance.

It is my belief that an Ordination to Holy Orders is less about the  man being ordained and more about the work that God has done and will  do in him. For this reason, any ordination is an occasion for joyous celebration and much thanksgiving for the local Church. That said, there is usually a larger  turnout by the people of a diocese for a priestly ordination than for  a deaconate ordination. There is more excitement for a priestly  ordination because it is the ultimate goal of seminary formation, in addition to  various other reasons. I mention this because for the seminarian  eventually preparing for priesthood, their deaconate ordination is in some ways the more important of the two. I say “in some ways” because , while the seminarian longs for the day he becomes a priest, it is at t his deaconate ordination that he first lays down his life before God  and gives himself in service to the Church and her members. It is at t his deaconate ordination where he makes his promises of celibacy,  obedience to his bishop, and commitment to praying the Liturgy of the  Hours. For a new transitional deacon, his ordination is a fulfillment,  a beginning, and a transition. It is a fulfillment by his commitment  to live out a vocation faithfully and for life. It is the beginning  of a new identity as a servant lived out in mission. And as a deacon  preparing for priesthood it is a transition which becomes the  foundation for a future participation in the priesthood of Jesus Christ. As for myself, being ordained as a deacon was all of this, and  more.

As I reflect on God’s work in my life and how I ended up where I am,  I think perhaps the most beautiful thing about discovering my  vocation and making a total self gift of myself to the Lord through  ordination, is the realization that I am becoming who I am meant to be.  I am being fulfilled day by day and am becoming more myself, more me.  However, finding my vocation and now living it out has been a  challenging and sometimes frightening process, as it is for many. Whether a vocation is to holy orders, religious life, consecrated  life, or the married life doesn’t make this less true. Certainly, this is  because vocations have to do with giving your life away, all of it,  holding nothing back. It is frightening because answering a vocation  means committing yourself irrevocably and for life. There are no take backs so to speak. A vocation is a specific call from the Lord to respond in a particular way to His total gift of Himself to us in  Christ by the total gift of ourselves to Him. This is true for every  vocation. What I have sometimes forgotten during my journey is that God’s will is for my good and ultimately my eternal happiness by being with him forever in heaven. This is true for every vocation. A vocation is God’s plan for a person’s ultimate happiness and joy through eternal life in Him. Vocation is the road God sets a person  upon in order to lead them to Himself.

It is important to note that a vocation necessarily includes other  people in some way, shape, or fashion. (Even for those called to be  hermits.) This is because vocations are always the path of love and  every true act of love is an act of sacrifice in which we die to  ourselves a little so that another may have life through our  sacrifice; this demands there be another to love. Through vocations,  the Lord teaches us to live in communion by humbling ourselves in  order to exalt others. This kind of Love demanded by vocation  prepares us to be the kind of persons who will enjoy heaven. Heaven  is nothing other than a participation in the inner life to the Trinity  wherein the Father, the Son, and the Holy Spirit live in an eternal  exchange of love, in communion.

Even knowing this truth doesn’t make it easy to respond to God’s love  with our own love. There are very real obstacles such as sin and  fear. This has also been true for me in my own vocation. A little  over a year ago I was battling with the decision of whether to take  time off from seminary or to continue formation toward ordination. I  found myself paralyzed with fear and feelings of inadequacy. After  much inner turmoil and debate I found myself undecided until the  morning of my final evaluation at St. Mary’s Seminary. Just before the evaluation I spoke with a friend about my dilemma and his own  discernment. I remember in speaking with him how everything suddenly  became clear. I realized that I wasn’t in doubt about what my  vocation was but, rather, I was afraid to give my life away to Christ.  I was holding back out of fear that somehow God wouldn’t be enough  for me. Moreover, I had an acute case of what Bishop Fulton Sheen  called staurophopia or fear of the cross. I was afraid of what God  was asking of me, namely that He was asking everything of me. At that  moment I realized my fear was keeping me from God. Knowing the truth,  I was free to chose. Thanks be to God, He gave me the grace to  respond in love by following Him. Increasing Him, decreasing me.

Committing to a vocation is not a once and done kind of thing. A  vocation must be recommitted to daily both before and after making a  final commitment. My formation last year was dedicated to having the  freedom to make a complete gift of myself to God without holding back  because of fear or personal sin. An essential moment in this work  included making the 30 Exercises of St. Ignatius. Those 30 days helped  me to grow in friendship with Jesus and to trust Him as my friend  and Lord so that I might follow Him even to His cross. From then  until today, each day has included its struggles to recommit myself to  the Lord and place my heart and trust entirely in Him. My greatest  help in this ongoing effort has been the Blessed Mother who knows my need, intercedes for me before the Lord, and provides every virtue  where I am lacking. As the Mother of Jesus, she becomes the Mother of  every vocation leading each of us to her Son.

On that day I was ordained deacon, I became a little more of the person I am meant to be. I  was surrounded by my family, my friends, the people of the local  Church I am studying to serve, brother deacons, future brother priests, the angels, the saints, and my bishop. I was held up to the  Lord by their love and prayers but it was the Lord’s work in the Holy  Spirit which made that day great. As He does for each of us, on that  day He gave me myself so that I might give myself away and become  one of his deacons. By his work, I have been blessed in becoming a  little less so that He might become more in the hearts of men and  women. Please keep me in your continued prayers so I may continue to  commit my life to God day in and day out. God Bless! 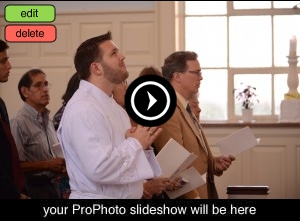 2 Replies to “On That Day: From Agnostic Theist to Seminarian to Deacon”