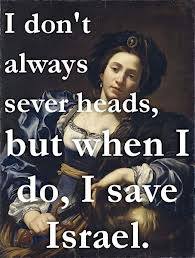 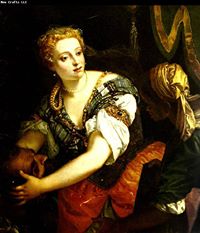 When the Old Testament’s Judith was eleven years old, I wonder if her mother ever wrung her hands over her strong-willed daughter. Ever wept at Judith’s stubborn streak or worried at her fierce anger. Did she yell her prayers to God and beg Him to soften her a bit? Did she hiss at her through clenched teeth to be loving to her siblings as God loves her? Did she have someone to point Judith toward the way I point my daughter toward Judith?

According to the Scriptures, Judith was incensed to learn that the Israelite leaders were poised to surrender to the Assyrians rather than die of thirst. Chapter eight reports that she called for them to visit her; they came (apparently she was also bossy); she delivered quite a tongue-lashing; she preached; and she informed them of her plan, which would “do something that will go down from generation to generation among the descendents of our race.” The leaders basically said, “Go and God bless.” 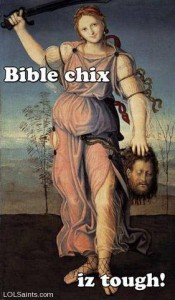 And what a plan it was: While bad-boy Holophernes thought he was seducing Judith, she was seducing him with her “festive garments and feminine adornments.” While she flirted and flattered and swirled her wine, he drank the wine, “more than he had ever drunk on one single day in his life.” When the guards slipped away with knowing winks, she slipped into his inner chamber, asked God for strength, cut off Holophernes’ head, and quickly tiptoed back to her town, where she presented the head to Uzziah with a flourish (at least, I picture my strong-willed daughter doing it with a flourish).

“No one had a bad word to say about her, for she was a very God-fearing woman (8:8).”It’s the God-fearing part that makes all the difference for a strong-willed woman ~ that sense of wonder at the greatness of God that can soften any prideful, angry edges and allow more patience and kindness to shine. Judith knew she was tough, smart, beautiful, and right; she was angry with Israel’s leaders and enemies, but she loved God and acted in His service, her way. A strong-willed woman was what was needed for this job.

“Let Your every creature serve You, for You spoke and they were made (15:14).”
My daughter’s strong will, like Judith’s, is good. She was made by God and she can serve Him her way (although I hope it never involves wine, men, and swords). My prayer as her mother is for the Holy Spirit to fill her with the fear of God. My job as her mother is to teach and model the fear of God, so I point her toward Judith. I imagine I will still wring my hands, weep, and worry, but knowing this lady’s story softens my stress. Thank God Judith is in the Bible.

3 Replies to “Thank God Judith is in the Bible”