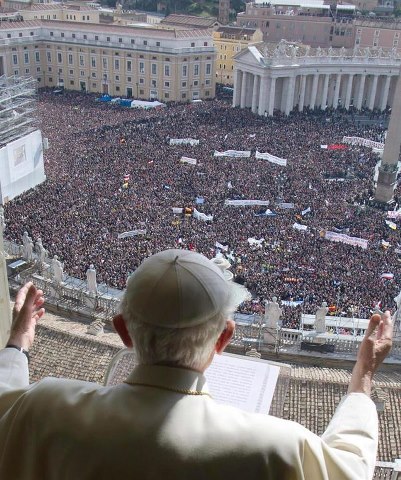 So, we’ve had 16 days to accustom ourselves to the retirement of Pope Benedict XVI, our 266th pope in the line of succession beginning with the Rock, St. Peter. By now most of us have shaken off the fog of shock and have taken a more resolute pose. As the leader of the world’s 1.2 Billion Catholics, however, Benedict’s unusual step has left us as quite the Papa-ratzi. News reports by the dozens appear hourly to feed our need to know. What will we call him, where is he going, and what about that all important Twitter account with its 1,582,730 followers? For that matter, what about those indulgences that we obtain for praying for the intentions of the Holy Father when we have no sitting Pope? In an effort to answer some of the questions that have caught my fancy, I will share some answers and their sources.

Q: Since this is an unprecedented occurrence in modern times, what in the world shall we call him when he leaves?

A: His Holiness, Benedict XVI, Bishop Emeritus of Rome will be his new title according to both Patheos and Zenit.

Q: What changes has he made to the rituals for new pope’s inauguration?

A: “One of the most visual changes, he said, would be the restoration of the public “act of obedience” in which each cardinal present at the pope’s inaugural Mass comes forward and offers his allegiance.”

A: According to his own words, “I, retired in prayer, will always be with you, and together we will move ahead with the Lord in certainty. The Lord is victorious.” After a brief stay at Castel Gandolfo, the Papal summer home, he will dedicate himself to a life of prayer and study in a Vatican-based monastery.

Q: But isn’t he abandoning the Church at a very tumultuous time?

A: No, Benedict is not abandoning the Church. Perhaps in anticipation of this question he clarified, “…this does not mean abandoning the Church,” he qualified. “Indeed, if God asks me this it is just so that I can continue to serve with the same dedication and the same love with which I have done so far, but in a way more suited to my age and for me.”

Q: What about the indulgences that are obtained by those who pray for the Intentions of the Holy Father when we have no sitting Pope?

A: Surprisingly, the answer is yes! According to a post by Fr. Zuhlsdorf, “The faithful are able to obtain plenary indulgences during the “Sede Vacante” time, where there is no Pope.As a matter of fact, the Church holds matters of internal forum and of indulgences to be so important for the faithful that the office of the Major Penitentiary (who oversees these matters for the Apostolic Penitentiary) is one of the few that does not cease when the Pope dies or resigns”.  Actually, this question was addressed after the death of Pope John Paul II after his death in 2005.

Q: Doesn’t this move us closer to the Prophecy of St. Malachy and his list, where he predicts that Benedict XVI’s successor will be the last pope? Are we to conclude that we are nearing the end?

A: There are strong indications that the List of St. Malachy is a fraud. According to Catholic Answers, “(t)he consensus among modern scholars is that it is a 16th-century forgery created for partisan political reasons”. We must remember that predictions of the end times were warned against in the Bible…“but of that day or hour no man knoweth, neither the angels in heaven, nor the Son, but the Father”.

Q: Will the conclave begin earlier, shortening the expected month long wait, and how many Cardinals will participate?

A: In his motu proprio Normas nonnullas (22 feb 2012), Pope Benedict has given authorization for the conclave to begin earlier. Sources at the National Catholic Register report that “the conclave to choose the next pope will likely begin between March 9 and 11”. We may have a new pope by Easter! This decision, however, now “falls squarely within the pontifical provisions for a conclave, and one may leave the choice of a start-date to the competent authority without further concern for the legality of the assembly” according to canonist Ed Peters.

There will be 118 Cardinals in the conclave.

Q: Will the virally popular Papal Twitter account, @pontifex, be shut down when the Holy Father steps down?

A: In a word, no. It will go dormant while we await the election of our new pope, however, as soon as he steps into his role as Vicar of Christ he will be free to take up what his predecessor started. It appears that Benedict chose the name “Pontifex”  wisely, in anticipation of a seamless transition from pope to pope. The name means “bridge builder” or “pope” .

This is but a small sampling of the questions that have arisen since Pope Benedict XVI made his announcement. Catholic Sistas (CS) is also involved in a Q & A endeavor over at Electing the Pope. Here you will find many more questions and answers, with sources, some of which are being provided by Ink Slingers. You will also able to post questions of your own. 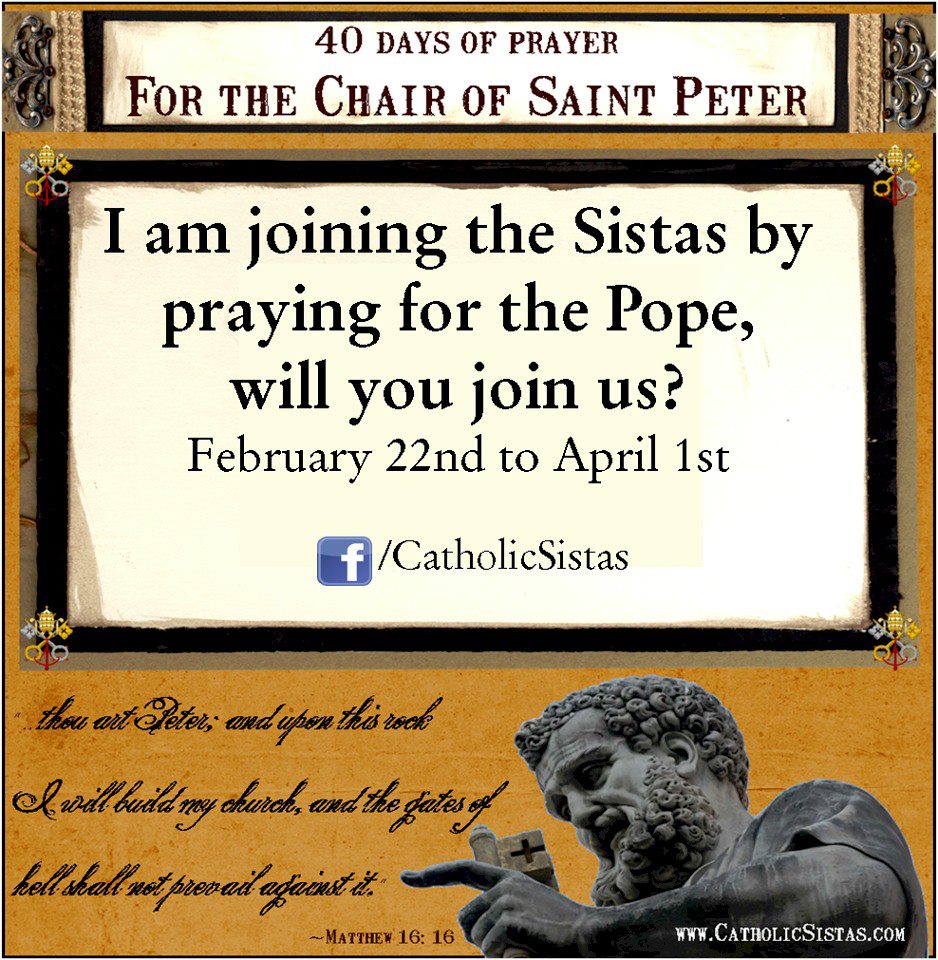 Don’t forget that CS also has their 40 Days of Prayer for the Seat of Saint Peter posted on our Facebook fan page. There we post a brief prayer every day – from February 22 (Feast of the Chair of Saint Peter) through April 1. Won’t you join us in praying for Pope Benedict XVI and his successor? You might also be interested in reading our Open Letter to Our Beloved Papa, where the Ink Slingers share their thoughts, prayers, and admiration of this wonderful pope who has given us so much in his eight years as our Pontiff.

May we never forget the good done by this gentle German Shepherd of ours!