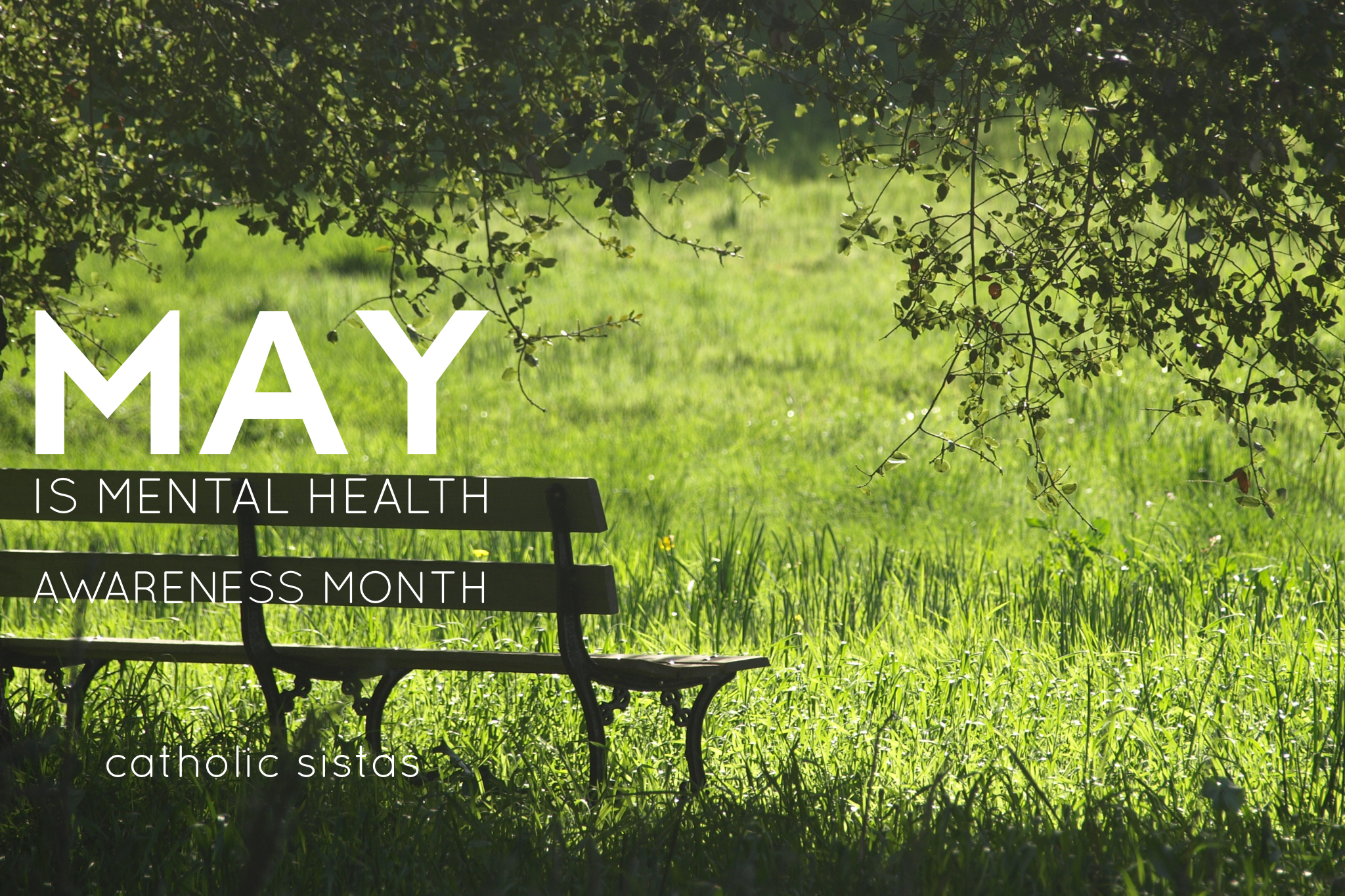 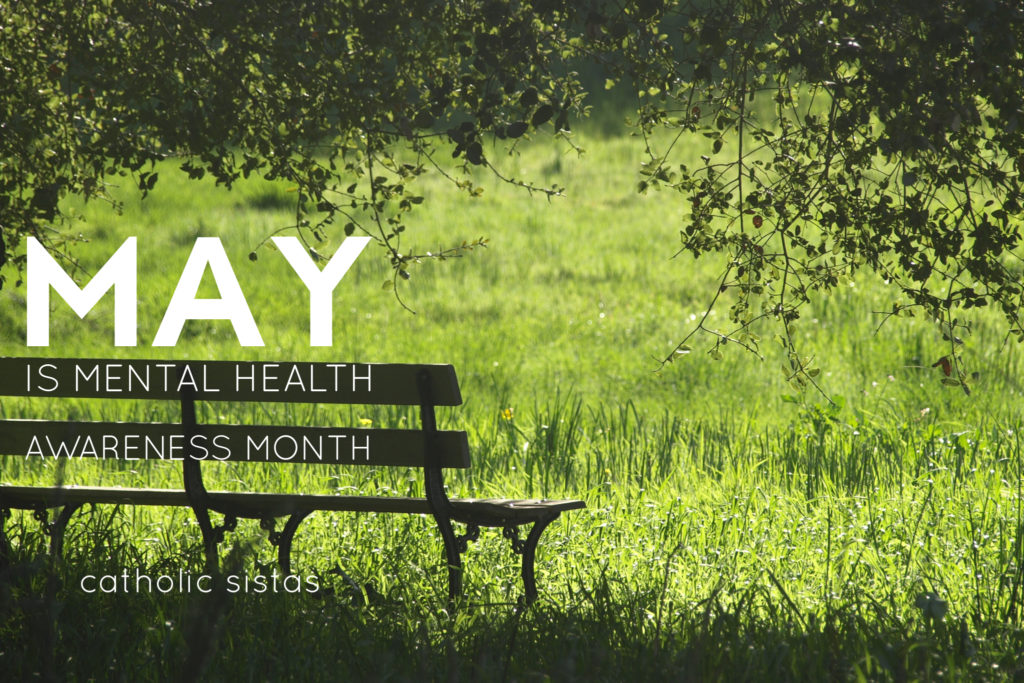 Mental illness has no boundaries, no preferences, and no qualifications.  You can be a person of strong belief or no belief, rich or poor, educated or illiterate, male or female, young or old, ______ or ______, and the list goes on.  However, what mental illness does have is a story – a story unique to every individual who experiences mental illness. I, too, have my own story to tell. Every year as Mental Health Month approaches, I feel an urgency in my heart, an urgency not without its own pain, which moves me to step beyond my own memories and fear of stigma.  In a world where so many suffer from mental illness in silence, I hope to be voice that can offer hope and healing.

My story is not unlike that of many who have suffered with mental illness.  It was the fall of 1998. I was happily married, had 3 daughters aged 8, 5, and 2, and was part of a loving extended family.  I was very active in a choir and a local homeschooling group. I frequently enjoyed the activities of a mothers’ group. I helped my husband with the office responsibilities of his business.  From the outside looking in, it appeared I was living an enviable life; that I had it all together. Nothing could have been further from the truth.
On the inside, I was a mess of mixed thoughts and emotions — endless worry and confusion — mixed with a constant wired-but-tired fatigue I couldn’t shake.  As is often the case in mental illness, symptoms, which can manifest themselves in a myriad of medical conditions, tend to be brushed aside until they become a glaring reality.  What I had considered for months to be just normal motherhood exhaustion and worry, was really the beginning of a slow, downward spiral, increasingly feeling I was boxed into a life of repetitive inner turmoil, negative self-talk, and emotional numbness.  I began to feel there was no way out of the vicious cycle I found myself in. My story could have ended there.

Tragically, for many, it does.  Thankfully, I had a cardiologist who saw beyond my heart related symptoms and initiated the right steps to make sure I received the help I needed.  I voluntarily checked into the local hospital’s Behavioral Health Center. Even though I was admitted to the “medical” side of the Center, it was still a locked ward with patients suffering numerous mental illnesses, mostly brought on by unintended medication interactions or old age.  The few days I was there brought on more fear and anxiety as I dealt with my surroundings and new medication. However, I was very relieved to have a diagnosis and a name to what I had been experiencing for the last year (clinical depression, which likely began with postpartum depression, along with anxiety/panic disorder) and a doctor who would help me with a recovery plan.  What I was not prepared for was seeing firsthand the extent of the suffering of the other patients. Many of the people I encountered had much more difficult hurdles to face. I began to see mental illness in a completely different light and to realized my perceptions of mental illness were in many ways misconstrued and prejudicial.

Mental illness affects 1 in 5 adults and approximately 20 percent of youth ages 13 to 18.  Suicide is the 10th leading cause of death in the U.S., the 3rd leading cause of death for people aged 10–24, and the 2nd leading cause of death for people aged 15–24.  Mood disorders, including major depression, dysthymic disorder and bipolar disorder, are the third most common cause of hospitalization in the U.S. for both youth and adults aged 18–44.   70% of youth in juvenile justice systems have at least one mental health condition and at least 20% live with a serious mental illness. An estimated 26% of homeless adults staying in shelters live with serious mental illness and an estimated 46% live with severe mental illness and/or substance use disorders.  See more at: https://www.nami.org/Learn-More/Mental-Health-By-the-Numbers
With statistics such as these, it is highly probable that mental illness will touch each of our lives in some fashion – personally or in the lives of those we know and love – and I encourage you to take action to learn the warning signs of mental illness.  You can find a comprehensive list on the National Alliance for Mental Illness (NAMI) website. Although medication and counseling was of benefit to me, what really allowed me to learn how to manage my illness was a self-help program called Recovery.

The mission of Recovery International is to “use the cognitive-behavioral, peer-to-peer, self-help training system developed in 1937 by Abraham Low, MD, to help individuals gain skills to lead more peaceful and productive lives.”  Recovery gave me the concrete tools I needed that allowed me to have control over my illness, rather than allowing it to control me. After attending the meetings for several years, I volunteered as a co-leader and am now the leader of a local group.  My years in Recovery, both as a participant and a leader, have given me an empathy and an understanding into mental illness that I would never have had if I had not experienced it myself. What I received through the program, I now hope to give back to others who are struggling with their own mental health battles.

The tools below are quoted or adapted from the self-help books Mental Health Through Will Training, Manage Your Fears Manage Your Anger, and Selections From Dr. Low’s Works.  They are just a few of the many tools available: