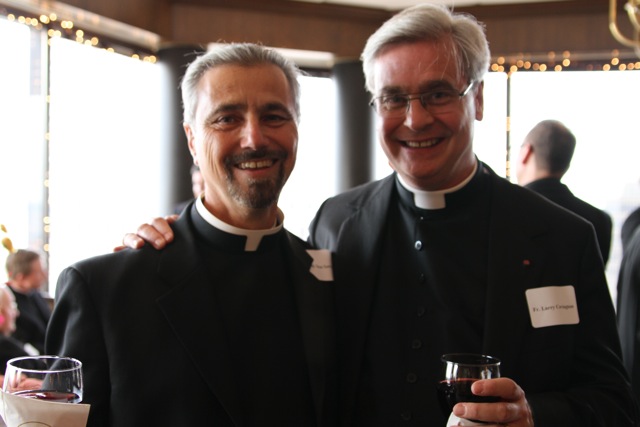 Austin, Texas, September 25, 2012 – What’s possibly more enjoyable than dinner with a friend who is a priest? Dinner with a roomful of priests!

Some newly-ordained, others pillars of the Austin Diocese pro-life movement for decades, 30 priests gathered at The Headliners Club in downtown Austin at a dinner on August 28 hosted by the John Paul II Life Center and Cook Walden Funeral Homes.

Some priests traveled as far away as College Station, Copperas Cove, Caldwell and Kingsland to attend the 2nd annual gathering honoring the Austin Diocese priests.

Dr. Jeremy Kalamarides, medical director of the Vitae Clinic, which provides obstetric and gynecological services to patients at the John Paul II Life Center, presented “Charting the Future: Stories of Hope.” He told of the spiritual and physical benefits and successes he’s witnessed through sharing the NaPro TECHNOLOGY method of natural family planning with women and couples.

JPII Life Center Co-Founders Tim and Pat Von Dohlen personally thanked the priests and toasted them for their commitment to sharing the benefits of natural family planning and promoting a culture of life.

“The priests of our Diocese give of themselves so generously in the service of Jesus Christ and their parishioners,” Mr. Von Dohlen said. “The JPII Life Center is pleased to give them a night to relax and have fellowship among themselves – it is the least we can do.”

Names were drawn for door prizes that included: a weekend of fishing; $500 cash for returning priests who brought a new attendee; $300 for priests attending for the first time; and UT football tickets.

Competition was fierce for a “History of the Diocese” game, created by Msgr. Michael Sis, Vicar General of the Austin Diocese, who also led the Benediction that evening. Priests had to match 20 parish names with the years they were founded.

Priests were given the book, “Physician Healed,” with the stories of 15 doctors who no longer prescribe contraceptives to their patients. The priests were asked to read it and share it with at least one doctor. They also received CDs featuring Cardinals, Bishops, Priests and Deacons from across the nation who have preached about the beauty of Natural Family Planning.

“All of us at Cook-Walden Funeral Homes and Cemeteries were so proud to assist the John Paul II Life Center in honoring and appreciating the Godly priests of the Austin Diocese,” said John Onstott, president of Cook-Walden Funeral Home. “It was enjoyable spending the evening with priests, who are on the front lines of preserving God’s creations and are to be honored and thanked for their calling as humble servants of our Lord.”

The John Paul II Life Center’s mission is to build a Culture of Life in Central Texas. Inspired by Blessed John Paul II’s teaching on the sanctity of life, the center serves women and families of all faiths and backgrounds.

Their three-fold mission is: