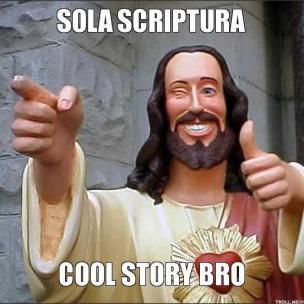 In a popular apologetics book written by one Catholic Sistas’ guest contributors Devin Rose, entitled If Protestantism Is True, an approach is taken to addressing the contrast between Catholic and Protestant ideals by assuming that Protestantism is true and attempting to make sense of Church history and theology based on that assumption. Being that Sola Scriptura is one of my favorite apologetics topics, I often find myself speculating on the issue and the logic behind the line of thinking that states the Word of God is strictly present in the written form, and therefore the Scriptures are our sole source authority.  For this post, I decided to adopt the approach of Devin Rose, assuming that Sola Scriptura is true and how that would have changed the course of salvation history, Jesus’ ministry, and even the Sacred Scriptures themselves.

If Sola Scriptura Is True…

…Jesus would not have spent the entirety of his ministry orally teaching the faith to the apostles. If God willed for His Word to be present solely through inspired writings, He would have spent His ministry writing down all of His Teachings in the form of letters, perhaps similar to the format St. Paul used in his many letters.

Jesus then would have taken His completed set of writings—already compiled in a Book because there would be no authoritative, Holy Spirit guided Church to do so for Him—and presented it to His apostles prior to His ascension. He might have said, “You are Peter, and to this rock I give this Book…” (rather than, “You are Peter, and on this rock I build my Church). He then would have instructed Peter, along with His other apostles, to go forth and “make disciples, reading to them this book and Teaching them to do all that I have written within” (rather than “Teaching them to do all that I [orally] commanded you”).

It stands to reason that Jesus would do these things, because if Sola Scriptura is true, then God’s Word will only ever be preserved in the written form—we will not have had any other source of authority in which we can rely for Truth. Jesus, therefore, would not have ascended into Heaven leaving His followers to spend over three-hundred years waiting on their authoritative source. He would not have left Earth before leaving His people with something to sit in His seat and be His authority on Earth; since this authority will not be a Church, according to Sola Scriptura, then He would have left His book at some point before His departure.

History, however, confirms the opposite: for the first one-hundred years of Christianity there were no written accounts of Christ’s Teachings, as they were at this time in the process of being written. For the first three-hundred years (until the councils of Hippo and Carthrage) there was not a compiled collection of inspired Christian writings that were publicly known and recognized as the New Testament. Therefore, if Sola Scriptura is true, then our God is a God of disorder. He established a system in which His authority would be found only through written inspiration, leaving nearly twelve generations to attempt to worship and follow Christ without a final, authoritative source of Christian Truth.

God could further be classified as a God of chaos, confusion, and disorder, if sola scriptura is true, because there would be no accompanying, authoritative voice (such as a divinely guided Church, a central Teaching office) to infallibly interpret these writings. Christians who lived several centuries and even a millennia after Christ and the apostles would then have to read these writings and draw their own conclusions. Several different people, all feeling guided by the Holy Spirit in their convictions, would come to contradictory interpretations of the Scriptures. Those who were illiterate, a large group that encompasses most of our human history, would be forced to choose which man’s interpretation to follow. As a result, multiple Christian theologies would exist in complete disunion with one another. There would be no refuge of unity within the Body of Christ, as there would be no additional source of divinely guided authority to settle these disputes.

If Sola Scriptura is true, then the Bible would make it clear. All passages referring to the “Word of God” would not describe Jesus as the Word made flesh (John 1:14) or teachings that were “received” or “heard”. The “Word of God” in the Scriptures would be a phrase always accompanied by the words “written”, “read”, or “book”. In passages regarding the Scriptures infallibility and authoritative purposes, the word “alone” would be included to emphasize that the Scriptures alone are infallible and they alone hold the authority, the only pillar and foundation of truth. In reality, the Scriptures say or imply none of the aforementioned.  Therefore, if sola scriptura is true, then it fails by its own standards.

So then, brothers, stand firm and hold to the teachings we passed on to you, whether by word of mouth or by letter. –I Thessalonians 2:15

11 Replies to “If Sola Scriptura Is True”