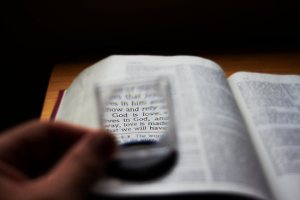 So right before my life in Amarillo crashed and burned 5 1/2 years ago I read this book called “He’s Just not that Into You” and it really was a good book but I didn’t really get how to change. Now as I sit here watching the movie I realize that I’ve changed all those things about me that attracted the kind of men who wanted to use me and ended being  married to a man who loves me. I found all the answers in the writings of the Saints of the Catholic Church, especially Pope John Paul II’s Theology of the Body. It’s so sad that so many people are walking around seeking love while rejecting God, or accept the little god who doesn’t expect anything but you to believe he exists, but not the God who IS Love who wants us to make the changes with His help that makes us perfect as He in Heaven is perfect. That is what Jesus told us. I don’t know why He made such a dramatic entrance in my life, but I do know that it took me giving Him everything in my life. I had to give up control.

Control comes from fear. Every place in our life that we insist on controlling is because we fear something. Birth control; we fear babies, and really if you really get down to the root problem of people who use it the fear is of self-sacrifice. Just pay attention to the words that we say: We can’t afford another baby. Babies are expensive. Yada yada yada. All of it comes down to “We don’t want to live in a small 3 bedroom house with 7 kids and crappy cars. Sometimes we can really justify it by saying that we are considering the “best” for the kids we bring into the world, but do our kids need the “best”? Or do they just need the essentials and isn’t it true that Jesus told us that if we have faith that God will provide all those things?  Kids don’t “need” game systems, or cable or even dance lessons. Plenty of people since the beginning of time have all survived not having those things. And while I’m at it, I’ll say that this is where the “contraceptive mentality” comes from. So, when I’m not rolling my eyes at the things that pro-aborts and pro-contraception people are saying, I’m rolling my eyes at the NFPers who hate the words “contraceptive mentality”  are saying. I’ve heard the word “Providentialist” thrown around like some insult. If by “Providentialist” you mean that some people think that God is smarter than them and more capable than them to provide what they need, then I don’t really see that as a bad thing. In fact, I think that He calls us all to that kind of faith. I have nothing but respect for people who use NFP, but I also have respect for people who don’t. I do not think one set is better than the other. We are all in the same boat of trying to live our faith as best we can, and we ALL have issues that need conversion. Conversion is a life long process.

There are so many other areas where we control out of fear. Gun control, health control, and many others. Yes, we should do our best to have a civil society and to be healthy, but when we care more about all of that than God, then we have put it in a place that it does not belong. It is a balance of what we do and what we accept that God does. That is the key to the Christian life, and it is not easy.

There is a great temptation to use others also. Or to throw others under a bus when it means that we will suffer. Fear of suffering. That is another great fear isn’t it? The talk about the fiscal cliff where everyone is trying to throw those they consider “rich” under the bus so that the rest of us don’t suffer. The Utilitarian philosophy is running rampant all around us. How can we use others to make us happy which means no suffering? That is what people think happiness is; not suffering. That isn’t the example that Jesus gave us. He suffered so that we could LIVE. Eternity with Him in Heaven is really happiness.

Back to my point about this movie. It’s stupid. The idea that men only get married because they are forced to, is such BS. Maybe in the secular world that is true, but if it is it is because people don’t really understand what marriage is anymore. Love has no place in marriage anymore, that is why people can “go their separate ways”  when things don’t work out. And the reason is because we want to control our happiness. So when the butterflies go away, because they always do in a relationship that is maturing, we think we aren’t “happy” and we can’t have that. Happy highs, that is what everyone is after in the secular world. If we aren’t “happy” then we have to MAKE ourselves “happy”.  Nobody ever stops to ask “What is happiness?”.  All the people who I know that have asked that question and have truly sought the truth about the answer to that question has ended up at the foot of the Cross of Jesus. Because Jesus is that into us.

In the end, that is the key to happiness: Jesus. Jesus is the key to everything. He came down from Heaven and became a Baby in the womb of Mary, and born in a manger for you. Why? Because He loves you. He created you. He wants to be in a relationship with you. He died to saved you. But He will never impose Himself on you. He will always wait for an invitation. I handed Him my life and I have never looked back. (Well I have a few times when I thought maybe I wasn’t really happy and had to take back my life to be happy, but that didn’t work and I turned back to Him. That is another blog post. LOL) Jesus is my Beloved, He is my friend, and my God. And because of that; I am finally happy.