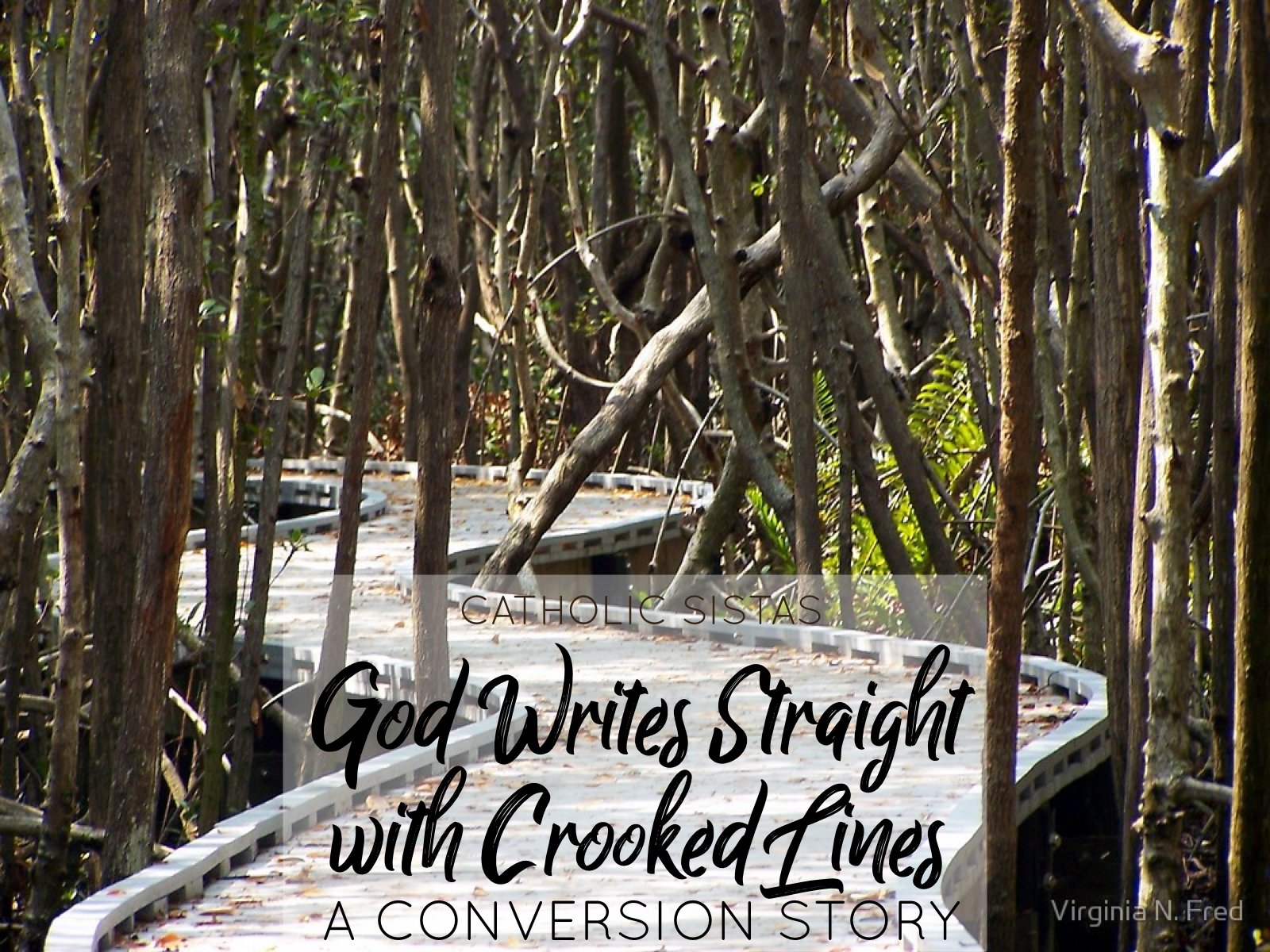 So there I was, crammed into a tiny Boeing 737 bathroom whilst trying to pee into very small Dixie cup. I was flying to Alabama and due to the early morning flight, needed to check my fertility on the Clear Blue monitor I use for the Marquette Method of Family Planning. Despite the turbulence of the Rockies, I successfully avoided urinating all over myself. Win! During this debacle I started laughing out loud to myself. Seriously, how many Catholics–or women just desperate to get pregnant–have checked their LH levels at 35,000 feet?

How did I get to this point in my life, especially when I am not even Catholic? Like many conversion stories, it’s a long one. I wanted this first blog post to be my introduction. I am a real person, just like you. I struggle. I juggle being a wife to a military man, and having three jobs. I feel guilty I do not spend enough time with my six-, two-, and one-year-old. I eat off the floor most days of the week, sadly content to eat the scraps of my disgruntled toddlers. I lament I do not set enough time aside for God. I have phases where I am all over our Lord Jesus, followed by dry spells where I just keep praying for the rains of passion to come back. The struggle is real.

Perhaps because of my struggles, I have had this unquenchable drive for the truth. Ironically, Jesus said in John 8:32 that “the truth shall set you free.” I searched for the truth during my Protestant upbringing, never fully satisfied. At 18, my heart was ripped from my chest when my little non-denominational church split over an argument of whether baptism should constitute full immersion in water or just a few drops sprinkled on the head. The church voted to fire the pastor that I had grown to love like a father. Sixty of 120 people left the church. I sobbed and sobbed. There must be something better. God could not have wanted His Church to be this way.

I was early on in my military career and had the benefit of free education. I took a religion class and thoughtfully researched the top five religions. I never wavered from Christianity, but I wanted to be open-minded and hear out the others. The falseness of the other religions, especially Islam, seemed evident to me. I felt at peace knowing that Jesus Christ is the Way, the Truth, and the Life.

While learning more about Christianity, however, I discovered that all roads led to the Catholic Church. Odd, I thought. Growing up, I had been taught that Catholics were going to hell for blasphemy. They worship the anti-Christ (Pope), Mary, so-called Saints, and had idols in their sanctuaries. Worse yet, Catholics believe they are eating the flesh of Christ, like some weird, perverted cannibal. Catholics are sadly mistaken people who believe Jesus never got off the cross, which is why he is still on the Crucifix. In short, to be Catholic was to be an unbeliever.

It was exactly the time I was transitioning off of active duty service that I had a come-to-Jesus meeting. I invited Jesus. I was in the Bible Belt deep in South Carolina, parked at a Red Lobster. I said a prayer to God asking for a sign that Catholicism was the right denomination for me. I closed my car door and walked into the restaurant. After the hostess ushered me to my table, I sat down and glanced at the table. Next to the salt and pepper shakers was a genuine, Italian made medallion of Saint Christopher. Let me re-iterate. I was deep in the Protestant Bible Belt and had never seen a Catholic church in the five years I had lived there. I picked up that medallion and cried. I have that medallion on my key chain to this day.

Change doesn’t come easy though, does it? I wanted proof. I wanted someone to refute all of those Catholic misnomers that Protestants indoctrinate their children with. I signed up for RCIA a year later, but no one ever called me. I signed up a second time. No one called me. I began to get discouraged and irritated that Catholics seemed so lackadaisical about gaining followers for Christ. Many Catholics seemed content to just go through the motions and bolt like a Kentucky Derby champion out of the pews after mass. I turned to Catholic radio for answers and for three years worked out doctrinal and theological issues in my head.

The olive branch to the Catholic faith came from an unusual source: Mary. If you have ever been Protestant, you know what a hang-up those Christians have with Mary being the Mother of God, Immaculately Conceived, and Ever-Virgin. But God used my first pregnancy to connect me to Mary, as both of us had very long journeys during our ninth month of pregnancy. She was the gateway. My heart started to accept Catholicism more and more. I started RCIA two more times, successfully finishing the course in 2014. This part of the journey took 10 years.

I am currently in limbo now. Terrible life choices in our 20s led my husband and me to marry different people. My annulment was granted in 2016; my husband’s is still ongoing. There is the possibility he had a valid Catholic marriage. Looking at the Catechism, it is pretty clear we are living in sin because our legal marriage was not blessed by a priest—it couldn’t be.

But guess what? Jesus came to forgive me. I have faith that whatever the annulment outcome, I can remain Catholic in my heart. I will work on purifying myself every day in some small way. For example, at Mass I go up and receive a blessing from the priest. I have had all our girls baptized. I even spent five sessions having the priest perform soul-tie cutting of every unhealthy sexual relationship I have had.

We should all strive to be Saints, and sometimes the journey there is not pretty, as you can see by this post. But do not give up. Keep fighting through your struggles. Pray. Ask God for signs and listen quietly for answers. But more than anything, believe. God is real. God loves you and He is coming back for you.

One Reply to “God Writes Straight with Crooked Lines: A Conversion Story”