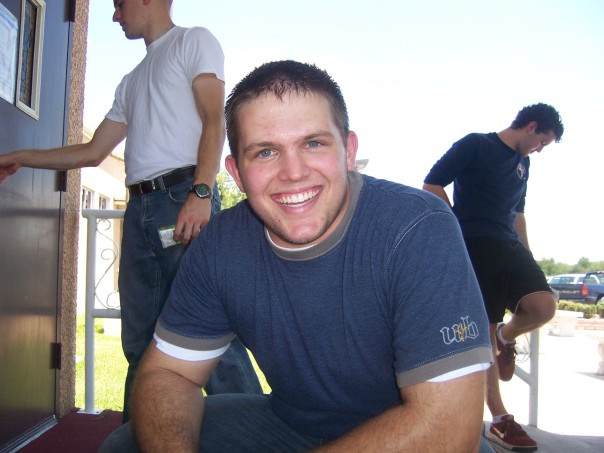 Catholic Sistas welcomes the third installment of seminarian Craig DeYoung’s beautiful conversion story. You can read the second part of Craig’s story here. Please check back soon for the fourth and final installment in this inspiring series.

In Part II of my conversion story, I wrote about how my life was simply blah. God was present and working in me, but I couldn’t see him very well. I didn’t think him very important, nor did I think of him much at all. I believed there was a God, but not a particular sort of God. But I deeply longed to be loved and to love. In college, he revealed himself to me as the God who loves me in a scandalously particular way!

It’s hard to write a story when so much of it is a mystery even to the one who lived it. So much of God’s work in my life is still hidden to me. I see the harvest of much labor, but can only marvel at the growth of my soul.

It was a special providence that brought me to Texas A&M University to begin my college studies. Texas A&M began in 1876 as a land grant college, and was a military academy until many years later. It retains many traditions from those days and the heart of the school is still the traditions upheld by the Corp of Cadets from its ROTC program. Over the years, it has remained a conservative school and the practice of religion is more common than not. I’d estimate 80% of the student population is Christian, with 25% of those being Catholic. The Catholic center of the university is the very active St. Mary’s Catholic Student Center.

Being in the top 10% of my high school graduating class, I was automatically accepted to any public university in Texas. I didn’t particularly want to attend A&M, but chose it after visiting the university twice. I knew hardly anything about the school until I attended “fish camp,” a camp for incoming freshmen designed to teach students about university traditions and help them make new friends. The camp is often referred to jokingly as a brainwashing session. It was at fish camp that I met my first college friends, and developed a crush on a camp counselor named Becky.

Becky was a beautiful young woman, full of energy and joy. All of which was attractive to a young man who longed for both. She was also a devout Baptist and truly in love with Jesus. Our Lord was the center of everything for her. It was, perhaps, my first glimpse of the joy that having a relationship with Jesus can bring.

When I told another counselor I liked Becky, she told me I would have to be more in love with Jesus than Becky was for her to want to date me. So when Becky invited a group of freshmen to attend church with her one Sunday, I went. The most vivid memory I have of going to church that day was being very uncomfortable at the service.

As Becky dropped us off back on campus, she invited me to attend another event and I immediately said yes. I didn’t know what the event was, nor did I really care. All I cared about was that Becky had invited me.

When I showed up it turned out to be a Baptist Bible study for freshmen called Upstream. As soon as I showed up, I saw Becky, who introduced me to her boyfriend, Casey, and then left. Needless to say, I was less than thrilled to find out I was at a Bible study, that Becky had a boyfriend, and that she wasn’t even going to attend. Casey, to my disappointment, turned out to be a good guy.

As we were talking Casey introduced me to another guy named Jason. By now I was biding my time and looking for an opportune moment to slip out unnoticed. So when praise and worship began and Casey went in, I thought I’d have my opportunity to leave. Jason, however, stayed and kept talking to me. It must have been apparent how uncomfortable I was, because he asked if I wanted to sit and talk outside. It’s funny how such a small moment can change everything.

I began attending every week and to my surprise, looked forward to it as the best part of my week. At first it was because of the friendships; I simply enjoyed being with Jason and the others. As we studied the letter of St. Paul to the Ephesians, I realized I had something to offer the group: questions…I was full of them! Many of my questions remained unanswered and that challenged the group to go deeper. In studying Scripture with my Upstream group, I felt valued and loved. I felt closer to truth and it felt great.

As it turned out, Jason was a Catholic but was co-leading one of the Upstream groups. He saw it as giving back to Upstream, which had been influential in his life. As a leader of a Baptist Bible study group, he was not allowed to explicitly teach the Catholic faith. What he did do was love me, affirm me, and build me up in my quest for truth. He also invited me to my first Catholic Mass.

At the time, I was still unconvinced of the truth of Christianity and was attending different services on weekends more out of curiosity and loneliness than any sort of religious devotion. I went to my first Mass alone; I didn’t go with Jason but just sort of showed up. I was very lost and had no clue what was going on. I did, however, remember my time in the Episcopal Church and went up to receive Communion. In my ignorance, I received my first Communion. After I received and was walking back to my pew something told me I shouldn’t have received and without knowing why, I never went up again except for a blessing.

Except for that prick of conscience after Communion, there was nothing remarkable about my first Mass. I remember thinking the priest seemed kind of fake, though this turned out to be far from the truth. After Mass, I saw Jason and he invited me to the parish’s Sunday Catechism classes and I began attending sporadically.

Not long after, Jason invited me to a Catholic student retreat called Aggie Awakening. This retreat turned out to be the single most influential event in my conversion. It was on this retreat that I realized Christianity was real. The love present at this retreat was tangible. God was active and working in the world. Jesus was not just 2,000-year old history, but was present in the here and now; I saw him working in and through all those who led and staffed the retreat.

I left the retreat convinced Christianity was true. I wanted to be Christian, but I wasn’t going to do it halfheartedly or blindly. But even then, I wanted to know what I was committing myself to, so I began to explore what seemed to me to be different kinds of Christianity. I went to the Lutheran church, the Baptist church, and others searching for the truth. After a while, I was attending only the Catholic Church, involved in many of the ministries, and was going to Mass every day.

It was then that Christ became my friend. He was no longer a stranger, but someone I longed to be with all the time. Life was no longer blah but exciting! I was changing and becoming more of who I was meant to be, a child of God.

I constantly found myself on the same page with the teachings of the Church, though there were still some things about which I remained unconvinced. It was a long while before I would pray the Hail Mary, for example. Once when I was praying with a group and I didn’t pray it along with the others, some of the girls asked me why. They were surprised to learn I wasn’t Catholic since I was always at St. Mary’s..

The priests at St. Mary’s made a huge impact on my life, too. They taught and proposed the faith through their examples and homilies. Monsignor Mike Sis was especially influential in my spiritual life and became my hero. But it was during prayer at Mass that I found real peace.

At the beginning of my second year at A&M, I began RCIA to continue learning about Catholicism. Even then, I didn’t intend to enter the Church. That changed after I came back from staffing an Awakening retreat while attending Mass one Sunday. At this Mass, there were baptisms, professions of faith, first Communions, and Confirmations. I remember watching and saying to myself, “I want that!” I went home at Thanksgiving and told my mom, “I’m becoming Catholic, I’m changing majors, and I might be dating a girl.” Her response was, “What’s her name?”

I asked Jason to be my sponsor and during Lent made my first Confession, which took an hour…poor Monsignor Mike! I chose St. Jude, the patron saint of lost and impossible causes, to be my confirmation saint and I entered the Church at the Easter Vigil Mass in 2004. It was the happiest day of my life and my jaw was sore the next day from grinning so much. Right after the profession of faith, I turned to all my RCIA classmates with a cheesy smile on my face and said, “Guess what…we’re Catholic!”

I had come joyfully home to the Catholic Church! For the first time in a long time, I felt like I had a home. The sacraments, by which Christ is present in a special way to his Church, became my life. From that time, things only became better, thought they have never become easier.

In the fourth and final part of my story, I’ll share how God called me to the seminary to become a Catholic priest. Thanks for reading!

8 Replies to “From Agnostic Theist to Seminarian: Part 3”