Unlike most Catholics, who have “normal” devotions such as venerating the saints, the Blessed Virgin, or even Our Lord’s Sacred Heart, my spiritual north star is probably one of the least popular: I’m devoted to the Holy Souls in purgatory. My first few years after converting, I believed in purgatory all right, but it wasn’t until I read Purgatory Explained by Father F.X. Schouppe that I really “got” what it means to be purified of all stain of sin after death.

I still remember the night I was about halfway through the book. Suddenly, the enormity of my sins hit me and I fell to my knees. I sobbed there for almost an hour. Sadly, not for a holy reason, such as being sorry I’d offended Jesus, but because I realized I was so rotten I’d be spending most of eternity in purgatory and that literally scared the hell out of me. (Which may have been the author’s point.) The terror only abated after the priest assured readers we would experience profound peace in the midst of our sufferings there, because our wills are finally perfectly aligned with God’s.

Once I realized that God would accept my meager earthly sufferings as payment for these souls’ enormous debts, I was hooked. Every bit of suffering and sacrifice from then on became an opportunity to usher someone into heaven. It was a heady thought that I, a mere stay-at-home Catholic mom, could assist such worldly heavyweights such as Christopher Hitchins, Liz Taylor, and Steve Jobs out of purgatory. It was like having a hidden superpower and yeah, I may have gotten a little drunk on it.

And like all drunks, I occasionally lost my good judgment and assumed crosses Jesus never intended for me, mostly through pride. The best thing about God, though, is that He can transform even our sinful actions into goodness: which is why He once allowed me to do something so idiotic and unnecessarily painful that it certainly released several hundred serial killers from purgatory.

A few weeks after we moved to Alaska, a new friend from the parish mentioned she was a “winter runner.” “Come with me,” she said, magnanimously ignoring the layers of fat and atrophied muscles peeking from under my clothes. She painted a Bob Ross picture in my head, complete with happy little snow-covered trees that shimmered like diamonds in the brilliant Alaskan sun. Well, why not? I’d run for 10 minutes on a treadmill once back in college and surely running in 15 below zero for an hour couldn’t be THAT different.

The next morning, I got up early and drove to her house. The first clue I was out of my league came when I saw what she was wearing: just your typical runner’s spandex, with a light jacket and ear coverings. I, on the other hand, was wearing so many layers I looked like a tick about to pop: 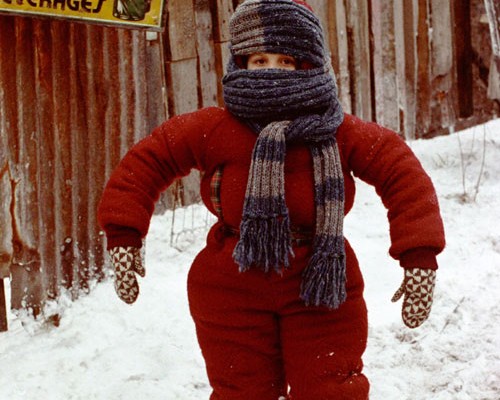 We put on our Yaktrax (springs you wrap around your shoes to keep from sliding over the ice) and she led us out of the neighborhood. The driveway seemed longer than I remembered, and before we were even on the main road, I was suffering. I mean, “Doing penance because you killed a busload of Mother Angelica’s nuns” kind of suffering. You imagine serious cold and you think, “numbing,” right? And it will…eventually. But first, the skin starts stinging. You try looking casual when it feels like wolves are eating your face off.

On the main road, my running partner informed me we were going to “step it up a notch” and actually run. Which alarmed me, since I thought that’s what I’d been doing. Initially, the hardest part was simply trying to breathe; taking in air that cold feels like a knife going into your chest. But it didn’t seem to bother my new friend, so I plodded on. She was chattering like a magpie, but I couldn’t hear a thing she said over the sound of my own ragged breath and hammering heart.

We crossed a road and got onto a bike trail. This was where it got scary. If you’ve ever run on a beach, you know that the give of the sand forces you to exert more effort to push off each step. It’s the same with snow. We’d gotten an extra inch or two over the past few days, so the path was extra slushy and uneven. I’d been running for 10 minutes when I realized my face was no longer freezing. I was pretty darn warm, in fact. But with each passing minute I could feel my energy pouring out like a sieve. We hadn’t even covered the first mile and I was on the verge of my heart valves just blowing apart into a dozen pieces right there in my chest. I was sure I could hear the sound of the souls literally popping out of purgatory thanks to me.

I finally slowed to a brisk walk, because I feared I’d be vomiting on the side of the road if I didn’t. The problem with slowing down is, the cold begins to creep in. Pretty soon, my choice became clear: I could freeze to death or die from a heart attack. Either way, I was a goner. I mentally berated myself for not going to Confession the week before. And for not bringing holy oil so someone could anoint me when I finally collapsed and died on the side of the road.

We turned around at a school about a mile and a half from her house. I was stoically trying to keep up the show, but privately nursed fears about how my husband was going to raise four kids on his own. Does he know where the wills are? Can he afford a Catholic Mary Poppins on my life insurance money? Would running in Alaska in February be considered “suicide” and void our policy?

I kept up a brisk walk with short, intermittent bursts of jogging to stave off the cold. I wasn’t too cold, but despite wearing thick wool socks and tennis shoes, my toes were stinging. I started swinging my arms and lifting my feet as high as I could, slamming them down on the snow to warm them up. I looked like a KKK member practicing her goosestepping for next spring’s rally.

We were on a long, clear stretch of road and I could see the street sign where we’d be turning back into her neighborhood. In reality, it couldn’t have been more than half mile away but that was the longest 2,600 feet of my life. After a few moments, I just put my head down and concentrated on putting one foot in front of the other; I couldn’t bear the psychological torture of looking up and seeing that sign so far away again. At one point I seriously contemplated just flopping down in the snow, curling up into the fetal position, and telling her to go get the car for me. But I’d already bragged on Facebook about running in 15 below and the shame of not finishing fueled those final agonizing moments until we got back to her house.

As I hobbled back to my car, I remembered something important: I hate running. Then I thought about all the atheists, murderers, and celebrities I’d just got into heaven. And I thanked God He can write straight with crooked lines.

4 Replies to “Friends in High Places”