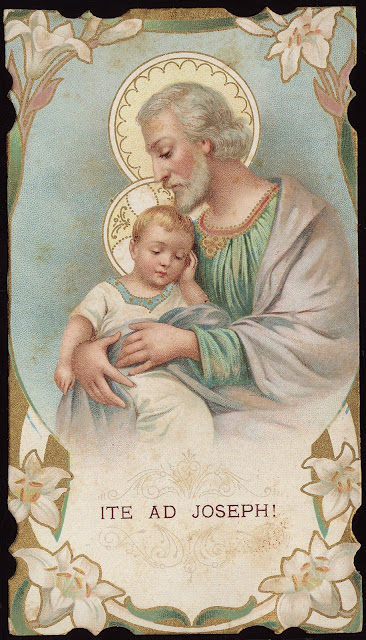 O Saint Joseph, whose protection is so great, so strong, so prompt before the throne of God, I place in
you all my interests and desires.
O Saint Joseph, do assist me by your powerful intercession and obtain for me from your Divine
Son all spiritual blessings through Jesus Christ, Our Lord; so that having engaged herebelow your
heavenly power, I may offer my thanksgiving and homage to the most loving of Fathers.
O Saint Joseph, I never weary contemplating you and Jesus asleep in your arms; I dare not approach while He reposesnear your heart.  Press Him in my name and kiss His fine head for me, and ask Him to return the Kiss when I draw my dying breath. Amen.

Ite Ad Joseph was written in gold above the St. Joseph’s altar in our parish and for many months the words above were my near daily prayer.   Novena after novena for countless intentions.  First I sought work while my husband finished grad school, then we prayed anxiously for the return of my fertility which had inexplicably disappeared after our daughter died, for strength as my husband and I spent four and a half months apart while he completed training for the Air National Guard, and finally for him to find a job that would put his years of schooling to good use.

In all counts, St. Joseph came through.  I had temp jobs to hold me over until I was offered a position that paid well enough for us to set money aside to pay off school loans while my husband was still a student, we made it through that long separation, my husband was offered a job that suits him to a T, and best of all we’re expecting! 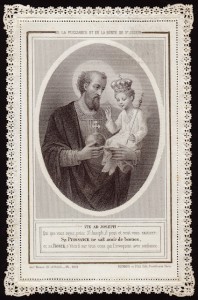 St. Joseph is not spoken about often and we hear very little of him in the Bible.  What we do hear shows us how honourable he was and how fully he allowed God to govern his life.   We first encounter Joseph shortly after the Incarnation when he learned of Mary’s pregnancy.  He would have wondered how this could have happened.  He knew Mary was a good and holy woman but inexplicably here she was, pregnant and unmarried.   He decided to put her aside quietly.  He is then visited by an angel and learns the nature of Mary’s pregnancy.  Once Joseph knew that all was right with God he was prepared to care and provide for Mary and Jesus.

We know that Joseph took the responsibility of caring for them very seriously.  When Herod was preparing to massacre the Holy Innocents, Joseph was again visited by an Angel who informed him of the danger and instructed him to flee to Egypt.  The flight to Egypt would’ve been long and arduous and Joseph would have needed to reestablish his carpentry trade in a new location in an area where he did not know the language, customs or anything other than this is where God wanted him.

When the danger had passed, it was again to Joseph that the Angel appeared.  Though Mary and Jesus were more perfect, he was the one God had put in charge.  He was the head of the household. 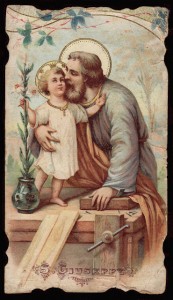 St. Joseph is the patron on many things, Carpenters (obviously), Canada (and as such dear to this Canadian girl’s heart), and A Happy Death since he died in the arms of Mary and Jesus.  Most importantly he is the Patron of the Universal Church.  After all, who better to protect the Church than he who protected Mary and Jesus on earth?

One Reply to “Ite ad Joseph – Go to Joseph”