Less than 12 hours after the ruling of the Supreme Court of the United States (SCOTUS) on ObamaCare, my Facebook wall took a drastic turn. My wall is normally covered with images of Jesus, our Blessed Mother, saints, or my own little saints in the making, but I made the mistake that day of checking my newsfeed. I nearly hurled my lunch when I saw, “Yay, Obamacare passed, this is the happiest day of my life!” from one of my cousins. For once in my life, I felt like smashing the computer.

Instead, I turned to prayer. “Lord, what is happening? Why would my family of refugees from a socialized nation be happy about this?” Then I saw an image of my father in his military uniform. And a wound that has never fully healed, the death of my father, was being opened again by my own relatives. Reality hit like a ton of bricks…a hundred images flashed before me from the fall of 1979, including the last time I kissed my Papi goodbye. Then I saw another status with a similar message and my eyes went blurry.

My father’s family being happy about the SCOTUS decision was surreal for me and I didn’t understand it. I walked away from my computer and sat looking at my beautiful open backyard. Freedom. Living in the mountains gives me a sense of both protection and freedom, but it wasn’t helping me forget what I was feeling. Worse, the mountains even further reminded me of my Papi, who fought in the mountains of Nicaragua against the Sandinistas for many years. One of the highest ranked commanders in Somoza’s army, my father fought for my freedom while we missed him at home. Military families understand the sacrifice of seeing your loved one go off to war.

I am an unhyphenated American who was born in Nicaragua when it was free of socialism/Communism. My dad was assassinated and left to rot in an abandoned house under the Sandinistas. My mother, at the ripe age of 25, had to fly to another Central American country to identify his remains.

Life without my father was hell for my mother, my sisters, and myself. We left Nicaragua with a suitcase, all of us thinking it was a temporary departure, not a permanent one. We left behind our home and business, both of which my parents had worked so hard for. Eventually, the government managed to carry out its socialist principles to their logical conclusion: it took ownership of all our property and redistributed it. Our home was confiscated and up until a few years ago, was used as the consulate for an African country.

After burying my father, my mother returned to the United States and we lived in fear, hiding for almost two years. Would they come after us, too? We never knew.

And guess what? Things haven’t changed; even after an “open election,” Ortega is back in power! So how is it that my Nicaraguan family members, along with our Cuban and Venezuelan friends, have forgotten why we live in the United States? Should they go live in their native land for a year to be cured of their ignorance?

Before entering the air-conditioned house again, I took a deep breath and prayed my favorite prayer, the Anima Cristi, written by Saint Ignatius of Loyola, who was a soldier like my father. Repeating, “Passion of Christ, strengthen me!” under my breath, I sat back down at the computer and prayed, “Lord guide me!” as I typed a response.

“TO FAMILY AND FRIENDS WHO ARE HAPPY ABOUT OBAMACARE:

If it walks like a duck, acts like a duck, and smells like a duck – it’s a duck! For all my Cuban and Nicaraguan family and friends who still think that we aren’t headed towards socialism, yesterday {Thursday, June 28th} was the day that proved we ARE heading down that road (though actually, it happened the day you voted for Obama). You and I ran away from this kind of government, yet you still are happy with it? WAKE UP and smell the socialism! It’s here! Open the history books and read how it got into our birth countries! Educate yourselves, please, for the love of God, before November! My father–your uncle, in many cases–didn’t die fighting socialism and Communism in Nicaragua for us to accept this.

After that, I was sure I’d started World War III with my family. But three days later, not one of my family members or friends who support Obama had responded. Several decided it would just be easier to unfriend me.

Despite my disappointment with family and friends, the experience made me think long and hard about what the SCOTUS decision means for our country. The decision was to be expected, because judges can’t rewrite laws just to make them Constitutional. Normally, the justices would have struck down the law and instructed Congress to rewrite it. No one knows why Justice Roberts elected to uphold the law, but it’s generally accepted that it wasn’t because he buckled to liberal pressure or was stared down by President Obama. Political experts instead believe that Roberts realized the historical consequences of a ruling that would strike down the landmark healthcare law. With no precedent for the Court to fall back on, it was difficult to say the individual mandate crossed a Constitutional line.

Many commentators have concluded that Roberts’ decision gave Romney the winning ticket since he can now say the Democrats gave us an unconstitutional tax. Some say Congress will be forced to repeal the law due to the public’s complaints–and Roberts knew this. The bottom line is, this SCOTUS ruling upheld an unconstitutional tax and this case will serve as a precedent for allowing other laws that are unconstitutional. Now, Congress knows it can tax behavior and get away with it.

Judge Roberts (a Catholic) gave the federal government the power to tax us for anything, even if the tax it decides to impose doesn’t fit into any tax category the Constitution says Congress can levy. Yes, we have a chance to elect better leaders in November, but now every generation will have to fight against one tax or the next, whatever behavior (or even inactivity) that the government decides we need to be taxed on.

George Washington once said, “Government is not reason, it is not eloquent, it is force. Like fire, it is a dangerous servant and a fearful master.” How ironic that we just celebrated our country’s independence from tyranny yesterday, when in fact today our government is more oppressive than England ever was, with more citizens depending on that government than ever before. With 236 years of freedom behind us, that freedom ought not to be negotiable.

In many areas of life, we submit to individuals not for their own good qualities, but out of respect for their office, for the authority they represent. But for that authority to be legitimate, the leader himself must submit to God and the objective Truth that He has given us. Only the leader who has, in humility, accepted obedience to a higher authority himself has the right to demand obedience of those he leads. President Obama, in pushing a socialist program onto our nation despite its overwhelming rejection by the people, has failed in this task.

A friend of mine, Brian, said it best:“Obama does not understand the model of American freedom or its Christian foundations. ObamaCare has foisted upon us the greatest human injustice imaginable: allegiance to an ideology, not founded in human freedom or love of liberty, but through radicalism by the force of the state.” 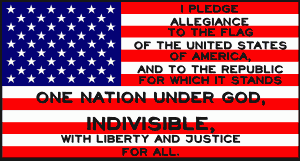 But there is some hope, according to Catholic League president Bill Donahue. “While the Supreme Court decision lacks clarity, the Catholic response will be anything but ambiguous: the battle lines between the bishops and the Obama administration are now clearer than ever,” Donahue said. “Fortunately, not only do practicing Catholics overwhelmingly support the bishops, but tens of millions of non-Catholics do, too. ObamaCare may have survived, but it is by no means a given that the HHS mandate will. It is one thing to levy a tax, quite another to level the First Amendment.”

So where do we go from here? We’ve seen the fruits of Obama’s labor and his unwillingness to submit to God. We know we need to get this man out of office in November. To do that, we need most of all to pray for this country, for God to put His hand once again on it and bring it back to Him as He did with our forefathers.

Are you registered and ready to vote?  Let your voice be heard, come November. I for one won’t allow the death of my father, who fought and died for my family to be free of government control, to be in vain. I will be voting to honor his death by upholding freedom over tyranny, so that my own children won’t suffer at the hands of their government as we did in Nicaragua.

27 Replies to “From Nicaragua to Now: One Family’s Sacrifices for Freedom”