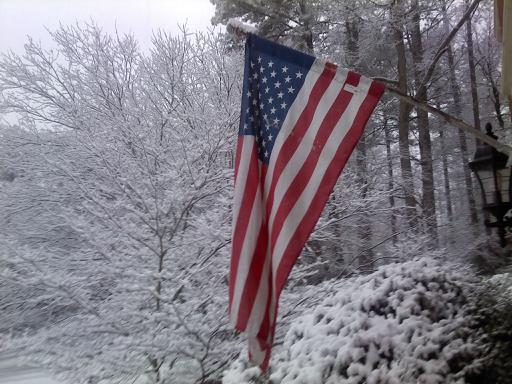 As Americans, the 4th of July is one of our biggest holiday celebrations.  It marks the very important anniversary of our Nation’s independence.   Growing up as a military child, holidays celebrating our country meant something very special to me.   Even as a child, I remember the wonderful sense of Patriotism building up inside of me.  I didn’t know the ins and outs of our country’s politics, or the serious problems we faced everyday as a nation, but I knew I felt proud.  I knew I loved our country.  And I knew there was something special about being American that was innately rooted in my being. A lot of this Patriotic sentiment came from my father.  He, being a Navy veteran, and also the grandson of Immigrants gave him a unique perspective. My father was not Baptized, nor a Catholic for a large part of my childhood, but ironically, he made it clear from early on to always instill in me the greatness of our nation as rooted in God, not man. (a perspective which I feel may have helped in his conversion later in life).

I remember a personal experience while attending Mass with my mother when we lived overseas.   I arrived early with my mom, and we walked in as others were walking out.  Being the only base chapel, we had to share the building with other religious denominations.  As I sat in the pew, I looked around.  I noticed the priests quietly come out to the altar. I was confused, as it wasn’t time for Mass to start yet.  What I witnessed next made an everlasting impression on me.  The priests carefully placed the Tabernacle with the Host at the front on a table.  The large plain wooden cross was loosened and flipped over to reveal an ornate crucifix now at the center of the wall behind the altar.  The vestments were laid and the candles lit.  It was quite a transformation to see and is something that has stuck with me to this day.  The physical way the chapel was changed that day represented a much larger picture to me about the tradition of our faith and what it can offer to our American heritage.

Several years later, when traveling in Northern France with my high school band program, we came to the small town where we were going to stay.  Our bus pulled up, and the townspeople had gathered along the street.  The Mayor of the town came to greet us, and started to speak.  I assumed we would hear a welcome speech and then be released to our homestays.  Instead, what I heard was an elaborate history of the town, and how American troops had liberated and protected the town in World War II from complete destruction.  The Mayor concluded by saying that he did not want the townspeople to ever forget what had been done for them, and he wanted us to know, as young Americans, that he would keep this promise.  He then came around and shook each of our hands and said, “Thank you.”  I was amazed at the story, and even more so that someone, in a small town in France, would take the time to acknowledge America for her charity and greatness over 50 years later.

It was in that moment that I realized being American was much more than just a nationality.  All of my dad’s lessons came back to me in a flood of thoughts.  There was something special about our country, the people in it, and what our destiny was in the world.  America’s founding, based on freedom and liberty, was definitely rooted in something stronger.  My dad had said to me in a recent email, “Our founding fathers believed – rightly, I think – that God gives us the blueprint for living life properly. Our task is to discern his plan and live by it. In return, one prays, He will give us His grace – Grace that we are not entitled to and that we cannot earn, but that grace lies at the very root of our freedom.” He also told me, “When Jefferson wrote : ‘We hold these truths to be self-evident, that all men are … endowed by their Creator with certain unalienable Rights…” it wasn’t designed to be a bumper sticker, it was a statement of truth – self-evident truth derived from faith.”

I began to think about his statements, and all our founding fathers had to go through to establish a document as bold as The Declaration of Independence.  Then it hit me.  Faith.  Faith is why the Declaration signers had the courage to stand up, and why we are truly a free people.  The founders were referencing God.  Just as my dad had always taught me.

When telling my dad about my upcoming 4th of July blog post, he told me about his own Russian born grandfather, whom he called ‘Pop.’  Pop’s chicken farm had failed – being taken over by larger chicken businesses. He was then made to supplement his social security by taking a part time position as a maintenence man at one of those larger chicken processing plants.  My then 14 year old father, seeing what hard times his Pop had come upon, asked him if he ever regretted immigrating to America. In his own broken language made up of English, Yiddish, Spanish, and Polish, Pop told my father emphatically and almost angrily:

“I am an American. I know why I came here. I worked hard, I sent two sons to college (Pop had only completed 3rd grade), I own property, I worship as I please, and I do what I want.”

My dad went on to tell me, “It wasn’t until after I had traveled the world and gone to war that I began to understand.  After seeing how the rest of the world lives – even the “developed” world, I started to grasp what Pop meant. He was thinking about life, liberty and the pursuit of happiness and he knew from whence those rights came as did our country’s founders: God, not man.” 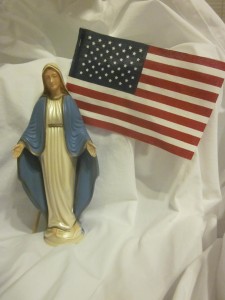 So this Wednesday, when we are celebrating the wonderful gift of independence of our great nation, we must also remember the gift of our faith. Freedom and liberty were surely found in America that day in 1776.  But it was through God given talents of great men, we were given a vision no other country had previously embarked upon.  True freedom came through faith in God, which shaped the immigrant’s faith in the American promise.  For it is this faith that allows us to live out that vision set forth by our founding fathers; and will allow us, as citizens, to continue to strive for a better America.  In the words of the time honored hymn “Faith of our Fathers:”

Mother Mary, pray for us!