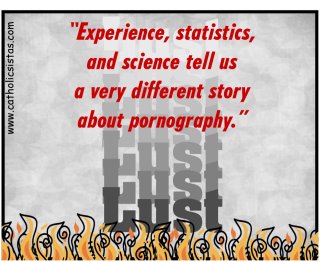 In case you haven’t heard, the most popular books on the planet right now are the Fifty Shades of Grey series by E.L. James. Not because they contain fine literature, but because they contain explicit sex scenes with characters engaging in sadomasochistic bondage. Given our culture, it’s no surprise the books are flying off the shelves and onto Nooks and Kindles at lightening speed. What is surprising, however, is that so many Christians are openly reading and even promoting these books to friends and family.

Well, why not? Fifty years ago, pornography was considered immoral at worst, unseemly at best, but clearly something in contrast to Christian values of fidelity, chastity, and self-control. But today, it’s not even morally neutral, but something people actually recommend to improve a relationship or marriage. The prevailing attitude is that in moderation, it’s harmless. And as an occasionally-used tool, it can actually bring a couple closer and enhance their sex life.

Men are wired to be stimulated visually, which typically makes them more prone to concupiscence (a fancy word for lust). To sustain a healthy, give-and-take relationship with a flesh-and-blood woman, a man must learn self-control, self-giving, and self-sacrifice. He must treat the woman as a person with dignity, not just a thing to be used for his sexual pleasure.

When I was a newly converted and spiritually immature Catholic, I used those same excuses to justify reading porn instead of watching it. But then I realized I read the stories for the same reason I’d watched the movies: to get sexually aroused. I just used my imagination instead of a television, but the end result was the same. Pornography, whether it’s tucked away in the back room of a video store or between the pages of a bestselling novel, has only one purpose: to incite lust. Christians especially should remember what Jesus said about that: “I say unto you, that every one that looks on a woman with lust has committed adultery already with her in his heart” (Matthew 5:28).

When we use our sexuality as God intended–in an act of mutual self-giving with our spouse–we get good outcomes. We bond with our spouse, we bring new life into the world, we forge strong marriages and families. But pornography turns what should be a most profound exchange of love into a solitary, selfish grasping for pleasure. It fosters sexual anxiety, damages our ability to have healthy relationships, and destroys marriages and families. Lust–and thus, porn–is sinful, folks. And we need to stop pretending there’s anything gray about that.