Was the Eucharist Ever a Little Snack? 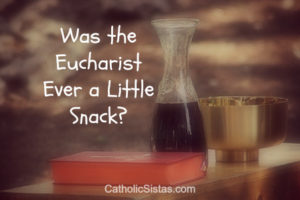 An acquaintance recently joked, “-slippery slope! The Eucharist started out as ‘snack time’ for the Catholics and look where that went!“

I’m not sure he knows how a slippery slope works.

The Eucharist is a Christian teaching that has remained constant for 2000 years. That is no slippery slope. The real slide is on the protestant side, slipping away from His Church (John 16:13; Matthew 16:18; Matthew 28:16-20) with thousands of competing denominations all claiming to be “Bible only.” The Eucharist has been the pinnacle of our services since Acts; they are the ones who have slid into little snacks. I don’t care if he doesn’t believe in the Real Presence of Christ in the Eucharist, but I do care when Church teaching is misrepresented.

The Eucharist has never been “snack time.” About an hour of reading the first Christian writers (If one can stop after only an hour; we couldn’t!), beginning with the Gospels and epistles, then onward 300 years until the New Testament was codified (and on and on …) makes it crystal clear that these men 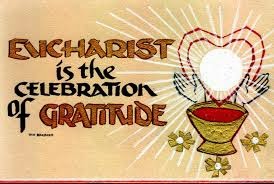 believed in the Real Presence of Christ in the bread and wine. And these were the same men who picked and prayed our New Testament into life.

The apostles were Jews. They knew about manna from heaven. They knew what the Passover was ~ the sacrifice of the innocent lamb whose blood saved them from death. They ate their lamb. They watched Jesus bless food, break it, and feed 5000. He told them to eat His flesh in John 6. When some left out of horror, Our Lord said again that they had to eat His flesh. At the Last Supper, when He lifted up the Passover bread and wine and said, “This is My Body; this is My Blood,” they were floored. They got it. After the resurrection, with some disciples in Emmaus, He was known in the breaking of the bread (Luke 24:30-32). Paul told the Corinthians that they would be guilty of a sin against the Lord, his body and blood, if they came unworthily (I Corinthians 11:27-29).

The Didache, a catechism written in the 90’s (yes, the 90’s!), directs Christians to confess their sins before partaking in the Eucharist so that the sacrifice would be pure. Since the sacrifice of Jesus is the same yesterday, today, and forever, what He did 2000 years ago is just as efficacious now. He is our perfect sacrifice for sin!

Ignatius of Antioch, writing in the year AD 110, said that he desired the Eucharist, the flesh of our Lord Jesus Christ.

Justin the Martyr, AD 100-165, wrote, “For not as common bread nor common drink do we receive these; but since Jesus Christ our Savior was made incarnate by the word of God and had both flesh and blood for our salvation, so too, as we have been taught, the food which has been made into the Eucharist by the Eucharistic prayer set down by Him, and by the change of which, our blood and flesh is nourished, is both the flesh and blood of that incarnate Jesus.”

And on and on they wrote of the Real Presence of Jesus in the bread and wine, long before the New Testament was even bound and called sacred by Church councils. Men like Irenaus of Lyons, Tertullian, Origen, Clement, Augustine, and the council of Nicaea. The first Church council was in Jerusalem, recorded in Acts 15, when the question of circumcision was hashed out by Church leaders, then explained to the people. We believe what Jesus said to the Twelve in John 16, that the Holy Spirit would guide them into all truth. He still does. And we still follow. 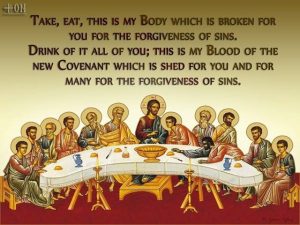 So I encourage my non-Catholic friends as they insult the Church, to at least make sure the facts are straight. When you falsely say that the Eucharist began as a little snack, your entire witticism falls apart.

To know what the Catholic Church teaches, go to its catechism online or pick up a print copy. Those of us who love our Church will call out blatant untruths and bad jokes. And tell good ones about ourselves!