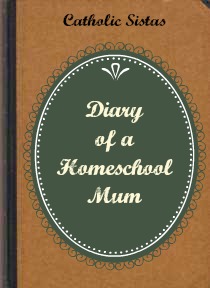 I don’t know if you know me. If you are a regular reader of Catholic Sistas you have hopefully met me through the 7QT First Friday posts or possibly have read some of my other posts. I’ve recently joined the new team we have writing the Raising Saints Homeschool monthly series.

Way back in the early nineties when I was expecting my fifth child we had just purchased our first home and our two oldest daughters were attending the local Catholic elementary school and our five year old son was a drop out from kindergarten. The three year old was still enjoying snuggles even if the ever growing baby lump was getting in the way.

Wait you say – the five year out was a “drop out”? In a manner of speaking, yes. Your typical apple pie and blue eyed little boy who enjoyed building train tracks with his red headed younger brother was coming home from kindergarten and systematically beating up his best friend. As you can imagine this was not sitting well with either his father or I (and his brother wasn’t much enjoying it either!). I had a frank 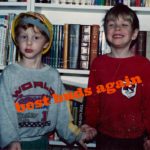 discussion with his teacher and she agreed with my suspicion – my son was coming home and pummeling his younger brother most likely as a result of the aggression he was seeing on the play ground. She readily agreed five year old kindergarten was not a prerequisite for grade one and he could as easily learn his numbers and letters with me at home. Little did we know then that it would be another ten years before he stepped foot inside another brick and mortar place of learning. For his other siblings – most would never enter a “real” school room until they left home for college, while a couple got to sample of public school life for one year while they attended a Montessori Charter school.

What will follow over the next few months will be a collection of journal entries based on my memories of the early months and years of homeschooling. Let’s begin now…

I’ve talked with Alicia’s Godmother once again about the idea of starting to homeschool and I think she has finally convinced me to try. She talked me out of the idea that I need to become a certified Montessori teacher in order to be able to teach them. I’m not sure though. I borrowed a few books from the library about the Montessori method. I love this program but if I wait until I’m certified it will take me 2 years. I can’t imagine Caroline & Alicia making it through two more years in the school here. Hugo seems ready for me to try but he agrees we need to wait until the baby is born and start in the fall. I’m so glad he agrees we should wait. It’s going to be hard dealing with the school board when I pull the kids out. Everyone I know says they had to answer all kinds of questions and I think they even had to go to a board meeting or maybe it was a meeting with the superintendent? I’m dreading this, just dreading this!

I’m sorry I’ve neglected you for so long but Elizabeth joined us … on Alexander’s birthday! Good thing we celebrated it early. I don’t think I’d be up to celebrating it right now. Worst. Labour. Ever! I wonder how long till he realizes he’s sharing his birthday with his baby sister. He seems pretty pleased with her but has been very quiet since she was born. Ooops, I hear the baby … gotta go. I hope I can find time to squeeze a few more words in soon.

I’m the worst diary writer ever. Where has the time gone? Elizabeth is already four months old. We got a scare when she was so late focusing her eyes – I thought she was blind! All of our other babies were looking us in the face and tracking in their first week. I called Hugo at work, crying and he called the pediatrician. His wife called me & was so reassuring. Anyway – clearly nothing is wrong with her vision now. She’s constantly grabbing my glasses and pulling them off.

I have good news and bad news, Diary. Bad news first. Last Wednesday I had to walk over to the school with both boys and Elizabeth in the snuggly. The school had called – Caroline had been hit in the face with a baseball. Apparently the teacher on yard duty told her it was her own fault because she was sitting in the grass watching ants. Seriously? A little kid is interested in nature and gets hit in the face wi 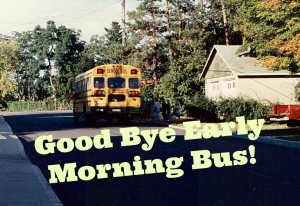 th a huge bloody nose and THAT’S what you tell her? Then Thursday I had to call a taxi because the school called again and I still had Caroline home recuperating from the getting smashed in the face. This time Alicia had fallen from the monkey bars … they think. She might have lost consciousness … they think, but are not sure. Apparently the teachers on lunch duty didn’t even notice Alicia lying on the ground until some of her classmates went to get one of them to help her. I was livid when I found her barely able to sit up straight in the chair outside the principal’s office.  (It was interesting trying to fit all five children and myself into the taxi!) Now here’s the good news!!! When I met with the principal to tell her that my girls would not be returning the rest of the school year and I didn’t think they would be back in the fall, she didn’t even bat an eye. She just nodded when I said they would be joining the Mary Immaculate School. She knows full well that’s our small homeschool that the mums in the area have set up. When I told Marie about it she laughed and said – ‘they’re probably afraid of you suing them. I bet you don’t even get a call or letter from the school board.’ I guess that’s the silver lining to my poor girls getting hurt so badly at school. Well, it’s too quiet downstairs – I better go see what the kids are up to!

It’s Canada day and tonight Hugo will take the kids the park for the fireworks. We talked about driving into Ottawa and watching them at the parliamentary buildings but Elizabeth is so young. I’ll stay home with her tonight.

Alexander seems to have stopped talking since Elizabeth was born. In every other aspect he seems normal. But he no longer talks. He just nods or shakes his head to questions. This week was his turn to go out with Daddy to Tim Hortons and Hugo said he was interested in what was going on around him but – no conversation. He got his MMR just after his fourth birthday. A friend who’s a nurse brought that to my attention. I’m trying not to worry too much.

I’ve decided to order my curriculum from Our Lady of Victory in the States. I met with our principal of our little school and she agreed that I would feel more comfortable if I did that as I’m still very nervous about the whole idea. It’s so comforting to know she’s had a lot of years teaching in the regular school system. I don’t know if I’m more excited or more nervous about this adventure I’m about to plunge my whole family into.

Well – dear readers, I will see you again in June and you can hear more about my adventures in our early years of homeschooling. I’m currently in my  twenty fourth year of homeschooling with just another decade or so stretching in front of me until all my 13 munchkins have graduated. I’m sure I will have plenty of memories and adventures to share.

One Reply to “Diary of a Homeschool Mum part 1”