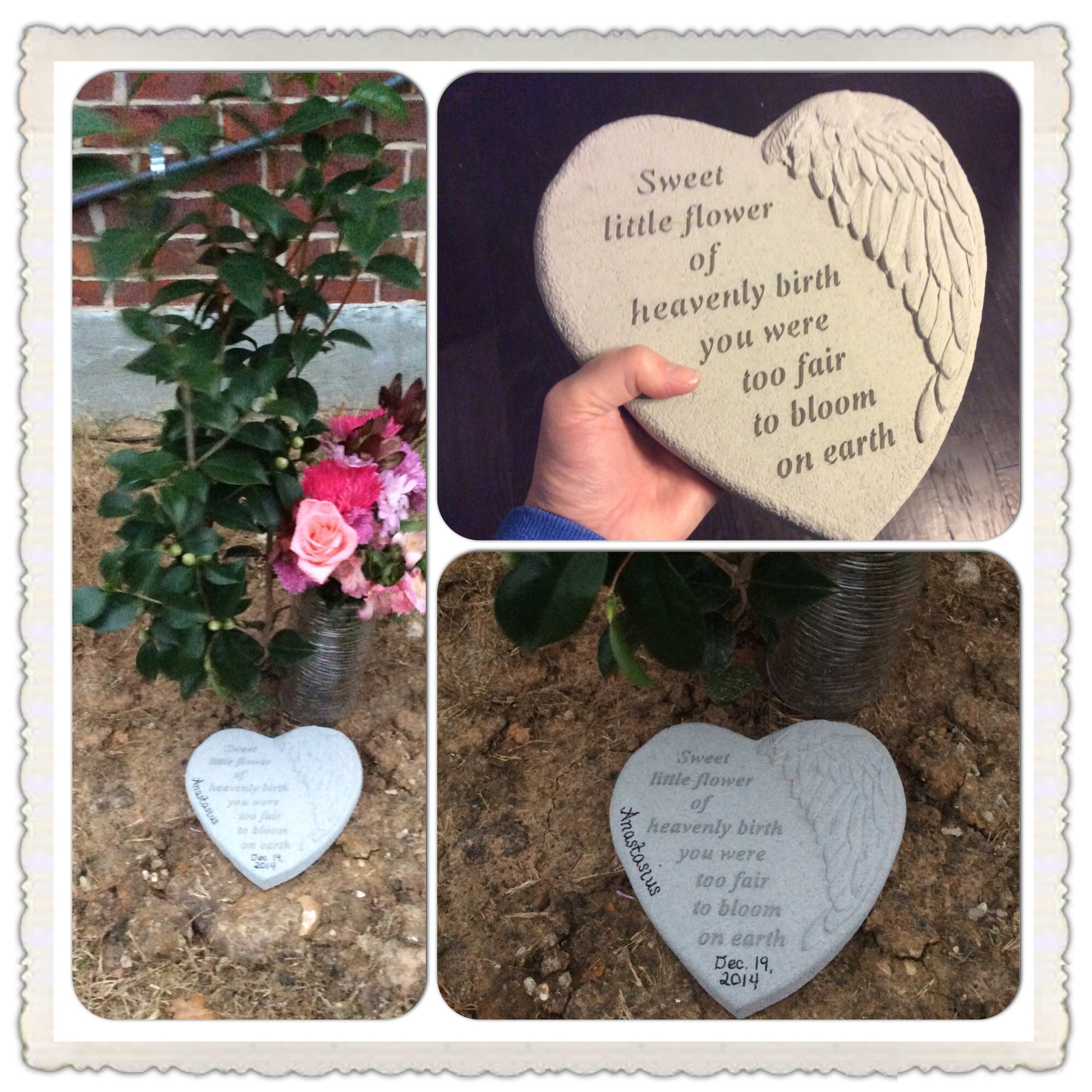 Over the years, as friend after friend had experienced miscarriage I wondered why it is God not only allows it, but allows it so frequently.  I learned that the grief is very real and the worst thing you could say to a woman who miscarried is, “It’s okay, you can try for another.”  To the woman, the baby she had in her womb wasn’t to be replaced like a wrecked car.  The baby was real, with its own due date and unique identity.  The woman would forever count the event as significant, though the world would have her not speak of it publicly.  “I have two children” she would answer the inquirer, but in her heart, “I have had three” or four, five, or however many.

As far as divine revelation has instructed us, the only way God is making new souls is through some sort of deliberate human act.  Intercourse that is open to life, not open to life, within marriage, not within marriage, consensual, or even forced are all used to bring about new life.  Also, the deliberate human acts of fertility treatments can result in new life.  I’ve come to believe that God uses miscarriage to quickly populate Heaven with new souls to pray for our fallen world.  God can populate Heaven with perfect little souls that He applies the merits of Christ’s sacrifice to by a baptism of desire, and thus He reinforces Heaven with souls who magnify Him and pray against the evil that prowls throughout the world, seeking the ruin of Earthly souls.

Why does He have to use such a painful experience, miscarriage, to do His will of good?  I don’t know.  But I do know that the creation of all life is painful.  Women experience the pains of childbirth to bring about physical life.  Jesus died a painful death on the cross to give us all new life in Him.  And such, there is great suffering in bringing about life to directly populate Heaven because it is genuinely that.  New life.

One fine day in November I noticed I had a reason to take a pregnancy test for the first time in over six years.  The positive line showed up dark pink minutes before the control bar ever thought about turning pink.  Positively pregnant.  I was stunned.  I was humbled.  It was a shock.  I felt small.  I passed the shock to my husband that evening over dinner.

By dinner the next night, my husband had already picked out boy and girl names. We started preparing.  I went to the doc and saw a perfect sono for a 5 week 3 day pregnancy (couldn’t believe I got in so early).  I learned my progesterone was low.  I’ve never had that before, so I was put on progesterone pills, thrice daily.  The weeks went by.  I have a history of hyperemesis, and this time around I just had mild nausea.  It was glorious!  Is this what women experienced normally?

Just Waiting for a Hearbeat

We didn’t tell anyone, not family, not friends, not even our kids, with the exception of my running buddy because the mild nausea and heartburn prevented me from running much anymore.  Then another friend, the foundress of this blog, Martina, learned she was miscarrying her seventh child (she shared her story here).  I was crushed for her.  Then I realized how close my due date was to hers, less than two weeks later.  I felt compelled to tell her my news in private, so she didn’t find out with a public announcement that I was planning on doing at Christmas – after my next sono appointment, when we’d hear the heartbeat.  She was happy for me.

We cleaned out the spare room and closet of junk because my running buddy was moving and offered us her old baby gear.  Of course we’d take it!  Just after we confirmed the heartbeat.  We discussed our next trip to Disney World, and decided it would be best to wait until after the baby was born, and take the two month old.

I was looking forward to telling family, especially my son.  He loves babies.  I knew he’d be the most excited about a new sibling.  We just needed a heartbeat.

The appointment day came.  My doc talked about the progesterone, asked if I’d been taking the pills.  “Have you had any bleeding or cramping?”  Nope and nope.  He asked about my symptoms.  I happily reported I’d only had mild nausea.  “You’ve never miscarried, right”, he asked.  He continued, “Well, today I’m really hoping to see a heartbeat, let’s get started.”

The exam began, and silence dominated.  Images flashed on the screen, but his lack of narration told me he hadn’t found life yet.  Finally, he explained there was a distended sac.  The baby was a week behind in size.  There was no heartbeat and at that size there should be.  And there’s no blood flow.  He sincerely offered me his condolences.  He explained that the low progesterone was my body recognizing that this wasn’t a viable pregnancy, though he didn’t see anything wrong at the time.  I remained stoic and accepting as we talked about what to do next.

I never saw this news coming.  I held back tears as I made my next appointment.  And as I rode the elevator down five flights with strangers.  And as I walked to my car in the parking garage.  Once in my car, I cried.  In anger I deleted the list of baby items I’d made that we would have needed.  I texted my husband.  “No more baby.”  I messaged my running buddy, and Martina.

I returned home and put on a face for the kids that told them everything was fine.  I had finished “running my errands”.

I wasn’t ready to be verbal.  Martina encouraged me to name the baby and tell the kids.  It was their sibling.  I agreed.  But still wasn’t ready.

A couple more weeks went by.  My body was still holding on to the state of pregnancy.  Eventually I was forced to ask for help.  I was at my parents’ house and told the kids to get in the car.  I looked at my mom and said, “There’s no good time or place to say this.  I’m having a miscarriage.  Can you take care of the kids on Friday so I can have a D&C?”  She was heartbroken for me.

The morning of Friday December 19th I finally passed what I believed to be the baby.  However, my sono showed I wasn’t nearly done.  Being so close to Christmas, we decided it was best to go forth with the D&C in order to avoid any complications during such a demanding time of the year. The kids stayed the day and night with my parents.  Afterward, I was a drowsy mess from the anesthesia, but otherwise good.

Saturday, five weeks to the day after he had named our future baby, my husband and I discussed baby names again.  We decided not to use either of the Earthly names we were thinking of, and instead chose a Heavenly name for our Heavenly baby.  December 19th had been the feast day of Pope St. Anastasius I.  We read up about him, and decided that would be a great name for our little one.  Baby Anastasius.

Later that afternoon, my husband purchased a rose bush and retrieved the kids.

I explained to the kids that God makes babies and decides whether they are meant for Earth or meant for Heaven.  God had given us a baby meant for Heaven.  Our son realized what this meant.  He became noticeably attached, and saddened.  He held the box of the remains while my husband dug the hole for burial.  Our youngest daughter wanted to place the box in the ground, which she did.

Our son was upset.  I invited him to help me wrap gifts so we could talk.  He was upset we hadn’t told him that we were expecting a baby.  As an almost 10 year old, he would have loved to have a new baby in the house, but understood and continued to ask more questions about the hows and whys.  He smiled when he realized that Baby Anastasius got to go to Heaven without having committed any actual sin.  He has asked that if there is a next time, that we would tell him immediately.  I told him we would, and that he would just have to wait with us to see if God was giving us another Earthly baby or another Heavenly baby, and he agreed.  I explained that now he has a sibling in Heaven to pray for him because God decided we needed Heavenly baby, and that’s an honor – not everyone has been blessed with a heavenly baby.

Mass has now been made even sweeter.  I remind the kids that when Jesus is made present in the Eucharist, that we are united physically with Him, who is in Heaven, and thus we are united with the angels and the saints, which now includes our Baby Anastasius.  This Christmas I smiled as I realized my family was all together there at Mass.  Truly, Christ is not divided.  What an amazing gift and privilege.

My little baby Anastasius, pray for us.

3 Replies to “My Anastasius”