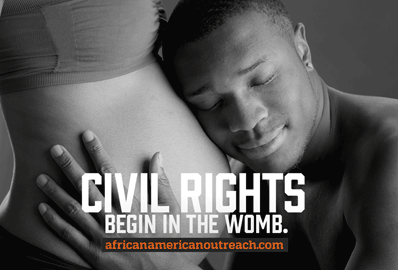 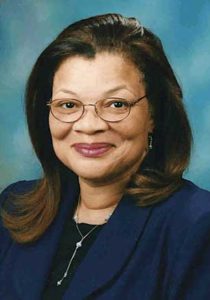 I was recently blessed to interview Dr. Alveda King, daughter of Rev. A.D. King and niece of Dr. Martin Luther King Jr. She is a powerhouse in the pro-life community, working tirelessly to bring the horrors of abortion to light and to bring an end to the ongoing slaughter of millions of babies each year. She works with Priests for Life as the Director of African American Outreach. She is passionate about not only ending abortion but also for carrying on Dr. Martin Luther King Jr.’s dream of equality for all, including the unborn. Following in her father’s and uncle’s footsteps, she bravely speaks from her heart, stands up to the injustices she sees taking place in our world, and refuses to allow anyone to be denied their God-given right to life.

Thank you for taking a moment to read what Dr. King shared with me. Her words are a powerful reminder that there is still so much to do to end this war against the tiniest humans in our communities, against the women who bear them, against the fathers who love them, and against our family units. However, as you’ll see, Dr. King reminds us that with God’s love, forgiveness, and help, we can still overcome this scourge.

The Catholic Church takes a strong, unrelenting stance on the sanctity of all life. You are not Catholic and yet you work with Priests for Life. Why did you choose to work with a Catholic Organization?

I believe God directed me. My uncle, Dr. Martin Luther King Jr., during his “I Have a Dream” speech said that he had a dream that Protestants and Catholics, Gentiles and Jews would join together and would sing “free at last!” In that effort to join with every community of faith on the planet, I accepted the invitation from Father Frank Pavone to head up the African American Outreach to educate, inform, and activate the African American community as to the terrible scourge of abortion and how the African American community is targeted, specifically by the abortion industry headed up by Planned Parenthood, to reduce our population through the scourge of abortion.

A very dear friend of mine told me that for her, in the black community, abortion is just considered “taking care of business”. When she had her abortion, no one batted an eye but said she did what “needed to be done”.  What can we do to change this attitude so that the next generation of black families doesn’t continue to fall prey this belief? 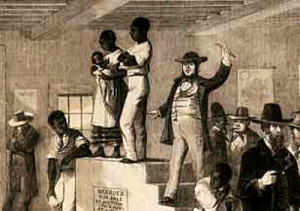 When we look at the scourge of abortion, we can go back many, many thousands of years, all the way back to the Old Testament when there was a battle between Sarah and Hagar; Sarah, the wife of Abraham and her son Isaac, the heir to the Promise, and Hagar, the concubine to Abraham, through Sarah’s agreement and arrangement. Sarah said to Abraham, “Take this woman into your bed and have a child so that you can have an heir.” But God had another plan. When human beings intervene in divine intentions there can be outcomes that are not beneficial. And so, with slavery throughout the years, you always had the wife of the master and the slave or servant of the master conspiring against each other, sometimes through jealousy. I know that’s hard to understand, but when you see an African American woman saying, “We just did what we had to do. We were taking care of business”, you look at what that business is. Often black women, slave women, would kill their babies rather than have them born into slavery. Often the slave master’s wife would say, “I’ll help you not have babies. We can abort your babies or we can sterilize you.”

That kind of thought has gone on throughout the ages, but now, here in the 21st century, the spirit of the abolitionist has risen again. Men and women of faith and conscience are saying, “We can help the mother, we can help the father, and save the baby. We can love the family.” And so, when we love a family, a woman no longer has to feel that in retaliation or desperation she must kill her child. She is now learning no matter what her ethnic group happens to be, that she is loved, the baby is loved. The father is learning that his seed does not have to be destroyed.

This is a very resonating message. It is tied into the faith and love of Jesus Christ in His shed blood, “For God so loved the world, that He gave His only begotten Son, that whosoever believes in Him will not perish but have everlasting life.” In that message is also love for the family. Women can learn that they are loved and protected and their babies are as well. The father can know that he can guard over his seed rather than see it destroyed.

Margaret Sanger had a very specific agenda in mind when she founded Planned Parenthood. As she said, the goal was in part “the extermination of the negro population”. While Planned Parenthood denies that this is still their goal, do you think they still target the black community? 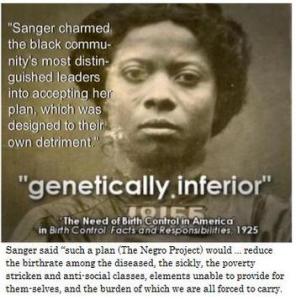 I always wonder, and I say it all the time, “Who hurt Margaret Sanger when she was a girl; what happened to her that was so bad it caused her to want to kill little babies and maim women and disregard the seed of the father?” There are many who leave Planned Parenthood like Abby Johnson and many in a group called the Centurions for example. Centurions are former abortion providers- doctors, nurses, those who have run the abortion mills, and they come out and say, “We don’t want to do this anymore.” By their testimony many have admitted that the goal of Planned Parenthood is to kill and abort babies and to provide harmful contraception and sterilization procedures. It’s not only directed at the African American community through genocide, one of their other large population is college campuses, another is the Latino and Hispanic communities, and certainly to all women.

Interestingly enough, we have discovered that throughout the history of abortion, since 1973 with Roe Vs Wade, that often in the Caucasian areas where most of the clientele was Caucasian, they would sometimes offer opportunities to help those young ladies keep their babies, but with the African American women it was always abortion. We do know that this genocidal eugenics plan has been in place by the testimony of some who used to work for Planned Parenthood but who have now left.

There is a global eugenics and genocide plan for those who have the wealth and human power to control the population to make an ideal world, to care for the planet, to care for the environment, and to have a smaller population and in their minds, a more worthy population. That is the goal of eugenic and genocide. Birth control and abortion are two measures that are used in these experiments, but there are many other warfare experiments- fluoridation of water is another one. So there are many plans to control the population and to take over the planet… but this is an age old plan, a human plan. There again, there is a divine plan where the love of God has enough provisions for all human beings.

Your father and your uncle fought so hard for equal rights for all people. Is this fight for unborn babies to be recognized as valuable humans with the same rights as those who are born the same fight as the one your family fought so valiantly? How do you think they would feel about this epidemic in our nation? 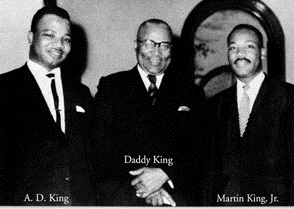 I know that if they were here today they would agree with me when I say that a woman has the right to choose what she does with her body, but the baby is not her body. Where’s the lawyer for the baby? It is possible to get justice, life, liberty and the pursuit of happiness in a family without killing our children. Mother Teresa had some of the strongest and firmest testimony on those accounts. We all know that Mother Teresa dedicated her adult life to caring for the least of these and she shows us we don’t have to kill people to gain our own inheritance.

What can we do, especially within the black community, to promote the pro-life agenda and take a stand like Martin Luther King did for civil rights, when we have the Margaret Sangers of the world working in direct opposition to us?

First, I always pray for the Margaret Sangers of the world- their spirits, their hearts, and their lives must have been wounded terribly to cause them to make these terrible and lasting decisions. There’s a more lasting opportunity, through Christ and His love for us, to reach out and help others. I forgive Margaret Sanger, I forgive the doctor who did my first abortion and I forgive Planned Parenthood. Certainly I stand against the heinous agendas, those agendas are wrong, they can and must be exposed, but in working in prayer and in love, the bible says that when we pray we must forgive as our Heavenly Father forgives us. So as we forgive we move forward with the understanding that abortion kills a baby, harms a mother, robs a father of a birthright, and so hurts societies and hurts communities but we ask God to guide us out of this heinous scourge into Truth.

As Christians it is our duty to protect all life, from the moment of conception to natural death, do you have any suggestions that can help us uphold God’s laws in terms of upholding the sanctity of life?

We have an election year in November of this year and next year. As we move forward we must vote as Godly, Christian people, and if we will agree to do that we will find that we can elect men and women of good character. If we are able to do that we certainly see that we can begin to contribute by our prayers, our votes, our actions, and our support of the Bible… all those things as Christians that we have to do.

If you would like to read more from Dr. Alveda King you can follow her on her blog at Priests for Life.

Dr. King hoped this interview would be published before Election Day so she could encourage us to vote for life. She directed me to the following quote by Dr. Martin Luther King Jr. on May 17, 1957-

Please, take your hard-earned ballot and vote for life.

3 Replies to “Advocating for the Unborn: An Interview with Dr. Alveda King”