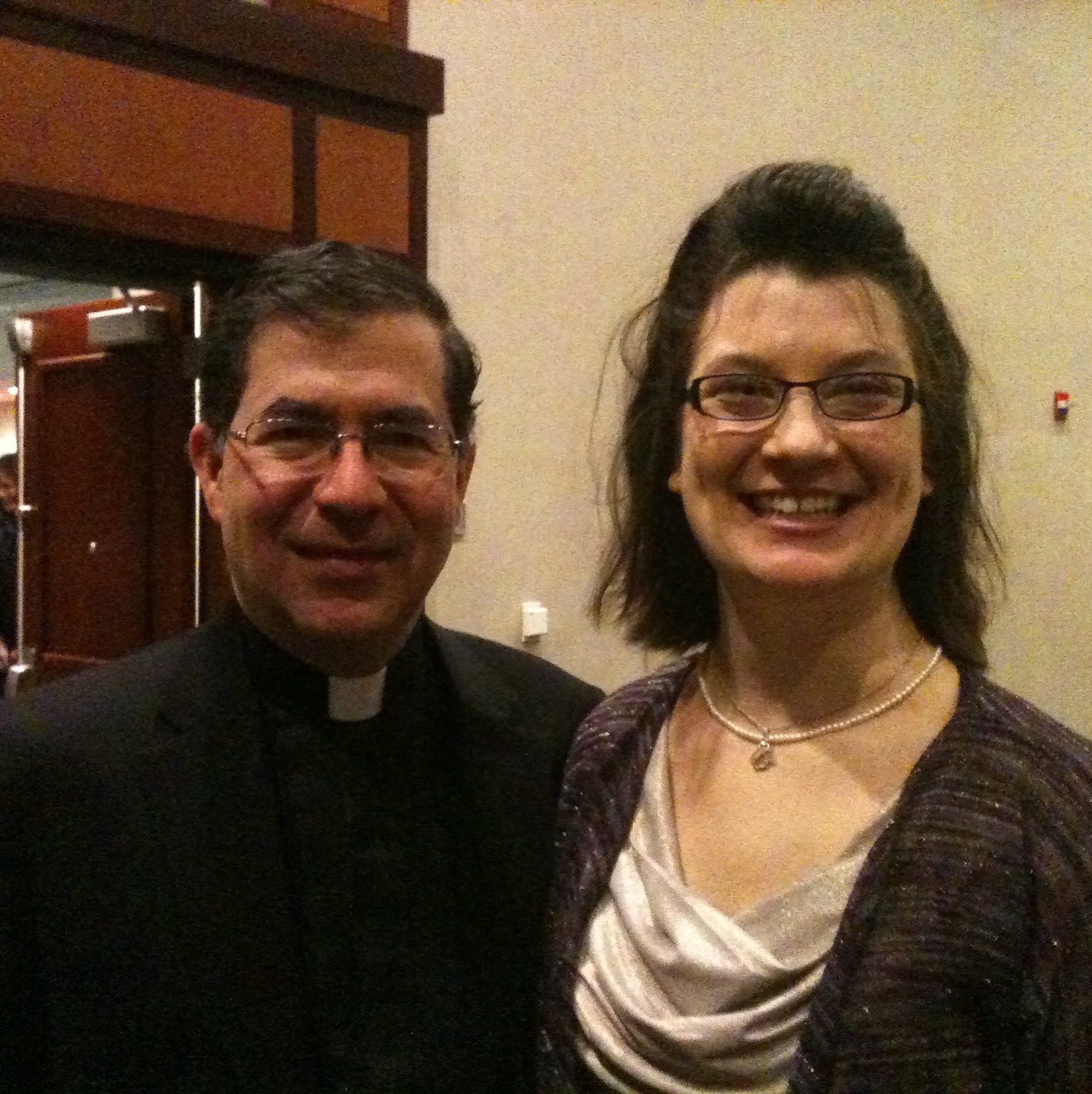 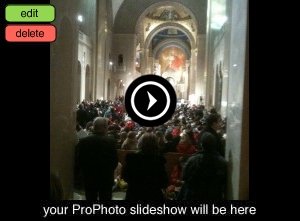 I’ve been on countless local Walks for Life, but have never been able to make it to the March for Life in Washington DC. Let me just say, “It was awesome!!!” With so many wonderful things about the trip, it’s difficult to contain myself. First, let me also say that I had some trepidation about going. For one thing, in 6 years of marriage, I’ve never been away from my husband and children for even one day. I also went alone — no travel partner or even close friend. Last, I’m not exactly fond of traveling. All these factors mattered not one whit once I got on the bus with the Gospel of Life group from our diocese. I still missed my family and still dislike traveling, but I found not only kindred spirits on the bus, but also a surrogate family.

After a 13 hour trip, we arrived in DC around noon the day before the March for Life and to this newbie the check-in process was chaos. I don’t know how many bus loads of people came to our hotel, but there were three or four concierges at the base of the escalators directing people to keep moving. Duffle bags, rolling luggage, backpacks, and other miscellaneous pieces of baggage were piled waist high in some areas. Yet, in this throng of travel weary people there was no misbehavior or unkindness. Something else was immediately apparent, the bus loads of people weren’t the fabled “old men” of the pro-life movement. There were families including infants, teens, elders, and people like me (somewhere in the middle).

The first event occurred a few hours later – the opening Mass of the National Prayer Vigil for Life at the Basilica of the National Basilica of the Shrine of the Immaculate Conception. Although we arrived two and a half hours before Mass was scheduled to begin, the pews and aisles were already filled to capacity. Prior to this, the largest church I’d been in was the Cathedral Basilica in St. Louis. The Basilica of the Shrine of the Immaculate Conception has a listed capacity of 3500 sitting and 6000 total. I wandered through the Basilica with one of my new friends from the bus – an eight trip veteran of the March for Life. Together she and I worked our way around the entire Basilica, stopping at two separate chapels to light votive candles and pray. Then it was time to find an open spot for Mass. There were none. In fact, some groups had been there for so long that they were lying in the floor sleeping. Room to breathe was rare with 13,000 faithful participants, most of them teens.  We finally located a corner in sight of the altar. Once Mass began, the awesomeness continued. The Procession was longer than the average weekday Mass. The final count was 9 cardinals, 42 bishops, 390 priests, 80 deacons, and 590 seminarians. Talk about disproving that “Catholicism is dwindling and new vocations are at all-time lows” tripe!

We returned to our rooms further exhausted, but filled with joy and peace from our Faith filled Mass. A scant eight and half hours later we were up and at ’em again, heading to the Youth Rally and Mass at the Verizon Center. When we arrived, a band was already playing contemporary praise music. One of my newfound friends and I decided to take the opportunity to receive the Sacrament of Reconciliation. The entire concourse of the arena was filled with young people. My friend and I found the entrance to the “confessional”. However, unlike the typical confession, there was a line over halfway around the concourse at least four people wide. We waited about 40 minutes for our turn. I was awestruck by the “confessional”! At least 50 priests were scattered around the Acela Club. They were hearing confessions at the bar, at tables, at the grill, and along the walls. It was amazing! Once we returned to our seats, we had only a few more minutes until the Youth Mass began. Again, the sheer numbers of clergy was amazing. It was amazing to see the devotion of the youth at the Mass. Many kneeled in the tight space of the arena seating and all raised their voices in song and response. In short, the Youth Mass, while not my style, was the ultimate Catholic youth experience.

Immediately after the Youth Mass, the march to the March for Life began with a police escort. After exiting the Verizon Center, there were individuals handing out signs, bumper stickers, and other stickers. At one point, I walked along-side two priests in blue robes carrying a silk-cloaked statue of Mary. Even in the sub-freezing weather, these two priests were bathed in sweat as they processed to the Mall. One of our members, another veteran, was in a wheel chair. However, that didn’t slow him or us down in any way, nor did it dampen our enthusiasm. He promptly asked for a sign and joined in the young people’s chants.

Upon our arrival at the Mall, we heard Sen. Rand Paul (R-KY) exhorting the attendees with his inspiring pro-life message. The crowd was so large that it was difficult to hear or see the speakers. Finally it was time to hit the streets again – this time on the official March for Life! The crowd milled around and surrounded us. We walked shoulder to shoulder peacefully and energetically. Although the pace was slow, and sometimes halting, the energy of all the participants was high. Young people began chants, “Obama, Obama, your mama chose life!”, “We love babies, yes we do. We love babies, how ’bout you?”, and “Hey, hey, ho, ho, Roe v. Wade has got to go!” Our group moved through the crowd, towards the front, rather rapidly, even with our wheelchair. Yet, no matter where we were in the crowd, the chants continued to grow and no misbehavior was observed.

Tiny babies swaddled in snow suits and covered with blankets in arms or in strollers were commonplace. Toddlers and elementary school children tagged along with their parents. Middle and high schoolers marched with their chaperones. College students proudly represented their alumni. Adults and the elderly mixed and mingled with all the groups. Some groups had matching hats, scarves, or jackets. Other groups had planned ahead and designed their own unique signs. Some of my favorites were small wooden crosses borne by a group from Texas (I think). The cross-members were labeled “Exodus 20:13”; while the upright members were labeled with a year (the significance of which I’m unsure). The significance of Exodus 2013 is twofold in my mind: the Scripture verse is simply “Thou shall not kill” and the March for Life is an exodus from complacency in 2013.

About halfway through the March, it began to snow. Yet, neither the snow nor the cold dampened the enthusiasm of the faithful. Throughout the crowd people snapped photos. Complete strangers could be seen, conversing and helping one another. As a newbie, I was struck by the overwhelming positive attitude of the Marchers. There were smiles all around and very little grousing about the bitter cold and snow. When we neared the summit of Capitol Hill, the energy became even more apparent as countless people hesitated and turned to see the crowd down the hill, behind us. Although we were probably solidly in the middle of the pack, I could not see the end of our number. Knowing that there were that many people with the same priority was awe-inspiring and humbling at the same time. When we finally reached the Supreme Court building chaos reigned, but still no griping or misbehaving. It was in front of the Supreme Court building that I saw my first and only counter-protestors. They had crudely created signs that had no purpose except to offend. With that in mind, I faced the woman holding the rudest sign and stated my objection to her sign, then simply turned and walked away.

Upon our return to the hotel, we had only a couple hours to thaw out and prepare for the Rose Banquet. After the freezing chaos of the March for Life, it was a relief to don my dress clothes. A fellow Sista and I had been texting throughout the day, trying to find a place to meet. We were finally able to meet in the lobby. Then I almost ran into Fr. Frank Pavone after coming off the escalator! When I found our table, I noticed it was diagonal from Fr. Pavone’s — sweet! There were also a group of nuns from a Franciscan Charismatic order at his table. I noticed them all standing for a photo, so I jumped up to get one as well. After taking the photo, I was informed by someone from my table that the light-haired man in my photo was the producer of October Baby. Before too long it was time for the program to begin.

Our first speaker was the creator of HeartBeat International, a crisis pregnancy center. Mrs. Peggy Hartshorn spoke to us of the history of the pro-life movement. One key point I learned was that, prior to the Roe v. Wade decision, there was already a small but potent movement opposing abortion. She also reiterated that, contrary to what abortion proponents say, groups like HeartBeat International care for pregnant women and the newly delivered. In fact, their numbers far overshadow the number of abortion clinics in the U. S. Mrs. Hartshorn also spoke warmly of the recently deceased Nellie Gray –  founder of the March for Life. As a newbie, I was stupefied to learn that one woman organized this rally for years and years culminating with this 40 year anniversary. Rep. Chris Smith also spoke fondly of Nellie Gray and her spirit that lead the March for Life for so many years. During his speech he intimated that we were not finished fighting the good fight to defeat abortion. New March for Life president, Jeanne Monahan, gave a rousing speech focused on the indomitable spirit of pro-lifers. She indicated that even though we had just witnessed the second term inauguration of the most pro-abortion president, we weren’t hopeless or defeated. In fact, since the March for Life this year was the largest ever, the pro-life crowd was showing our true spirit. Throughout these speeches I was also struck by how firmly Faithful this group of pro-lifers was. Knowing that the majority of those involved with the March for Life are Catholic gave me a burst of pride in my Faith.

Since this was the 40th anniversary of the March for Life many comparisons were made to the biblical stories involving the number 40. Moses and the Israelites spent 40 years in the desert before reaching the Promised Land. Like Moses, perhaps Nellie Gray was never meant to enter the promised land of an abortion-free United States, but we, the faithful, may indeed finally win this fight. Noah and his family also had 40 days of rain that wiped out the rest of the earth while they stayed safe in their God-directed ark. Yet, because they were steadfast and faithful to the Lord’s command, they lived and prospered even with the countless wild animals on board. Also, Jesus was in the desert for 40 days being tempted by Satan prior to His suffering and death. We, too, have been tempted and gone long stretches without much success and have been weakened by temptations to give up the fight. However, we have remained strong and continue on our journey. However, perhaps just like Jesus, immediately after our fortieth “day” in the desert we may be challenged even more before finally being triumphant. Though the cost of 55 million lives is overwhelming, we must remain strong in the belief that with God on our side, nothing can defeat us! March on!