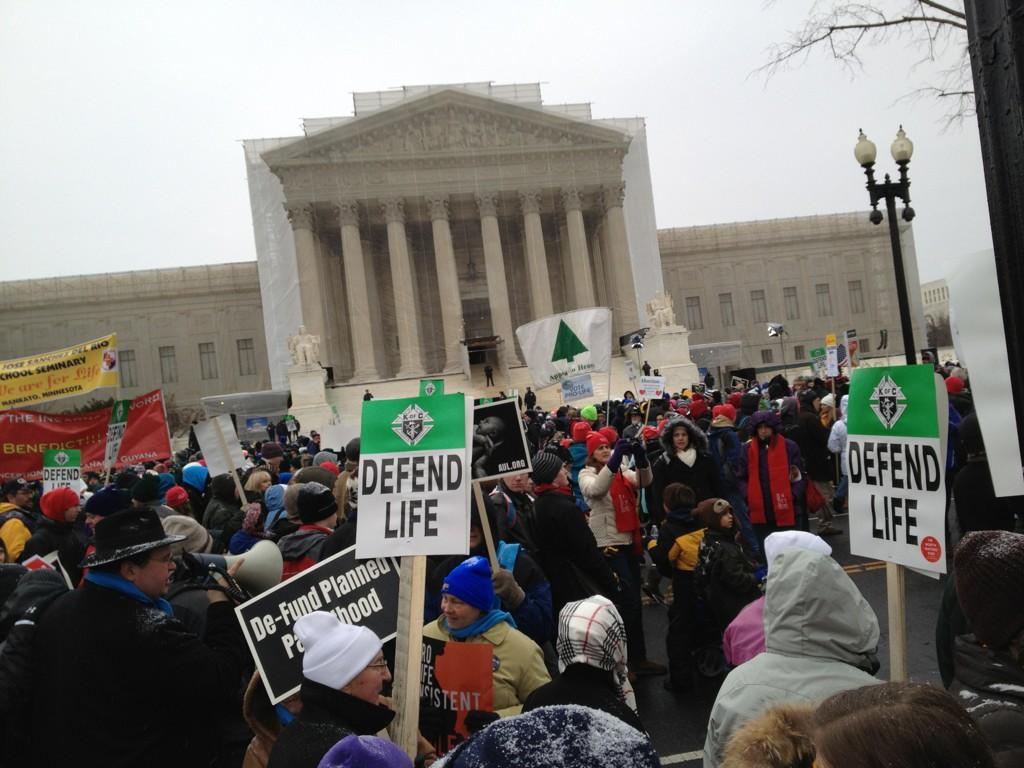 A cradle Catholic, I chose to write about abortion for a high school English assignment. Bold and confident, I stood at the front of the class, facing my peers, and passionately implored them to understand the horrible realities of abortion. Abortion clearly was not a beneficial choice for unborn babies or their mothers. How could anyone see it differently?

A child born just as the fateful decision of Roe v. Wade was penned into history, my mother courageously chose life, and would soon find herself raising me as a single parent. While Catholic grammar school instilled in me a general sense of right and wrong, some core truths were still missing in my moral education. My experiences would present a very distorted picture of reality, too. The annual March for Life didn’t even exist to my knowledge at this time.

Blessed to be surrounded by my mother’s parents and five siblings, I always felt like a cherished member of a big family, but juxtaposed with this life was the one I witnessed with my father. In his defense, he loved me and stuck around the periphery of my life, but I was deeply affected by the seeming glamour of a life lived for self. I watched the pursuit of love time and time again with different partners. I understood myself as part of that pursuit, wanted when convenient. Not surprisingly, when the hormones of my teen years revved up, self destruction lay ahead.

The truth I had espoused in high school English class was easily abandoned to the “thoughtful” opinions of the opposition. I knew good people, honest friends, friend’s parents even, who testified to the necessity for choice. A good friend’s mother even shared her own story of abortion when she, as a single mother to two already, became pregnant by a boyfriend.

And how could I condemn friends, who felt pressured into aborting their firstborn children to satisfy parents, to hide their sin or just to save themselves from their worst fears? Standing against abortion became equated to condemnation and how could a good, mature Catholic condemn the ones whom she proclaimed to love?

“Choice,” was presented to me as the mature stance to take. Busy exercising self-destructive choices in my own life, I felt its  message was empowering. And certainly it fit with the pursuit of self-satisfying love.

But as God has done time and time again through my life, He offered me glimpses of reality. Not the personal reality of my ego, but the REALity of His creation. Two young friends chose life for their son despite substantial obstacles. Their baby, Brian, came into the world bearing so many crosses: with only a portion of his brain developed in utero, he routinely suffered seizures. He was the picture of innocence and beauty wrapped up in suffering, a new reality for me. Brian came home to the embrace of a family who loved him dearly and spent his 11 months on earth swaddled in their arms. I shed bitter tears at his funeral, because I still didn’t understand the deep meaning of the Cross. Compare this experience to the “thoughtful” pro-choice messages and it’s no wonder I temporarily established myself in the latter camp.

For the past few years, my husband and I have attended the annual March for Life in Washington, D.C. with our large brood. Now pregnant and with the knowledge that my husband’s work schedule prevented his attendance, apprehension set in at the thought of braving this year’s march. Our children, in contrast, were fully engaged for battle and had their sights set on Constitution Avenue.

President Obama’s 2nd term inauguration was scheduled for the same locale less than a week before the March. I prayed that God would make evident through His creation the stark truth of that week and asked for a stormy inaugural Monday (complete with thunder and torrents of rain) to contrast with a a sunny, mild Friday for the marchers. (Obviously, personal comfort was steering my prayers, too.)

Before the rising of the sun, I boarded the bus, flanked by my children and a few extra teens. The day’s forecast was dismal. Not one of my preferences manifested, except perhaps that I was able to plant my pregnant bladder near the bus rest room. Entertaining a four-year-old on a bus for four hours requires much patience (which was in short supply). And bus seats are only comfortable for about two hours at best.

Because we were traveling with a group, we had to keep up with a less than family-friendly pace throughout the March. While the sun shone on inaugural Monday, snow fell amid freezing temperatures on Life Friday.  Even our hand warmers failed to stave off the biting sting at our fingertips. Navigating a stroller along with three young ones and four teens through a sea of shoulder to shoulder strangers is a nerve-wracking feat. (I apologize to marchers who suffered clipped heels and rolled-over toes during my defensive stroller driving.)

Plans to stop and warm up with hot chocolate along the route were canceled, so by day’s end I was trying to comfort a teary, shivering six-year-old while straining to hold a crying four-year old, not to mention the whining eight-year-old. More frustrating, I couldn’t answer the question as to when the day would end and the bus would open its welcoming doors.

The ride home was equivalent to torture. Overtired kids fighting sleep, bus seats as comfortable as concrete slabs, temperatures in the rear of the bus now equal to a sauna, and pregnancy hormones overriding all sense of inner peace…with our journey then ending in a church parking lot hidden under an inch of solid ice, I promised myself I would never, ever do that again.

The next day, however, left me refreshed and inspired me to take a second look at our experience. I had thought a day of ease would represent the same meaning as a day of suffering. But an empty, decorative cross is not the same as a crucifix. As the crucifix represents agape, that sacrificial love that Christ gave to us through His suffering and death, so too our day of redemptive suffering bore out a deeper understanding of the reality of the battle we are engaged in. Abortion is a horror, an abominable act of violence waged against the most innocent among us. There is nothing sanitary nor incorruptible about it.

Afterward, it seemed obvious that the March for Life shouldn’t be an easy offering, especially this year. Forty years and 55 million lives shouldn’t be marked by a sunny day filled with smiles, cookies, and hot chocolate. I wept when first confronted by the images of aborted babies, so it was appropriate that I should have been surrounded by weeping as I marched in their defense. Like Christ’s suffering, ours gave witness to our convictions and called us to focus less on self and more on the battle for others. It especially allowed me to teach my children, through actions and not just words, that love is sacrificial and that we don’t just give when convenient.

There was greater power to be born out and witnessed by the day’s suffering this year. There was redemptive suffering, which only Christ fully understands. There was the witness to our fellow brothers and sisters that shows our deep-seated commitment to the pro-life cause, unlike my shallow-rooted high school testimony. With this kind of spiritual power, the March has understandably been ignored year after year by the mainstream media.

Providentially, this year’s March for Life fell on the feast of St. Paul. The truth is, President Obama is every bit the sinful man that Saul once was, but he has the potential to become as great as St. Paul. He needs our prayers for his conversion of heart, not prayers for rainy days.

There is a battle to be fought for the unborn, a battle for life and for Christ. The armor is heavy and uncomfortable, the journey is long and treacherous. Our efforts will be ignored, mocked, and distorted. None of that matters, because Christ is already the victor. But in the meantime, we must “soldier up.”

Will I attend future Marches for Life? I pray that they will be celebrations of victory instead, but until then, yes, I will.

Will I have all my kids in tow? Yes, because I want their pro-life hearts to be rooted in reality.

Will I see you there? I hope so! And if I happen to run over your toes with a stroller, just think of it as your offering of self.

Tara Brelinsky lives with her husband, Greg, in North Carolina. When not marching for life, she’s busy raising and homeschooling their family of seven (so far!) beautiful children. The Brelinskys, who have been married for 20 years, are natural family planning instructors through the Couple to Couple League.

2 Replies to “Carrying the Cross Into Battle”