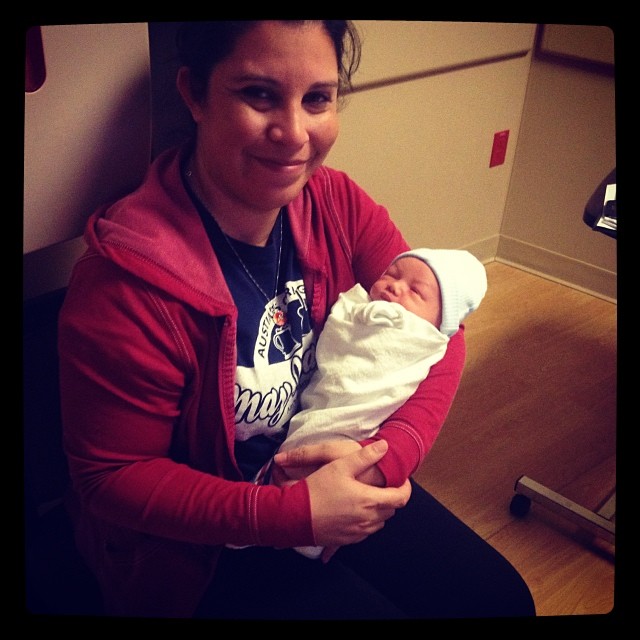 This week’s Quick Take features a friend and fellow blogger, Leticia Adams. She is a former pro choice supporter turned pro life. Her story of conversion into the Catholic faith and onto the “pro-life” side is nothing short of inspiring. Leticia, like many who are pro-choice, was convinced that abortion is a personal choice, and more so, believed that Planned Parenthood was helping women. Her priests convinced her of the dangers of Planned Parenthood through pro-life homilies, and suggested she meet with Elizabeth McClung, a pro-life activist. Leticia’s pro-life adventure began shortly after, and she now spends a lot of time in peaceful prayer on sidewalks outside abortion clinics, available to counsel women against abortion, in Texas. Leticia is a parishioner at St. William’s parish in Round Rock, Texas.

How long have you been involved as a sidewalk counselor?

I was trained as a sidewalk counselor by Elizabeth McClung, about 3 years ago. At the time, I felt that I was being called to the ministry because I had been a teenage mother myself, and I knew my experiences could help the women facing unplanned, crisis pregnancies. After I came to the realization and truth of abortion, through books and photos, I had a great desire to be on the sidewalk.

Most of the time on the sidewalk,  it is quiet and I just pray. If I see women go in, I try to talk to them, but for me, I realize that shouting at them isn’t very effective. So mostly I pray.

That is where I saw that truth for myself. No girl is going into that building with a smile on her face. I have seen the guys who take these girls just drop them off and the clinic workers just put them outside when it [abortion] is over to wait for their ride. I saw a girl throwing up outside a clinic once and nobody cared. I couldn’t go and help her because it would be trespassing, so I called the clinic to tell them and they said that it was none of my concern but they never came out to help her either.

What has been the most challenging aspect when you are on the sidewalk? Does the pressure of the situation ever get to you?

Pride is the hardest thing. To think that somehow if I don’t say or do the right thing then the baby is going to die, or that it’s because of me that the baby’s life is saved. I realize it is not me at all. Every mother makes the decision by herself, and is responsible for that choice. I can only offer the mother resources, and allow God to talk through me, but in the end, it is the woman’s choice that she will have to live with. I can only make myself available.

There are times when taking care of my family must take priority over going out on the sidewalk and it is a reason that I have cut back my time spent out there.  It is very hard to step away because like I said, I suffer from the pride of thinking that I HAVE to be there or babies will die. God is in control, He has plenty of people who are helping moms and babies.

What has been the most rewarding aspect?

It is the smiles on the moms faces, once they have decided against abortion and have chosen life. I have two girls who I am really close to. I am so proud of these girls, they both had appointments to abort their babies. One of them even after seeing the sonogram and finding out that she was having a girl. Both women have recently delivered their babies… one boy and one girl!

The most rewarding part is having them say they are grateful for my support because I know that I’m grateful for all of those people who supported me.

At one point, you were a pregnancy consulate for the John Paul II Life Center. How did that gig come about?

I saw a post on Facebook that there was a position open at the John Paul II Life Center for pregnancy consultant. I really wanted the job, so I applied and got it. It was the best job that I have ever had. I loved talking to the girls. I loved telling them about my life and my grandbaby so they could see that there is always hope; that everything will be ok. I am no longer there because I was not very good at the office stuff. The director needed someone who could help her more than I could. I really just wanted to talk to the girls, but there is more than that to running a PRC.

How has the recently passed law in Texas affected your work?

It didn’t really have time to affect anything I was doing, since I had left the Life Center before the law went into effect. But, I was present both times when it was being passed, and it was a very sobering experience. I learned more about the polarization that is being created by the issue of abortion and I stood in the middle of a “Us versus Them” crowd, with both sides shouting at one another.

I realized that if we are going to say that we are pro-life, we have to respect ALL life, not just that of the unborn. I listened to countless women yell about their abortion experience; both those who regretted it and those who thought it was the best thing they had ever done, and I realize that we do not listen to one another enough. I heard some of the craziest accusations from both sides about the other. It is really something that I will never forget. It changed how I talk to pro-choicers. I can disagree with them all day long on the issue of abortion but the second that I don’t talk to them with the respect owed to them as human beings, I have failed. I have failed before to respect their dignity and that is what this fight is really all about, the dignity of the human person.

There is not much going on right now that I am aware of, but I might just be out of the loop since I have taken some personal time away to be there for my family and to begin writing a book. Pregnancy centers are always looking for volunteers and resources, so it is good to get involved.

Information for the 40 Days for Life campaign and upcoming life chains in your area can be found here.

Leticia and one of the babies she helped to save from abortion: 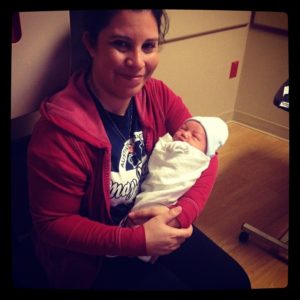