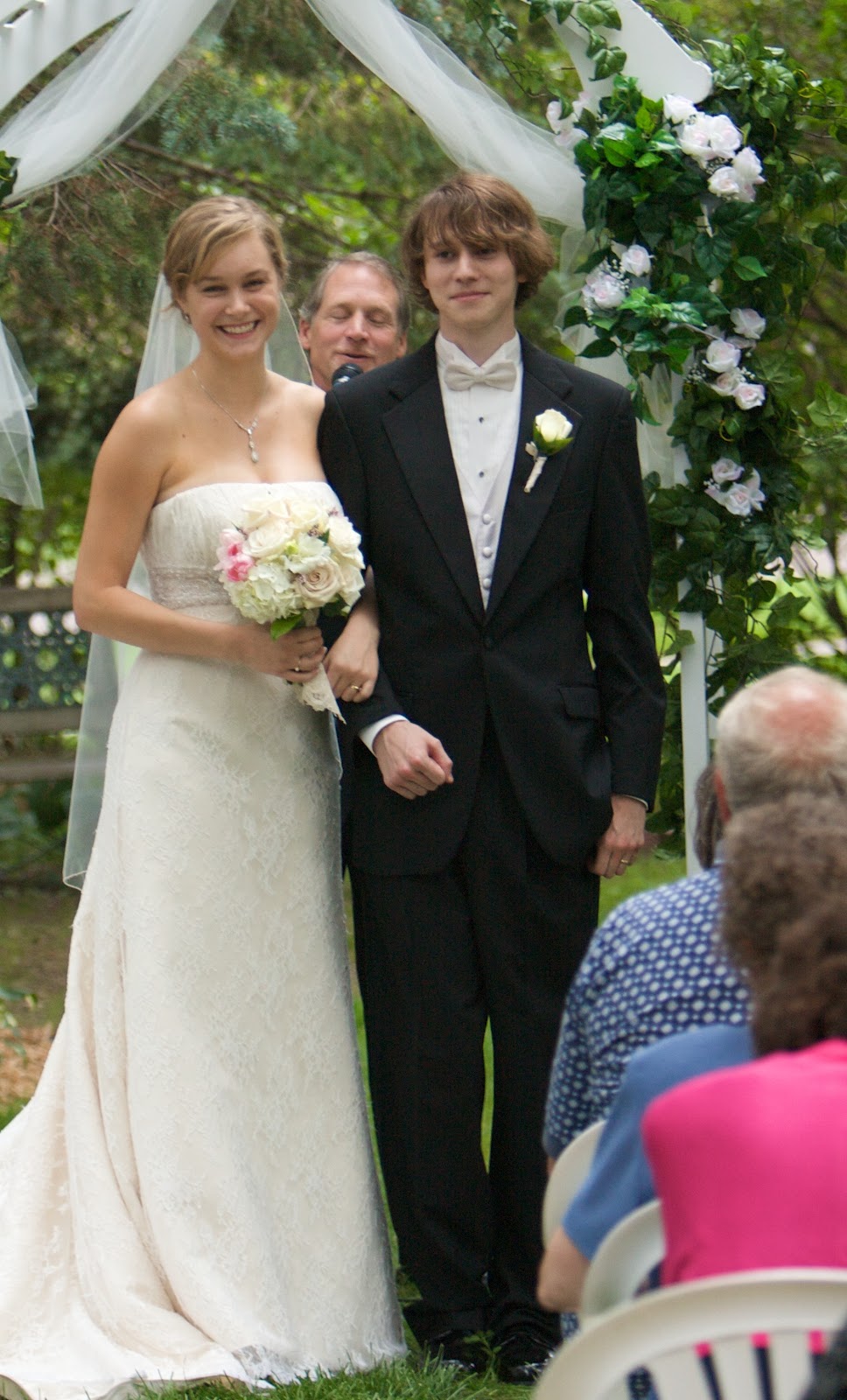 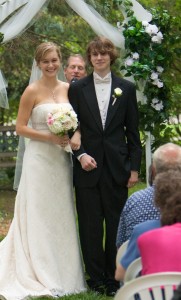 My wife and I married the summer before our senior year of college and conceived a child just a few weeks later. On purpose. And it was one of the best decisions of our lives.

We actually sort of fell into it all. No, we’re not from a strange cult, and neither of us were pressured by our parents to do what we did (I can assure you we received opposite pressure). Not too long before, we almost certainly would have said we agreed with the conventional wisdom that marrying and starting a family while still in college was a bad idea. But then we fell in love.

The powerful winds of romantic love compelled us to get engaged with the plan to get married the summer before our senior year. But as I’ve written elsewhere, we did so with the implicit plan of contracepting (everyone does, what else would we do?). While trying to determine which kind of contraception to use, we came across Catholic arguments against it, and, to our own surprise, were convinced that the use of contraception is immoral. We were fine with natural family planning, but we were also convinced that the primary purpose of marriage is family and should only be avoided by a married couple for good reasons.

In any case, we ended up very joyfully deciding to simply be open to having kids from the beginning. If we had not planned on using contraception originally, we probably wouldn’t have gotten engaged when we did, but like I said, we sort of fell into the whole thing.

All this is to say, neither of us set out to be young married parents. But by God’s grace, I’m very proud to say that, with my 26th birthday coming up next month, we’ve been married four and a half years, we have two children, and a third one is due this summer.

And it’s been some of the best years of our lives! We don’t regret any of it but rather see all the great blessing we could have missed out on if we had followed the normal cultural path and (possibly indefinitely) postponed marriage and children.

Here is a non-exhaustive list with four reasons why it was a great decision:

1) We are getting to enjoy our sexual primes together in a healthy, fulfilling, and constructive way.

Young people have sex drives. This is a great thing! So it’s sad that our culture is basically designed to ensure one’s sexuality is frustrating, empty, and/or destructive.

Education extends far past physical maturity, making it practically difficult for people to make normal use of their sexuality by getting married and having kids. But people still have sex drives, so they fornicate, degrading themselves and using others. Despite people’s best efforts, sometimes the procreative act (surprise!) still procreates, and women get stuck raising a child with someone they don’t love or alone, or lose hope and decide the best course of action is to kill their child.

My wife and I aren’t perfect, but we’ve been blessed with the opportunity to enjoy our sexuality in a healthy, fulfilling, and constructive way. We have the security of marriage and we’re not disrupting the natural process with contraception, so we’re letting our sexuality lead to what it was meant to lead to naturally: children. And here’s the secret: it’s all very joyous, exciting, and fun.

2) We were first time parents during our physical primes.

Taking care of young children takes an incredible amount of energy, patience, and stamina – something that will only decrease as we get older. There’s a reason God made it so most people can’t conceive children after a certain age! A couple’s first child is even more work since they don’t have experience. Lord willing, we may continue to have kids, but hopefully we’ll be able to fold new children into an already formed family culture, rather than working through the initial shock as we’re entering into middle age.

3) We used our best chance to have children, and we have a greater chance for having a large family.

There are a limited number of a years that a couple can conceive a child. The longer a person waits, the more likely it is that they may become infertile before they are able to have children. By starting young, we gave ourselves the best shot at having children in the first place. And since we have many reproductive years ahead us, we at least have a chance at having a large family. If we had started ten years later, that may have not been an option even if we wanted it.

4) We have direction and responsibility.

“Adults don’t make babies, babies make adults,” the old saying goes, and there’s a lot of truth to that. Although people should obviously have a certain amount of maturity before getting married, it’s true that marriage and family have had a very positive maturing effect on us. Taking care of children is an incredibly huge responsibility, and one that can’t be compartmentalized. Raising children requires sacrifice in every area of one’s life – and that’s a good thing. That’s the paradox of love. 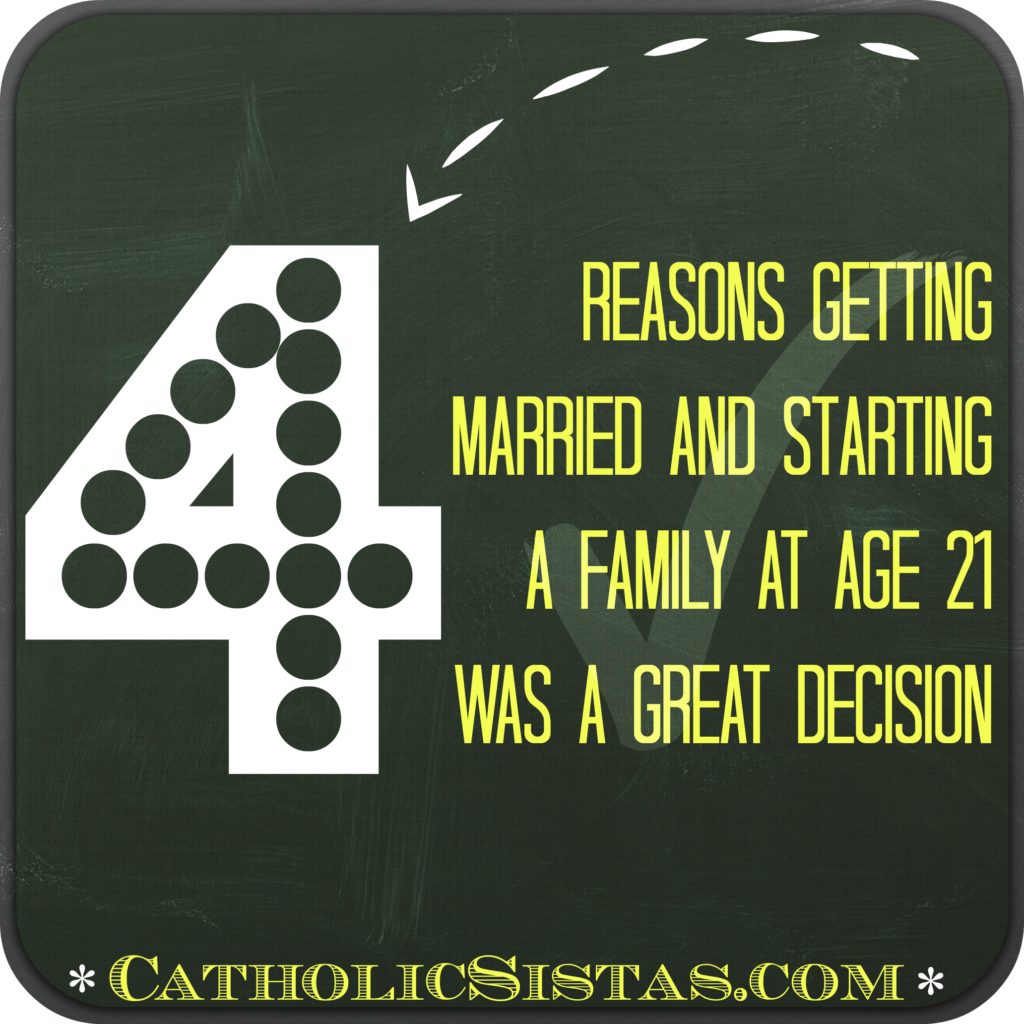