Election season is upon us. We’ve already been treated to debates among the potential Republican nominees and poorly-veiled campaigning by the current President, and we have just under a year left ahead of us for more debates, town hall meetings, questionable campaign promises, and attack ads on television. But don’t worry – this post isn’t about who should win the Republican nomination or why the Republicans need to beat Obama in 2012. This post is about a topic that transcends partisan politics. Something that has infected our entire political process. Something that we take for granted as simply being “par for the course” around election time. That “something” is an offense against the Eighth Commandment, called “calumny.”

I’ve found that “calumny” is a little-known word, even among Catholics. I know that I had never even heard the word until sometime within the last few years, and when I told one of my Catholic friends that I was writing about calumny for the blog, she responded “calumwho?” It may be an unfamiliar word to many, but it’s not an unfamiliar concept, I’m sure. It’s essentially the same thing as slander or libel. The Catechism of the Catholic Church defines it as making remarks contrary to the truth, which are harmful to the reputation of others and give occasion for false judgment of them. “Calumny” is the appropriate word for so much of what people say about Catholics and especially about our Church leadership (for example, “Pope Benedict is/was a Nazi” – a charge which couldn’t be further from the truth).

Calumny is related to rash judgment and detraction because they are all offenses against truth, and more specifically offenses against the respect that we owe to the reputations of others. They violate the overarching command to love our neighbors as ourselves. I find it interesting that the Eighth Commandment, which we all take to encompass all types of lying, specifically names the kind of lying where you speak an untruth against your neighbor. This is a serious sin, and we need to take heed! 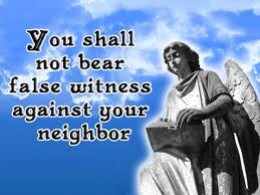 I may not need to connect the dots for you, but in case I do, this is related to election season because, unfortunately, a lot of what passes for “campaigning” among political candidates these days is nothing more than mudslinging, which often involves calumny (in addition to both rash judgment and detraction). Candidates on both sides of the party line actually seek to damage the reputation of other candidates. I believe that some “dirt” that is “dug up” against candidates is fabricated whole cloth for the sole intention of destroying their chances to be elected; other times, partial truths are twisted into untruths. It’s not just candidates who do this to each other, sadly. Sometimes this happens via the large portion of people in the mainstream media who are not so much concerned with truth as they are with their personal ideology.

I promise that I am not writing this post for the purpose of pointing fingers at political candidates and mainstream media members. I began this post talking about politics because I thought it was an extremely accessible application of the principle of calumny – something we could all understand. To be honest (which is important in a piece on the Eighth Commandment!), I foolishly failed to see it as a sin that would be easy for the average good-willed person to fall into, or a sin that I personally struggled with. Oh how naïve I was! After starting this piece, I suddenly realized that I am much more tempted toward calumny than I had thought I was, and I bet it is something that we have all struggled with.

It’s true that I am very unlikely to fabricate out of thin air a story about someone and then spread it around to damage their reputation. I despise outright lying, and am much more tempted to commit detraction (sharing true but damaging information about other people). But how likely am I to share second-hand stories about others (especially regarding politics) without honestly assessing whether the stories are true? How likely am I to jump unthinkingly on the chance to help damage the reputation of a person who I think is undeserving of a good reputation and needs to be “exposed” for who they really are? The answer to those questions is that it’s more likely than I’d like to admit. And if I were to spread around a second- hand story about someone without concerning myself too much with its truth, and with the express hope of making people look askance at that person, is that really very different than fabricating a story myself?

I want to tell my readers not to worry about my being tempted by this sin, because at least I am only tempted to do it because of good intentions! I’m not like those other people who commit this sin. The only time I would ever spread around a damaging story without caring about whether it was true is when there is a good reason! People need to know who these people really are – and even if this or that particular story is untrue, that doesn’t mean that what it says about the person is untrue….

That’s what I wish I could say to my readers. I wish I could say that my sins aren’t really sins because I have good intentions. I wish I could say that I am so much better than the people who commit the same sins with much more nefarious purposes in mind. It’s so easy to point fingers at other people who we think are committing sins out of pure evil or selfish intentions, and whitewash over our own sins because of the fact that we think we are committing those sins for a good reason. But then we aren’t being honest with ourselves, are we? We aren’t remembering that Scripture and our Catholic faith teach us that we can never do something evil for the purpose of bringing about good. Getting back to the political theme, even if Candidate A is truly a wolf in sheep’s clothing, Candidate B cannot make stuff up about him in order to ensure that he does not win the White House. And I cannot uncritically pass on that made-up stuff because I want everyone to know just how evil Candidate A is.

It can be so tempting to think that we must stop at nothing in order to ensure that this or that candidate does not have control of the White House – especially when millions of human lives are on the line, as is the case in the fight against legal abortion. At those times that we are tempted, we’d do well to remember who the “father of lies” is, and Who the Truth is. How can we ever hope to be victorious for the Truth when we are using the tactics of the “father of lies”? The reality is that we cannot hope for that. It’s nonsensical to think that we will beat satan by breaking the Commandments given to us by our Lord. Scripture tells us that the Truth will set us free! We have to place our trust in that – in HIM – even if it means that we have to endure periods of time where great evil is being done in our nation. When we resort to using sinful means in order to bring about a perceived good, we have given up true hope and trust, and despaired of the power of God. We have grown impatient and decided that He isn’t working fast enough and that we have to step in and get the job done more quickly. We have sacrificed the health of our own immortal souls for some lesser good. 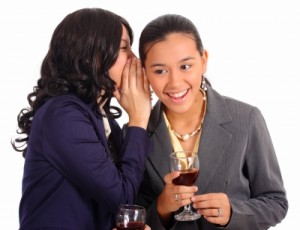 But if I’m being REALLY honest with myself, I also would have to admit that my sins aren’t all committed for noble purposes (shocking, I know)! There have been times when I have been tempted toward calumny for purely selfish reasons. How often have I at least wanted to embellish a story about someone or, as political candidates sometimes do, to twist a partial truth so much that there was barely a semblance of truth left by the time I was finished – all for the purpose of making myself feel better or look better in someone else’s eyes? How often have I actually followed through with it? How often have I let my emotions overshadow my love for the truth, such that I convinced myself that something negative about another person was true when I knew deep down that it wasn’t – and then shared that “truth” with someone else because I was hurt or angry?

Again, the answer to those questions is “more often than I’d like to admit.” It appears as though calumny is a sin that is easier to fall into than I had thought. So, I need to be on guard against it, as do we all – especially because calumny can be grave matter and thus can constitute a mortal sin (depending on how damaging the untruths are to a person’s reputation and whether the other usual conditions for mortal sin are met).

One of the best ways to avoid both detraction and calumny is to have a general rule not to gossip or talk badly about other people. I know – it’s so easy to fall into the trap of gossiping, or “venting” when someone upsets you, especially if you are surrounded by people who have no qualms about doing those things.  But through the grace of God (and, practically speaking, the avoidance of near occasions of sin), I believe we can conquer any sin that tempts us. We have to pray for that grace to overcome the urge to do injustice against our neighbors (even when we think they really really deserve it!). We have to pray for a zeal for the truth.

As we enter into the New [Liturgical] Year, let us resolve to be more mindful about how we can honor the truth and love our neighbors as ourselves (yes, even the neighbors we dislike), and to avoid occasions of rash judgment, detraction, and calumny. As we tidy and decorate our homes in preparation for Christmas festivities, let us clear out the cobwebs in our hearts and souls and prepare our spiritual houses for the coming of our Savior!