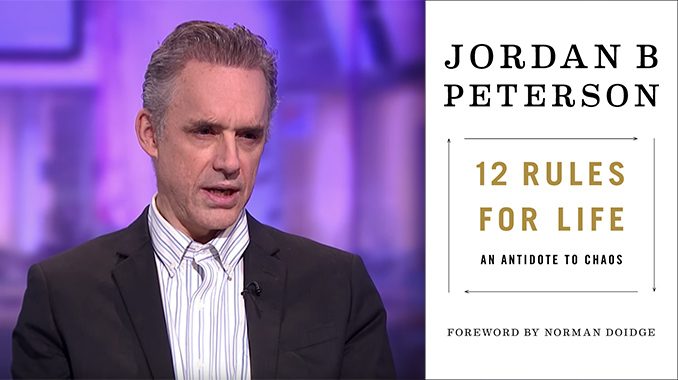 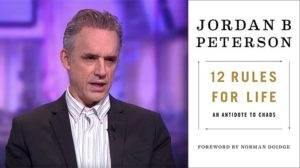 As I looked into the eyes of the woman throwing me a lifeline, it occurred to me that she was talking to me, not to others in my life. Quickly the urge to get up and fight dissolved into the desire to be still. Be good to yourself, she encouraged me.  Sometimes when the world won’t or can’t give you what you need or deserve, you need to give it to yourself. Take a timeout or hot bath. Go for a walk. Treat yourself to a quiet cup of tea and a scone. Visit a friend. Be good to yourself.

As women, we know we are soooo good at putting others first and neglecting ourselves–until we just can’t anymore.  Until someone takes advantage of us. Until discouragement and resentment rear their ugly heads and we snap. So much for Christian witness.

This is Jordan Peterson’s advice in Chapter 2 in his book, 12 Rules for Life: “Treat Yourself Like Someone You Are Responsible for Helping.”

Peterson begins with the fact that we often take better care of our pets than ourselves. Ouch. In true philosopher style, he puts this current dilemma in the perspective of human history: today, our worldview is decidedly scientific and material. What can be measured and objectified is reality. Everything else is dismissed as superstition.

But as Peterson points out, for millennia humans have understood the “most fundamental elements of human life” to be subjective experience (emotions, dreams, pain, and joy). This is the stuff that best expresses the truth of existence. This is why the Bible was written in story form, as opposed to how we would likely record “Truth” today as a series of facts (names, dates, places and times).

Peterson presents the problem of pain as an argument that the subjective is reality. He dares us to consider that “pain matters more than matter matters.” Been there, done that. Has anyone ever tried to talk you out of your pain? Subjective, yes. Real? YES! Suffering, Peterson says, is “the irreducible truth of Being” we are still trying to understand.

As humans in this material world, we are uniquely created to operate in both the physical world (the domain of order) and the immaterial world (domain of chaos). We are both bodies and souls. Interestingly, Peterson points out that order is traditionally associated with masculinity and chaos with femininity. (He’s obviously never been to my house–I live with three males and creating order feels like my life’s work. As Barbara Bush described it: it’s like shoveling the sidewalk while it’s still snowing.)

This part hurts my head: Peterson says we have a “primordial knowledge of structured, creative opposition.” This knowledge, such as parent/child and male/female, predate humanity and major world religions throughout history have understood and illustrated this opposing tension:

According to Peterson, we live in this tension and attempt to walk with a balance that promotes unity.

Enter: The Fall of Adam and Eve and the source of all our pain. Human beings have consciousness and free will. We are uniquely created to move through the material world by using our physical bodies to choose to either obey or disobey how God intended us to behave. The rest of creation did not get this gift of free will.  It is a gift I sometimes want to give back to God; sometimes I just wish he would just make me do what I ought.  It’s a brave prayer. The rest of creation must follow the laws of nature. Try telling a tree that it ought to not bloom when we have a couple weeks of mild weather in the middle of winter. Or holding the tree responsible when the premature blooms are destroyed when winter returns. Ridiculous, right? No more ridiculous than refusing to acknowledge that we ought to live by the Supremely Good Rules of Behavior God made for us.

C.S. Lewis referred to these spiritual rules of behavior, rules that govern actions not objects, as “Laws of Human Nature.” And failing to obey them has real consequences for ourselves, for others, and for creation. Sin, which is separation from good, happens as a result. To fail to accept these Laws of Human Nature is as ignorant as refusing to believe in the law of gravity and the consequences of disobeying it.

What is Wrong with the World Today?

Are you, too, feeling misery and pain because of the fallen nature of humanity? Are you overwhelmed with the state of society? “We have seen the enemy, after all,” Peterson says, “and ‘he is us.’” Amen. When G.K. Chesterton was asked 50 years ago what was wrong with the world, his answer was, “I am.”

Wow.  Imagine that response in the Garden of Eden. What would the world look like if we all accepted responsibility for our actions? If we concentrated on the beam in our own eye instead of the splinter in another’s?

While Peterson’s rules can sound cliché and I sense a real danger of too much talk of “self,” I still find them helpful. Have I created tyrants in my life by allowing others to mistreat me? Am I my own worst enemy and the biggest tyrant in my life? “It is not virtuous to be victimized by a bully, even if that bully is oneself,” Peterson says. Be good to yourself.

What I find missing most is the Christian perspective. How does one discern when to stand up and fight and when to let something go? What is the best way to confront bullies and tyrants in a way that doesn’t divide us into us v. them, winners and losers, or those who are good v. those who are bad? How do we know if the cross we are carrying is truly Christ’s or whether it is one of our own or another’s making?

If 12 Rules for Life reads like a psychological self-help book, we should not be surprised. That is exactly where you’ll find it in the bookstore. While I miss the more in-depth discussion of how these rules fit in with the daily Christian walk, they certainly challenge me to think about it.

What are your thoughts, readers?

Be good to yourself.  Set some goals for yourself today and don’t forget to reward yourself for accomplishing them. Start small!