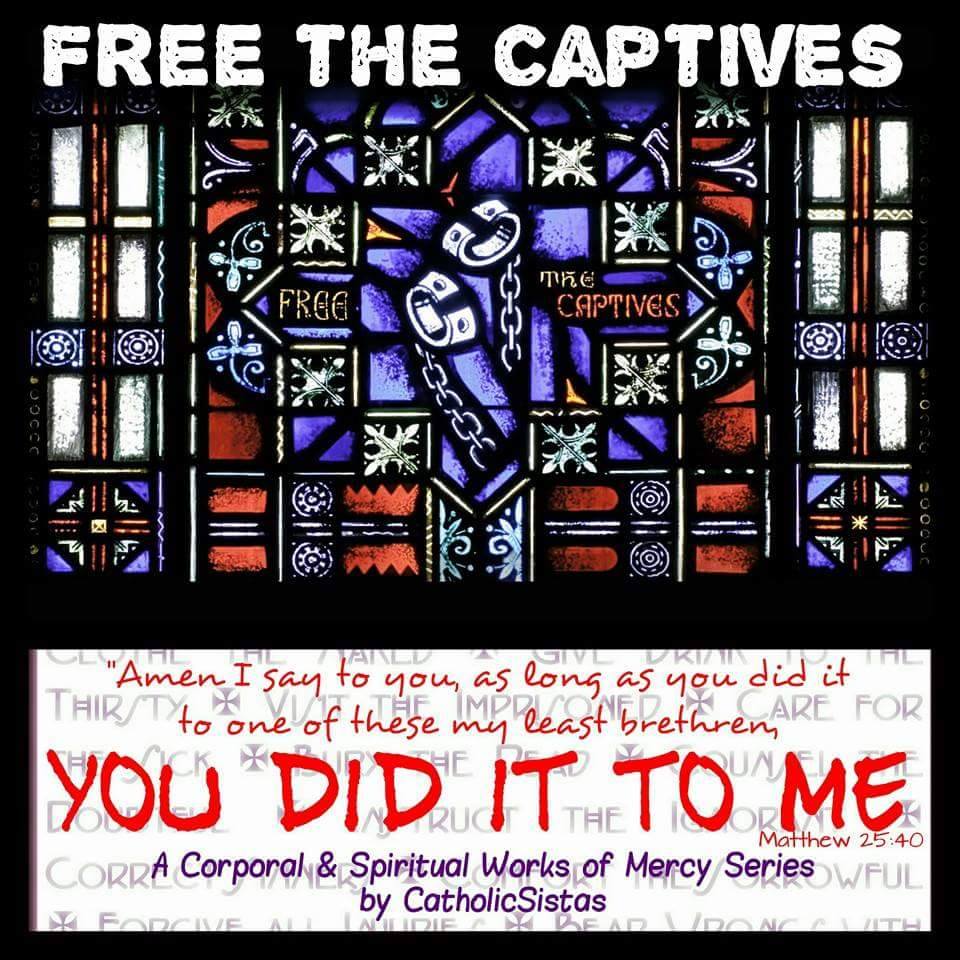 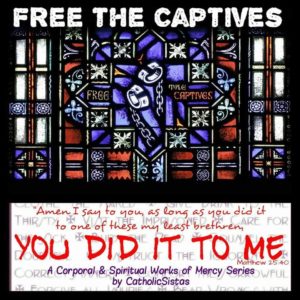 A day after I agreed to write about this topic, I thought about it for a minute and part of my brain went “wait, what did I sign up for?!? What am I going to write about?” The closest I’ve ever come to visiting someone in prison was when I toured the local police station with my Moms club and got a picture of my two kids chilling with some friends in the cell there. My husband and I have talked about someone we know who regularly does prison ministry, but have never really considered doing it ourselves. So as I considered what to write, it was from a position of essentially zero experience or knowledge about actually visiting prisoners.

(yes, I know there are other ways of interpreting “the imprisoned” as meaning those imprisoned at home by infirmity, in their own minds by mental illness, or in a poor situation of life, for example. I also know that, depending on where you find a list of the Works of Mercy, sometimes this one is listed as “Free the Captives,” including the image made for this post by our awesome graphics gal! But I’ve always learned it as “Visit the Imprisoned”, and wanted to approach it from a more literal viewpoint of actual prisoners. Disclaimer over.)

I don’t think this visit qualifies me to pontificate about visiting prisoners!!

But then one day, right in the middle of Mass (far from pondering this post, I was focused on the fact my nephew was about to receive his First Communion!), some thoughts and ideas just hit me, and I admit I grabbed pen and paper from my purse and jotted down a few thoughts during the homily.

As I mentioned, my husband and I have discussed prison ministry several times, and most of the time our conversation only serves to illustrate the two main approaches to the imprisoned. The interior conflict I feel when I consider helping with prison ministry is really a struggle between these two “sides”:

It can be so difficult to balance Justice and Mercy, especially when we read stories of people who were given a merciful early release from prison who then went on to hurt more people and land back in prison. Or when we see some people who are strongly called to prison ministry seeming to argue that if an individual repents and turns his life over to God, that perhaps his civil penalties ought to be lessened. It is natural to want a full and tough punishment (or vengeance) for the perpetrator when we hear about horrible crimes against children or the defenseless, and it is so difficult to get past that to the point of being able to offer them even the tiny mercies of a kind word or a smile, let alone the great graces and mercy God offers us all.

I could quote bible verses about vengeance being God’s, or about his Justice and Mercy. I could cite passage from the Catechism about how prisoners should be treated, or the value of every human being. Several ideas such as those came to me that day in Church, and I had several possible posts half-written in my head to choose from. But the final thought that hit me that day erased them all. Because I realized I had been lost. And not lost in any major way, but simply at a loss as to what to write for a blog post. Not exactly earth-shaking, and I had volunteered for it, after all. But God cared. He cared that I was afraid of looking foolish, and he helped me see several ways to intelligently and thoughtfully approach the topic.

He had Mercy on me.

And while I intellectually realize it is a tiny action of Mercy compared to the fact that he offers forgiveness for all my sinfs and eternal Joy in Heaven, this tiny Mercy was easier to wrap my brain around. And it dawned on me that visiting a prisoner was a similarly tiny act of Mercy. Prison ministry doesn’t require a laying down of my life, but perhaps only a few hours of time and a willingness to simply be a conduit for God’s love. It doesn’t mean breaking out that murderer or drug dealer or convincing myself or others that they are good men, but offering them the knowledge of the amazing invitation God offers to each of us, to be His. Helping them to find that greater freedom that God wants for every one of us. 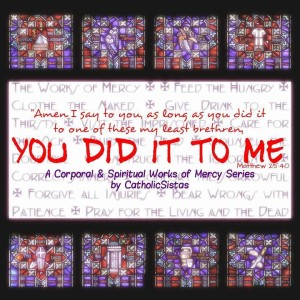 How selfish of me to keep that to myself when we have been given so much Mercy, even to cover such minor needs as what to write in a post. While it is human to want Justice and punishment, God’s grace and Mercy can and should flow through us to others, regardless of whether we believe a person deserves even a kind word. And as the Spiritual and Corporal Works of Mercy are really all about sharing God’s Mercy with our fellow man (even though none of us deserve it), we must strive to offer that Mercy most especially with those who least deserve it.

Will I be joining the prison ministry in our area?? Probably not. I have other ministries that I feel much more called to. But I am much more open to it now, and have added prisoners and prison ministers to my daily prayer list. Even if it is only in context of a discussion with a friend or loved one, it always helps me to realize that I deserve death for my sin, but have received God’s Mercy. And that now I have a responsibility to offer that same Mercy to others.

What about you? Have you ever visited (or freed!) a prisoner?? What was it like? Do you agree with my thoughts on it??