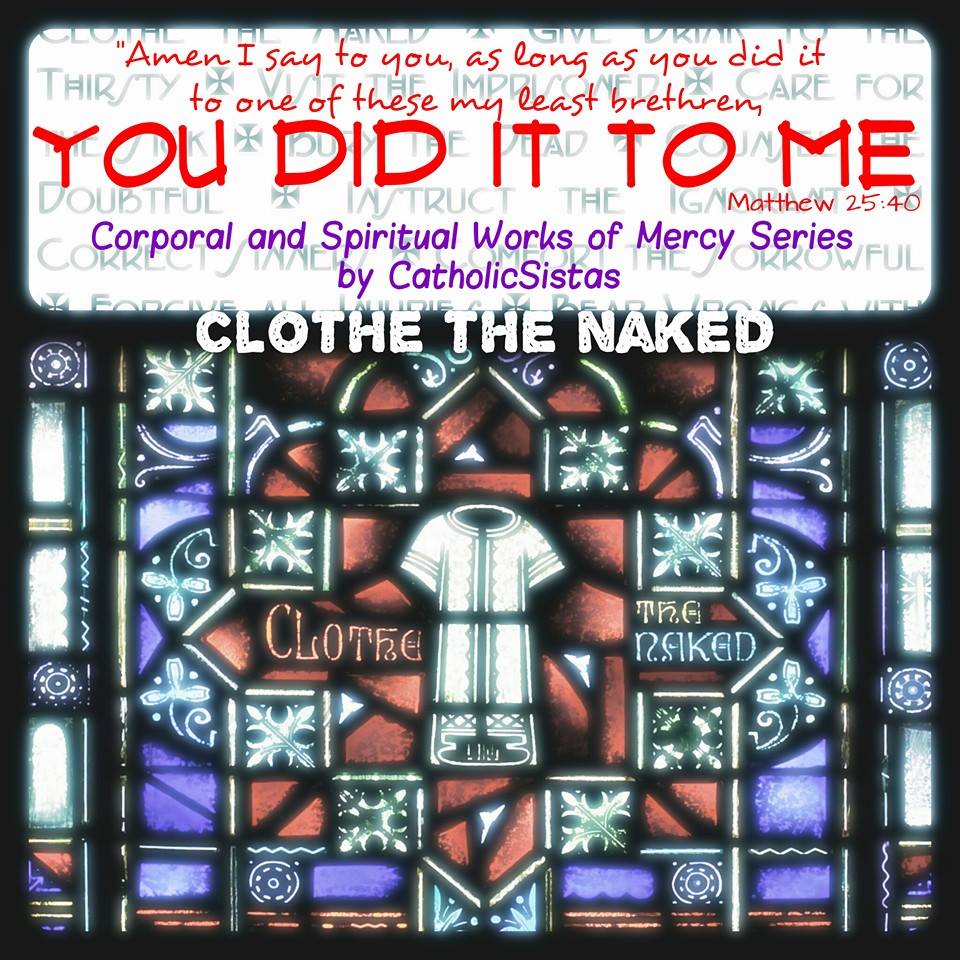 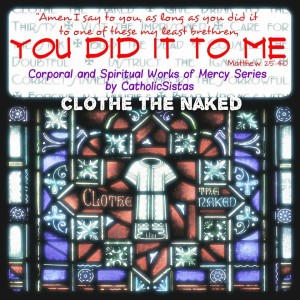 In the prosperous Western world, clothing is something most of us take for granted. We think that “having nothing to wear” means that the clothes in our full closets do not look good enough on us, are not right for the occasion, or are “so last season.” In our consumerist society, we are told that we have to dress a certain way, and as that way is ever-changing, we are constantly in need of new clothing to keep up. For most of us, the idea of literally having nothing to wear, or even having nothing that is clean, appropriately-fitting, and in good condition, is foreign to us. And even as the needy people we might encounter are almost never literally naked, we might not think that much about the corporal work of mercy of clothing the naked and how it applies to us (at least, not beyond getting our little children dressed in the morning). We probably aren’t just asking ourselves when we saw Jesus naked and either clothed/did not clothe him (as those at their Judgment ask in Matthew 25), but when we saw anyone in need of this act of mercy . 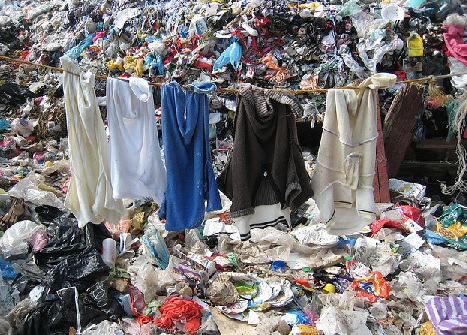 When we are cleaning out our pantries, we might think of those without food and take a bag of cans-we-never-used to our parish’s food pantry. But what do we do with those old clothing items that we feel like we have to replace because we got tired of wearing them or because they are no longer considered “in fashion”? I read an article about the fact that clothing is clogging up the landfills. It wasn’t just talking about those articles of clothing that are holey or worn too thin, but clothing that is actually in wearable condition. It even mentioned that a major clothing retailer throws away perfectly usable, brand new clothing (after ruining it so no one can take it out of the garbage, I guess). Meanwhile, there are people in our own backyards (and certainly those in other countries) who cannot afford to replace their too-small pants and their sneakers with the large holes in the soles. Perhaps they aren’t literally naked, but their clothing is not adequate. Pope Francis said that when we throw away food, we are taking it from the mouths of the poor. I wonder what he’d say about throwing away useful clothing. I imagine he would think it were equally unjust toward our brothers and sisters in need. There are drop boxes for clothing donations popping up all over the place now. You can simply bag up the stuff you want to get rid of and take it to one of those drop boxes rather than throwing it in the trash, and someone else takes care of the “heavy lifting” of actually distributing it to those in need. So, none of us really has an excuse for throwing away clothing that can still be worn.

I read another article recently that encouraged people not to give the poor their “leftovers” – in this case, those pieces of clothing that only have a little bit of life left in them it or ones we’d be embarrassed to offer to a friend or family member. Although that old saying that “beggars can’t be choosers” has some usefulness to it (like when my four year old is begging for snack but tries to turn down what I offer her because she wants something else), it should never be used as an excuse to treat those in need as if they don’t deserve the same things that we deserve. Clothing is a symbol of our human dignity. It is one of the things that set us apart from animals. And it’s within our fallen human nature to think that people with nicer clothing are somehow more dignified (even though it’s untrue). So in thinking that clothing we would never be caught dead in, and would never want our friends caught dead in, is “good enough” for the poor, we might be unconsciously feeding into the idea that they have less dignity than we do. Although I think that even our “castaway” clothing should be donated rather than thrown away as long as it is still wearable (because ugly or old clothing is better than nothing), I agree with the idea that we should strive to think of “the least of these” as worthy of everything of which we believe we ourselves to be worthy. We should think of ways we can clothe the naked with clothing that sends the message that they have dignity and are worthy of respect. 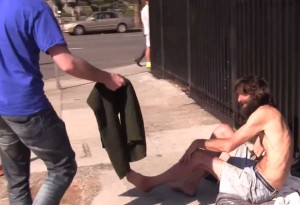 We have a faith-based charity in my city that collects clothing in one of those drop boxes and gives it directly to the city’s needy (unlike companies such as Good Will that sell the clothing that you donate). I noticed on their website that they accept all types of clothing, including formal dresses. I once mentioned off-hand to someone that I was going to donate a nice outfit to this charity, and she responded that she didn’t think the people who make use of the services of that charity had any need of such nice clothing. This person has a beautiful heart and truly cares about serving the poor, so I know she did not mean to insult the dignity of these people in need. But I think she, like many of us, didn’t really think about the fact that being poor does not mean that you don’t ever need nice things. Consider the example of someone who is trying to get back on their feet and might need a suit or a nice dress for a job interview and (hopefully) the job itself. Or perhaps someone who has fallen on hard times would just like to put on clothes that make them feel important again. Thinking more globally, I recently heard that African girls who wear nice clothing –particularly dresses- are actually safer than other girls because they are seen as being more respectable and less like “things” to be used and discarded. 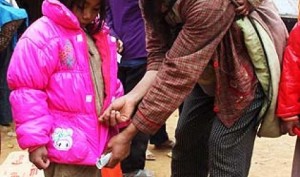 This brings me to a potentially painful point – all those kids’ clothes we are storing in the basement for a potential future child, or the ones in our own closets that are too small but we hope will fit us again one day (if we can finally stick to that diet/exercise plan and lose weight) … maybe we shouldn’t be storing those “just in case.” Maybe we should be giving those away instead. Obviously they are clothes that we like and think are worthy to be worn again. We wouldn’t keep them if we didn’t. But, they are not clothes that we have a current need for and we’re not even sure we will ever have a future need for them either. And there are people out there who do have current needs. Do we trust in the Lord’s provisions enough to believe that we will have the clothes we need when we actually need them, so we can be free to give away the ones we don’t currently need to people who actually do? This is something with which I’ve personally struggled quite a bit. The tipping point for me was realizing that, at this point, all those girl clothes I’ve been saving from my second girl will have been sitting in my basement for at least six years before another girl of mine wears them – if I even have another girl! But there are plenty of children who could use them right now. Jesus says that if we have two tunics, we should give one away. There is a voice inside most of us that says “but what if I need that second tunic in the future?!” as we panic over the idea of giving it away. But we have to trust that if and when that time comes, someone else will have a second tunic to share with us.

Adequate clothing is a basic necessity of life for more than one reason. When Jesus was crucified, he was stripped of his garments in order to strip him of his dignity – to humiliate him. When we clothe the naked, we are not only offering to them physical protection from the elements, but affirming their human dignity and worth and thus uplifting their souls.

One Reply to “You Did It To Me: Clothing The Naked”