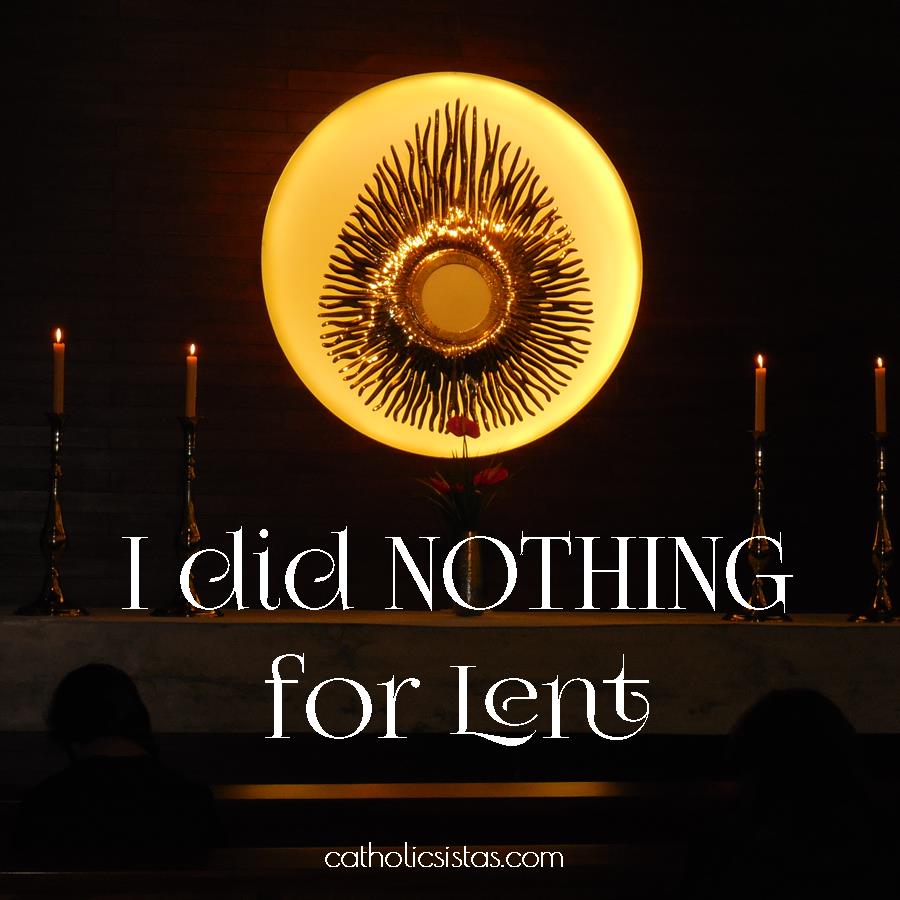 How I gave up nothing, took on nothing…and left everything to the Lord.

My Plan for an All-Star Lent

It was Lent 2014. I was a college junior, diving into my faith after my “reversion” (I’m a cradle Catholic, but my faith was rekindled that previous summer). Before my re-version, Catholicism for me had been a series of doctrines and dogmas (and man was I good at following rules…and forcing them on other people!). Even after the re-version, I was slow in adjusting from a faith that was only based on rules to a faith based on a loving relationship with Christ. So, in preparation for Lent 2014, I sauntered confidently into my meeting with my spiritual director. With me, I carried an organized, bullet-point list of everything I planned to do for Lent.

No listening to music or podcasts.

Volunteering once a week.

A scriptural reflection throughout Lent.

No snacks between meals.

I kid you not I had fully planned to do each and every one of those things. And would have, too. My spiritual director, a sweet little nun with a big smile and a quiet voice, read through the list thoughtfully. “Yes, Victory” (her very endearing nickname for me) “this is very good.” I beamed, confident in my all-star plan for Lent. “But…” (oh no, the dreaded but) “…but you’re not going to do any of this.” Straining to be humble, or at least not freak out, I replied: “Oh. What would you like me to do then, Sister?” She was quiet for a moment, reading through the list again. “Victory, I’d like you to do nothing for Lent.”

Nothing! The voice screamed in my head. I must’ve asked her twenty times just to clarify. You don’t want me to give up anything? Take on something? What about prayer, fasting, almsgiving? This went against literally everything I’d ever known about Catholicism since 1st grade CCD? I didn’t even think it was acceptable to do nothing (definitely talk this over with a spiritual director before you try this at home). But she was completely serious. Nothing.

We set up the parameters: I was to keep up my normal prayer, volunteer, and worship schedule. I was still to abstain from meat on Fridays. On Ash Wednesday and Good Friday, I wasn’t to cut anything out of the two small meals or one big meal. I was to do the bare minimum and nothing extra. It was…horrible. Everyone else would discuss the struggle and the sacrifice of what they gave up. What could I say? Oh, I gave up nothing? I told only a few people about it, and even then it was humiliating. “Oh you got it easy,” they would say, “I’m so jealous.” And that’s what I hated! I was taking the easy way out. I felt that Christ suffered and died for us, and there was nothing I could do about it.

Christ Gives Us Everything

I carried these feelings all the way through Lent. I would e-mail Sister weekly, asking her what this was accomplishing. She just advised me to continue to pray about it. God gave me no clarity at all about it. My soul was in darkness until Good Friday. I had just knelt down to venerate the cross, kissing the feet of Jesus and felt that had been my only act of love for Christ that whole Lent. Upon returning to my pew, I knelt down. A couple of thin tears fell down my cheeks (I’m not much of a crier, so this was a big deal).

There was my God, my Savior, and King, and all I could give Him was nothing. This whole Lent, I had given nothing. But, even through this, even when my own voice cried out “Crucify Him!”, He gave me everything. My life, my vocation, my talents—but most importantly, His own Life so that I could be with Him. Whatever I did or gave (or lack thereof) could not change His free, incredible gift.

It was in that powerful moment that I came to an incredible realization. Following the “rules” of Lent (prayer, fasting, and almsgiving) can be incredibly important, but it’s not the important thing. I found, through doing nothing for Lent, that Lent was really about letting Christ love me. Opening my heart to His Sacrifice and letting Him love me through it. The next time I met with Sister, my tail was between my legs…she had been totally right.

I pray so much, sisters, that you all are able to abandon yourself to the God Who gives us everything—even when we can give Him nothing.