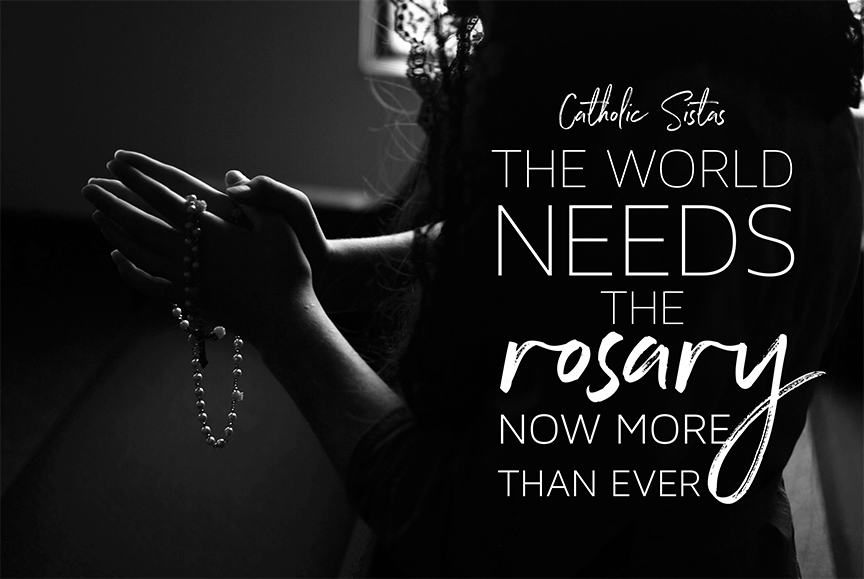 Saint Dominic and the Rosary

Early in the 13th century in a church in Prouilhe, France, Saint Dominic poured out in prayer his grief and frustrations to the Blessed Mother.  His attempts to combat the heresy of the Albigenses were less than successful and Dominic had turned to prayer, weeping, and harsh penances on the behalf of sinners.  Our Lady appeared to him in his distress and encouraged him to pray her Psalter:

“I want you to know that in this kind of warfare, the principal weapon has always been the Angelic Psalter, which is the foundation stone of the New Testament. Therefore, if you want to reach these hardened souls and win them over to God, preach my Psalter.” Our Lady’s message to Saint Dominic

Instructed by Our Lady to spread her Psalter of 150 Angelic Salutations and 15 Our Fathers, Dominic further distinguished the mysteries of salvation into three categories—the Incarnation, the Redemption, and Eternal Life.  Saint Dominic promulgated this new devotion with great success and it is due to the faithful teaching and praying of the Rosary the Albigensian heresy was eventually driven out of Europe.

This past October, our family had the privilege of traveling on a pilgrimage to Europe, visiting several Marian Shrines including Fatima, Lourdes, La Salette, and Loretto. We discovered that the church in which Dominic received the Rosary was along our route between Lourdes and La Salette.  What better way to observe the month devoted to the Holy Rosary and honor Our Blessed Mother’s gift than to pray a Rosary on the very spot it was given to us?

We had no difficulty locating the Basilica of Sainte-Marie de Prouilhe and drove with anticipation down the gravel drive to the church on the grounds of a monastery still occupied by Dominican nuns.  We approached the entry of the church but the doors were unfortunately locked.  A flyer on a bulletin board at a side entrance promised the convent bookstore would open shortly.  Hoping we might eventually gain entrance to the church from the shopkeeper we explored the grounds and waited.  Unfortunately, the shop never opened and we began to sense our pilgrimage was futile. We then decided we could at least pray a Rosary on the steps of the basilica.  As we prayed an elderly sister walked down the drive toward the convent and stopped to speak with us.  She spoke almost no English and we spoke very little French.  She was quite surprised to find pilgrims interested in seeing the church. We came to understand we would not be granted a tour.

The once beautiful and thriving basilica is neglected and has fallen into disrepair.  It broke my heart to even think this historical treasure of the Church has been forgotten.  If only it could be saved.  We read on the monastery website that the community had appealed for donation to save and restore the basilica – 2.600.000 euros is needed to complete phase one of the restoration.  The project has only been able to raise 750.000 euros.  Masses and community prayer are still said in the church daily, otherwise, the apparition site is mostly forgotten.

What the World Needs Now

We live in troubling times. It’s an almost daily ritual to read the news and see stories of powerful men exposed. As frightening predators, natural disasters and the devastation they wreak on helpless people, attacks on innocent tourists and pilgrims, division and turmoil in the Church. Sin, misery, and heresy seemingly increase in our day, and I can’t help but think of the work of Saint Dominic. We need the Rosary more than ever.  We need Our Lady from Sainte-Marie de Prouilhe’s message preached from every corner of the globe.

“The Rosary is the weapon for these times.”

Let us recommit ourselves to frequent, fervent prayer.  Let us wield the powerful Psalter of Our Lady and beseech her intercession in our time of need.  Let us not allow the Rosary to fall into neglect and disrepair as has the lovely church in Prouihle.